So I thought I had wrapped up the week in review then I read Superman Earth One Volume 2 by J. Michael Straczynski and Shane Davis and knew the week was not done yet.  I needed to give this book a little solo spotlight. 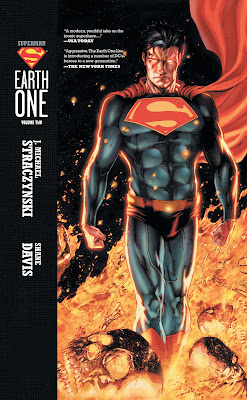 DC has killed the Superman character for years. Outside of All Star Superman, the actual Superman character has been a mess. They married him off to Lois Lane and for awhile it worked. Then for various reasons writers forgot about Clark Kent and therefore the supporting cast. The problem with that is Superman has always been the false identity and Clark Kent is the true persona, in my humble opinion. Oh there have been some good moments, like a few moments by Geoff Johns and Gary Frank in Action comics. Those moments were few and far between for years. Then DC removed him from his book and we had Mon-el running around as Superman substitute, while Kal-El went off to New Krypton. Before the new 52 the same writer of this excellent portrayal of the character did a horrible job of having Superman walk around the country. Putrid, the character that was the cornerstone of the company was a shambles.
Next up we get the New 52 which has been putting more and more nails in the coffin. Grant Morrison’s Action comic version of the character has been a disjointed mess and it is obvious that George Perez was never told what Grant was going to be doing when he was writing Superman. The stories of the editorial mandates and last second adjustment coming out of DC have been all over the place. No one had a back story for the character. Again we get no real supporting cast and the portrayal of the character from book to book had all the consistency of Velveeta Cheese. In the Justice League stuff Johns’ version of the character is totally different from Superman and the Action comic Superman. I think the Superman character has ton of potential but like a rookie sensation can’t hit the curveball. I also understand he is one of the hardest characters to write, but it can be done.  John Byrne did some great work for a few years with him and All Star Superman was the best series ever done on Superman. The problem is that I have not seen a decent Superman character for a long time.

DC was looking for a younger version of the character, for all of their characters when they hit the re-set button. That button has disenfranchised many long time DC fans, young and old, but I’m always willing to read some good stories. Heck, stuff like I, Vampire, JL Dark, Frankenstein Agent of Shade are all brand new concepts and could just have easily been done in the old DCU. Animal Man and Swamp Thing seem to have made it through to the other side with their histories basically unscathed. Batman has been mucked up here and there, but remains at its core the same. Green Lantern has had some retro-cons that have not all been revealed, but again basically unchanged. Wonder Woman was a brilliant new take on the character, even if the WW in JL bears no resemblance. The rest of the old DC characters I don’t even know them and don’t even care about them anymore. Heck I barely care about Nightwing anymore, he is not who I know. Still if you are going to redo it, then it should be done right. Wonder Woman got it right.

Guess what DC has redone Superman right, just not in the new DCU, it is in Superman Earth One. Clark Kent is a young man just getting his start in the world. We have Lois Lane a more seasoned pro at the Daily Planet who is Clark’s competition and a nosy reporter. We have a Jimmy Olsen that actually makes senses as he is a photographer for the paper but a peer of the two and not some snot nose kid. If anyone is the kid it is Clark.

That is the best part of the book, it is about Clark. Clark is a stranger in a stranger world and is slowly learning how to make his way in the world. Can he be with a woman? Can he allow his natural abilities to outshine everyone else around him? Who he is when he is himself is Clark Kent, not Superman. Superman is the hero and even as Superman he struggles with the right and wrong of things. Does he have a right to interfere in a dictatorship? What are the limits of his power? Wouldn’t the US government be worried about such a powerful creature in their midst and be trying to make sure they could control him? Straczynski addresses or at least brings up the points and is addressing each and every question. He is building a cast around Clark that is interesting. He is giving Clark some moral dilemmas that anyone with power and a brain would have to consider. He is giving Superman a powerful foe that could possibly beat him. He is building suspense for the next chapter as he introduces Lex Luthor into the mix with some fun twists on Lex. This is the Superman who I want to read about. This is a Superman that I’m excited to see in comics again. This is the character done right.

Of course any great comic needs great art and Shane Davis is delivering. I liked Shane before he disappeared to only draw this book. Of course each graphic novel is like a six issue run of a normal comic. Shane is pouring his heart and soul into this work and it shows. The detailed art, the strong super hero style, the story telling, the page design, the emotions on the characters faces, the pacing, the action, the quite moments are all done superbly. Shane Davis may go unnoticed because we are only seeing his work once a year or so at this point, but like I said many artists currently can’t produce a monthly book, so this is a great way to get one artist to deliver one great story.

DC should try and redo Superman yet again or just use this as blueprint or use this as the basis for Superman. Heck as long as they produce these novels with JMS and Shane Davis, one of these a year is not enough, but I will be buying them every time. Finally a version of Superman I can get behind and enjoy.
Posted by Jim at Wednesday, November 07, 2012

Email ThisBlogThis!Share to TwitterShare to FacebookShare to Pinterest
Labels: Spotlight Reviews, The Week in Review