Lee: We’ve had so much going on lately that we’ve fallen behind on our normal previews post. Hopefully we can right the ship and get back at it.Thomm: Busy? I only work 2 hours a week of mandatory overtime, schlep my daughter to dance nearly every day, and try to maintain the physical condition of my house and myself. Why would I be busy? 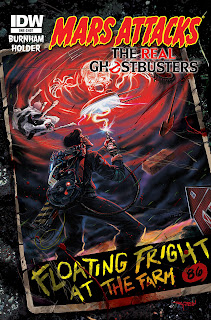 A whole bunch more below the break.  I liked alot this month! 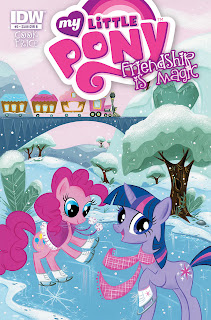 My Little Pony: Friendship is Magic #3
Katie Cook (w) • Andy Price (a) Amy Mebberson, Stephanie Buscema (c)
The Mane 6 enter the heart of the Changeling Kingdom to rescue their friends! Danger lurks everywhere, and each Pony will have to put their best hoof forward if they are to survive the night! Unfortunately that's exactly what the Changeling Queen expects! Will our heroes fall into her trap? FC • 32 pages • $3.99
Lee: I can’t believe this is actually a book… and if I read correctly the first issue sold out!!!! I am shocked there is that much interest in the ponies. Actually, if my girls were younger then I would have gotten it so I shouldn’t be all that surprised.
Thomm: “My Little Pony, skinny and bony…” A parody song my 11 year old son likes to sing. Well, liked to sing more a year or so ago. Not as au courant now. Somehow My Little Pony is on the radar and popular. I’ve no idea why. 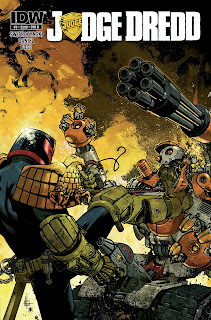 Judge Dredd #3
Duane Swierczynski (w) • Nelson Daniel, Langdon Foss (a) • Zach Howard, Nelson Daniel (c)
In Mega-City One, kidnapping of the rich is a thing of the past, thanks to personal security droids. But a ruthless team of high-tech snatchers has come up with a cruel twist on the oldest racket on the books. They don't nab you. Just... a certain part of you. But the kidnappers may regret holding one of the city's most prominent citizens for ransom, because Judge Dredd's just signed on to be the bagman! Plus: A shocking backup story with art by Langdon Foss that will leave you seeing double... FC • 32 pages • $3.99
Lee: Ok, if you haven’t figured it out yet I am a huge Dredd fan so I’ve been looking forward to this series for a while. Swierczynski is writing a great story for Valiant’s Bloodshot so I’m thinking this is gonna be great. That being the case, this cover sucks! There are very, very few times that you want the back of your main character showing on the cover. And, this isn’t even a pure back shot, it’s more of a side back shot. Terrible.
Thomm: I got nuthin’. I’ve never been a Dredd fan. Nothing here is making me start now. 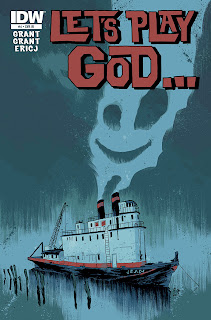 Let's Play God #4 (of 4)
Brea and Zane Grant (w) • EricJ (a & c)
Punk is dead. You're next. A girl's ultimate descent into a world of blood comes to a close. After all the twists and turns, the killer is finally revealed! Find out who lives and who dies in this brutal climax! FC • 32 pages • $3.99
Lee: How did I miss this along the way? I wonder if there is a review out there on the first issue. Well, IDW is known for its horror books and this sounds/looks good. Ok the cover looks good and the description is kinda generic but I really like the title… so I’ll call it 2 outta 3 are good enough for me.
Thomm: Way too generic for me to get a handle on its quality. I do agree about the title, though. Of course, we’re all god every day. We made the stories, after all. 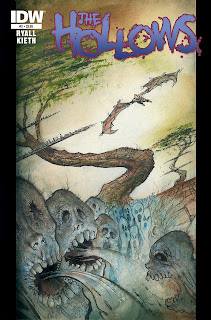 The Hollows # 2 (of 4)
Chris Ryall (w) • Sam Kieth (a / c)
Chris Ryall and Sam Kieth continue their crazed collaboration with The Hollows, Part 2: "Taking Flight." When living above the chaos and soul-stealing "hollows" is no longer an option, can Kobayashi manage to rise above the impending doom that surrounds he and his loved ones...?  FC • 32 pages • $3.99
Lee: Speaking of horror, wow oh wow can Keith generate a creepy cover. I’m waiting for the trade but I am so gonna check this out.
Thomm: And an English challenged blurb, whoever wrote it. “…rise above the impending doom that surrounds him and his loved ones…” Then there’s the issue that he lives above the danger and he’s supposed to rise above the doom. Does that mean he’s just rising higher above the doom he already lives over (pardon the dangling participle)? This kind of poor writing in the promo just makes me uninterested in the content of the book. 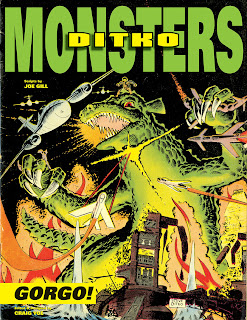 Steve Ditko's Monsters, Vol. 1: Gorgo
Joe Gill (w) • Steve Ditko (a / c)
The genius artist Steve Ditko is a towering monster of awesomeness...and so is the character he chronicled....GORGO! If you love Godzilla–and who doesn't–you'll love Gorgo who ravages London, New York City, and HOLLYWOOD! Gorgo goes head to head with the British Navy, atomic bombs, Communists, and aliens from the planet Corpus III! This is the complete Ditko Gorgo, 200 pages of comics, including 6 pulse-pounding covers all drawn during the height of Ditko's prowess concurrent with his Spider-man and Dr. Strange creative explosions. Scripts are by the fan favorite writer Joe Gill. Introduction by Eisner award winner Craig Yoe with fascinating insight into the comics and the monster movie that inspired them. Every page is lovingly restored and the book is a large format 224-page hardcover to showcase the monstrous Ditko art. HC • FC • $34.99 • 224 pages • 8.5" x 11"
Lee: Jim and I were talking about this. Believe it or not I am going to pass. I think I have every Kirby HC reprint out there… but I think I’ve had my fill of Ditko. Not to mention I’ve read some of these books. They really aren’t good. That’s not fair, the stories are unintentionally hilarious if you like that. And to be fair, it is some of Ditko’s best work. But I’m still not getting it.
Thomm: This is a book for the art lover who has an affinity for Ditko. It’s not a book you get for story. As a story guy, I’ll pass.

LOAC Essentials, Vol. 2: The Gumps: The Saga of Mary Gold
Sidney Smith (w / a  / c)
In the late 1910s, Sidney Smith developed a formula of the daily strip that would make The Gumps one of the most popular comics of the 1920s and himself one of the richest cartoonists of his day. By the end of the decade Sidney Smith's The Gumps had secured a huge and loyal audience with a decade of melodrama, adventure, mystery, and comedy. So devoted were his readers, in fact, that they regularly wrote in to offer advice for his characters' love lives and business decisions and they generally treated the characters as friends and family members. In 1928-29, with the launching of what would be his most famous story, "The Saga of Mary Gold," Smith's relationship to his readers would be tested as never before. Its heartbreaking conclusion would change comics forever. Here for the first time since the story made headlines across America in the spring of 1929 we reprint the saga that Hogan's Alley magazine called "One of the Ten Biggest Events in Comics History"—a tale that has lost none of its power to captivate readers in the 21st Century. HC • B&W • $19.99 • 336 pages • 11.5" x 4.25"
Lee: I love these collections of old story lines. Besides great art, and really good stories, these collections provide a real slice of life at the turn of the century. Both fun and educational. It’s hard to beat that combination.
Thomm: This looks like a winner to me. I love history. I love slice of life. Better yet, I know nothing of the strip, so it’s an entirely new experience. Sold! 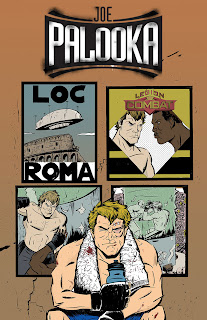 Joe Palooka # 2 (of 6)
Mike Bullock (w) • Fernando Peniche (a) • Marat Mychaels (c)
The vice tightens on MMA fighter Joe Palooka! While being hunted down for a murder he didn't commit, Joe tries to lay low but ends up fighting for his life a bully Khan in "the circle," where only the most violent disputes are settled. Set in the dangerous world of top-tier mixed martial arts, this series will get you in its grip and will not let go until you tap out. FC • 32 pages • $3.99
Lee: I am not sure that I buy the concept of Joe Palooka as an MMA fighter but it is a good updating of the character. My interest is piqued but I am not sure that Mychaels J Bone/ Darwyn Cooke inspired cover art is what I’m getting on the inside. Peniche has a great style that is far more realistic and I’m not sure I want realism in my art for this story.
Thomm: Somehow this makes me think of Superman fighting Muhammad Ali. I’m not an MMA fan, either, so I’ll wait to see what the word is on this when it concludes in a few more issues. 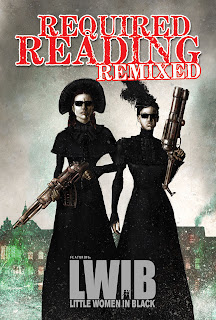 Required Reading Remixed, Vol. 1 Featuring Dread Island
Joe R. Lansdale, Rio Youers, John Shirley, Mike Resnick and Nancy Collins (w) • Mike Dubisch (a) • menton3 (c)
Cultural icons as you've never seen them before–remixed for your pleasure. Huck Finn vs Cthulhu, Billy the Kid meets Frankenstein, Poe vs The Doors, Albert Einstein: Nazi fighter, and Captain Ahab in the Great White North! TPB• BW • $4.97 • 140 pages •
Required Reading Remixed, Vol. 2 Featuring The Fairest Of Them All
Sean Taylor, Chris Ryall, Mark Morris, Kristine Kathryn Rusch, John Skipp and Cody Goodfellow (w) • Mike Dubisch (a /c)
Alice vs Snow White, Asgard 90210, The Sex Pistols vs Voodoo, Dickinson and Death, and Dr. Moreau vs Holllywood!  TPB• BW • $4.97 • 148 pages •
Required Reading Remixed, Vol. 3 Featuring Little Women In Black
Lezli Robyn, Louisa May Alcott, Rick Hautala, Thomas Tessier, Tom Piccirilli and Marc Laidlaw (w) • Mike Dubisch (a) • menton3 (c)
Android of Green Gables, Little Women in Black, Sen. Joe McCarthy vs Killer Frogs, The Mob vs Witchcraft, and Anime run amok!  TPB• BW • $4.97 • 140 pages •
Lee: . If you can sell Pride and Prejudice and Zombies then it really was only a matter of time before we got books like these. I am always up for some good silliness and 140 pgs for $5 is a good deal. I’ll try one and see what I think before committing to them all. It’s a tough call, should I go “The Sex Pistols vs Voodoo” or “Huck Finn vs Cthulhu”
Thomm: I want to see “Poe v the Doors.” Do they stagger into one another? Does Poe write desperately sad commentary about Morrison’s libidinous exploits?

Lee:  There's a lot of good stuff from IDW this month.  I am not really sure where to start.
Thomm: The Gumps book is the highlight for me for this month. I usually get these sorts of things as I spot them, but I may well order this one.
Posted by Lee at Wednesday, November 14, 2012