This week I have too many books to be able to read everything so some will not make the cut. Overall I give the week a C+ based on what I read. It suffered from comparison to last week, but there were a lot of really good books but too many blah books. Onto some quick quips on each book I read. 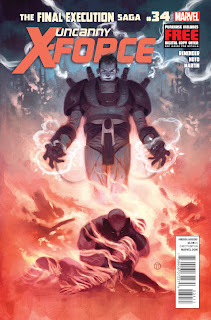 Uncanny X-Force #34 is limping to a close. This book was a great series and Phil Noto is a fine artist, but the two are not fitting and it is to the detriment of the book.

Wolverine and the X-Men #21 was garbage. I checked in as I had read the book was good, but this felt like a poorly done rerun of work done better by Claremont and Byrne years ago. Also Nick Bradshaw’s art has a lot of issues.

Nightwing #14 was okay, but I get tired of the incompetent hero. I understand the danger level is supposed to be high, but Dick was outflanked on every turn in this issue. I want the hero to succeed. 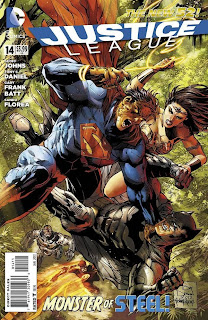 Justice League #14 was a waste of paper. This book is not ringing true at all and is failing on many levels. Sadly it has me staying with the book as I continue to hope it can come together. Johns has shown in the past he can pull off good stories, so I hope the series just needs time to live up to its potential.

Avengers #34 ends the Bendis run on the book. The series under Bendis was turned into the central focus of Marvel Universe. It had a lot of fun moments and a bunch of clunkers; this issue was an example of both.

Wonder Woman #14 was another great issue and a prelude to a return of the New Gods. Tony Akins is an okay second artist, but I prefer Cliff Chiang. I’m just constantly amazed that DC is finally producing a WW series that I can truly enjoy. 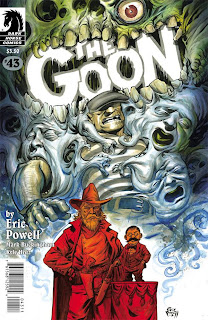 Dark Avengers #183 is almost ready for the chopping block. The story was way too long and now the decks have been cleared for the next iteration of the book. Not sure if I will check it out or just pass.

Legion of Super Heroes #14 was okay and only makes the cut since Giffen is coming back with issue #17.

X-Factor #247 is my last issue of this book, yet again. On the strength of a friend’s recommendation I checked out the last few issues and while it was enjoyable I’m just not into this book anymore. It’s me, not you. 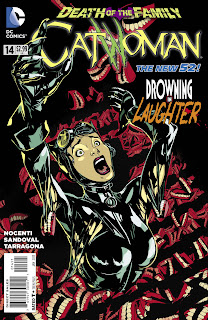 Catwoman #14 the worse example of a cross-over and why ancillary books are often a waste of money. It has the Joker in it, but the Joker is almost supernatural with all he puts Catwoman through. The art was wonky and often hard to follow. This is not a book I will be getting until a new creative team comes on board. Thankfully this was the last issue of this book that was part of the Death of the Family thing.

Fables #123 was a great issue. I loved the Big Bad Wolf two part story and the resolution of his destiny was well done. I can live without the two pages of back up story. I find it impossible to follow a story with just two or four pages a month.

Sword of Sorcery #2 is a decent book. This is not my usual type of book and I almost need a scorecard to follow the various houses but the art is strong and the story has me interested at this point. The modern Beowulf tale as a backup story is also very enjoyable. Somehow I wonder if the comic market place will support this book, but I’ll follow along for now.

X-O Manowar #7 was another good issue. I like how this story is a natural progression. It feels like it will ultimately have to have an endpoint, but that could be 30 or 40 issues in. Many series have a premise that has an unlimited ceiling; this story feels like it should have an endpoint. X-O and Ninjak are now allied with a member of the Vine in trying to save Earth from the forthcoming invasion. The book has strong writing by Robert Venditti and strong art by lee Garbett and Stefano Gaudiano. 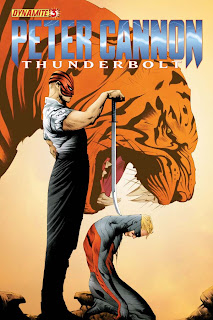 With Peter Cannon Thunderbolt #3 this book has found its rhythm. It was an excellent issue that flowed from last issue and continued to build the series. I enjoyed the seeming madness of Peter Cannon as he was talking to what turned out to be an empty chair. The Jae Lee covers on this book are just flat out gorgeous.

Number 13 #0 is a reprint of some Dark Horse Presents material and set-ups the three issue mini-series. It is a post apocalypse setting about a young boy who is a weapon in a world of mutated monstrous humans. Think I will pass on the mini-series.

Batwoman #14 has beautiful artwork. The problem is JH Williams designs are so elaborate as to make reading the story at time impossible. On top of that it is severely overwritten. I’m off this book as soon as Williams stops drawing it.

Birds of Prey #14 is a good action/adventure book, but I’m just 100% into this book. I think the unfamiliar / familiar characters created by the DCU reset is interfering with my enjoyment of this series. Overall it is good enough to stay on my list.

And that will have to be a wrap. I ran out of time this week and failed to read BPRD 1948 #2, Harbinger #6, Revival #5, The Spider #6, Hellblazer #297, Baltimore The Play, Mind the Gap #6 and The Shadow #8. If anything is tremendous or atrocious I may mention then next week.

Come back next Monday and we will do it all over again.
Posted by Jim at Tuesday, November 27, 2012