The Secret (Post-Crisis) Origin of the Metal Men (circa 1993) 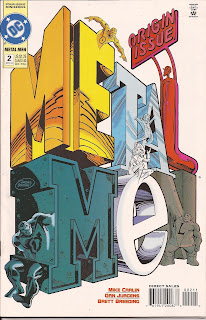 With apologies to Don Fransciso, I’ve “Got To Tell Somebody”!  You see I’ve just learned the TRUTH!!!  And to echo Charlton Heston’s raspy shouts at the end of his 1973 SyFy classic, “[THE METAL MEN] ARE PEOPLE!!!”  And I’m just as upset about it as he was…

You may recall a few weeks ago that I did a post introducing the Metal Men (the most exciting new comic discovery for me all year).  To date I’ve finished the first DC Archive volume as well as the five Walt Simonson issues from 1976 with hopes to elaborate on both sometime in the near future.  Needless to say, I’ve gone Metal Men bonkers and am endeavoring to acquire all of their pre-Crisis guest appearances, the 2007 mini-series, and quite possibly some action figures (check out the planned Platinum release soon).  In the process I stumbled upon the 1993 mini-series by Mike Carlin, Dan Jurgens, and Brett Breeding – “The Team That Killed Superman”.  In that four issue series the origin of the Metal Men is explained in a brand new way.

I still like Dan Jurgens’ storytelling today (see last week’s Firestorm #13 review), but around 20 or so years ago he was really turning out some top-notch material (see my archived Dan Jurgens JLA post series from awhile back – parts 1, 2 & 3 – perfect reading to commemorate the 20th anniversary of The Death of Superman later this month).  And really this series continues in that vein with the same great art.  However, instead of Dan handling the writing himself, this time Mike Carlin (the Superman group editor) does.  I know I’ve already given away the secret up above, but I really wanted to highlight some of the issues I had with the revelation, rather than go into an issue-by-issue synopsis.

As I mentioned in my Intro post the things I like most about the Metal Men are their personalities and Magnus’ relationship with Platinum (a.k.a. Tina) even though he’s always trying to push her away.  And I found out something in the 70’s revival that I didn’t realize before concerning their “components” – namely, that there aren’t any.  They’re just a hunk of solid metal with a responsometer in their heads, which gives them their shape-shifting abilities.  That little tidbit of information made a lot of (comic book) sense, even though it still doesn’t explain how they increase their size so much.  I know they can be stretched to great extents, but what they do would actually require an increase in mass I think.  Anyway, the 1993 series comes up with some ingenious reasons for why everyone acts the way they do.

The nice thing about the new origin is that it is crafted in such a way that it doesn’t really negate anything that came before (except for I imagine some minor details).  Doc Will Magnus was not the sole scientist working at his automated lab.  There were four others: his brother Mike (Gold), his brother’s wife Sharon (Platinum), Redmond Wilde (Mercury – still a bit of a jerk), and family-man Randy (Iron).  They were all working together to create the Metal Men (who were all originally male by the way), but they were stuck at “Phase Seven”.

Sharon wanted them to try the responsometers she designed, but her workaholic husband thought that they needed to be combined with the “Deprivation Rays” despite the danger.  Will is much more in tune with Sharon’s feelings and you can tell that they’re on that dangerous road of being intimate without being intimate yet (the flesh hasn’t weakened yet, but their hearts certainly have).  Meanwhile, their custodian Tinkham (Tin) is ordering some pizza to be delivered by Jack (Lead) who arrives just in time to see Mike in agony from the D-rays.  He merges with the Gold form, but can’t control it, shattering the protective glass and exposing everyone else to the rays.  Magnus is the only one who escapes unscathed (physically at least).  All the others, now trapped, merge with their respective forms; however, the transformation is sheer agony for them.  Will quickly uses the responsometers, which serves to make them feel neither pain nor emotion with the exception of Tina’s “faulty responsometer”.  They start to lose their memories too, but not before Lead changes his chemical symbol to a more recognizable “L”.  The problem is their human forms are all dead or nearly so.  Doc has them bring their bodies down to sub-basement 12, where they are kept on ice awaiting the day he can return them to normal.

So, Lead’s “L”, the source of the diverse personalities, Tina’s affection, Magnus’ (now guilty) rejection of her advances, and his solitary determination are all skillfully explained. It really does make a lot of sense.  I’d even say that it borders on brilliant.  Unfortunately, it also tarnishes (pun intended) the charm of the characters.  For one, I didn’t like the near-adulterous affair of Will and Sharon.  I also didn’t like that Will wasn’t the super Reed Richards of the DC Universe.  In fact, he really seems diminished when you stand him next to his scientist peers.  He didn’t create anything on his own, not even the responsometer!  The characters are also more tragic with Iron losing his young family.  He goes to visit his kids and discovers they have a new step-Dad.  While most of the metals (a little too conveniently) embrace their new identities by the series end, they all still retain their full human memories.  That’s just not the same for me.

Oh, and another big event.  Gold dies.  You see, once their human bodies were destroyed (at the end of issue 1) they can no longer be rebuilt from nothing (if their responsometer is damaged).  And Magnus ends up dying too, but not before he becomes a new kind of Metal Man using an alien metal. At least he’s able to finally be together with Platinum.

It was an entertaining story, but I’m guessing it didn’t really “take” in the post-Crisis DCU as I don’t recall ever seeing the Metal Magnus again.  It’s just as well I suppose.  I asked my daughter, Faith, and fellow Metal Men aficionado, if she liked them better as just robots or as humans who turned into robots.  We both agreed “Just Robots!”