No grade for the week yet, that is for Part 4, but these four books were very good. 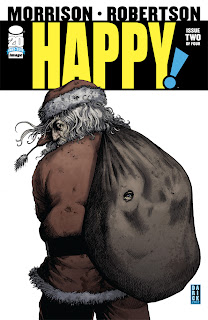 The best of the week in my mind was Happy #2 by Grant Morrison and Darrick Robertson. It starts with Nick breaking out of the mob hospital, then Nick playing in a crazy card game, and ends with a nasty Santa Claus who is kidnapping children. It has blood, violence and bad language and it also has Hailey’s imaginary friend a small blue donkey with a unicorn horn and wings who is helping Nick out at every turn and trying desperately to get Nick to help save Hailey. I keep hearing Eddie Murphy’s voice from every time the blue guy speaks to Nick, blame Shreck movies. Darrick Robertson’s art is stellar as his realistic style is perfect for all the serious stuff and his depiction of the blue donkey is a wonderful cartoon that makes such a jarring juxtaposition with the rest of the book. The cartoon blue unicorn donkey super imposed over the violent and alcoholic ex-cop killer for hire Nick is perfect. The humor and over the top violence make this book a very unique and pleasurable read. Nick is the most unredeemable bastard you could meet. He promises stuff to get what he wants and immediately goes back on his word. One of the funniest lines is when the blue guy (I’m guessing he is Happy) tells Nick if he does not save Hailey she will die. Nick’s reply was: “Hailey is never going to grow up a bitch and make some slob’s life a living hell, boo-f**king-hoo.” In our PC world this type of harsh rhetoric is usually edited out of books, so it makes it great to see it added to this book. It is the character and it helps define him. The use of the violence and language by Morrison never feels like it is shock for shock value, but it used to further the story and build the character. Between this and Punk Rock Jesus we have had 2 great mini-series to look forward to at the end of the year.

American Vampire #32 by Scott Snyder and Rafael Albuquerque was another terrific issue. Each issue is bringing a new twist and turn. Pearl who betrayed Henry in a fit of blood lust and rage is captured by her old roommate Hattie. Hattie tells us her story of how she rose to be Queen of this coven. At the same time we find out that Skinner is part of the plan and has his own plan to take out VMS. Skinner being the betrayer yet again should come as no surprise, but I’m thinking Henry can’t have long for this world unless someone turns him. AV is a great series and while Scott is doing a lot of good and sometimes great work, this book may still be his best. I feel like a broken record when talking about some books, but AV is so solid month in and month out that I can’t help but sing its praises.

DC delivered a bunch of annuals and two of them made this part of the review.

Swamp Thing Annual #1 by Scott Snyder (I recognize that name) and Scott Tuft (hey didn’t he write Severed with Snyder) and Becky Cloonan bring us a tale of Alec Holland and Abigail Arcane that was wiped from Alec’s memory. The more I read of Snyder’s Swamp Thing the more I want to re-read the original run and Alan Moore’s run because I believe he is building on both. Snyder seems to have back stories written or he is a master at just adding parts as he goes because this was a nice story that showed how Alec and Abby are star crossed lovers and a meant to be type of thing, which makes her apparent demise all the more devastating. Swamp Thing has been a slow build up but all the back story is paying dividends as the Rotworld saga is in full swing. Becky’s art, as always was great. She has such great line work and a clean style that is very easy to read and follow. I’m glad to see she is getting higher and higher profile projects.

The fourth book is Justice League Dark Annual #1 by Jeff Lemire and Mikel Janin. This issue wrapped up the Books of Magic story line and did it superbly. I had read a rumor that Lemire was leaving and it was false, which I was happy to hear. Bleeding Cool can really ruin your day when they try to read something into things and missing. Anyway, JL Dark has been very good under Lemire and the way this ended with setting up some new questions at the same time was very well done.