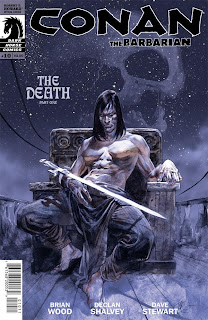 The last two issues I was thrown off by the art change mid story arc, this issue we return to the sea as Conan and Belit are back on the Tigress. I have read this is planned as 25 issues or so and is basically a long chronicle of Conan’s time as a pirate. I think it is a great idea and Brian has done a terrific job with the book.
Ultimate as most stories are it is about Conan and Belit and their relationship. It has changed from one of Belit being the commanding force in the relationship to one where Conan and she are almost on an even keel (unintended pun). The passion remains between the two but there is an underlying difference and the seed for the end of the relationship already can be seen.

The Tigress and her crew are being killed by their success. For the most part these are people who live from day to day and the glory of bold strikes and blood thirsty raids on ports and other ships is their life blood. They have been so successful that no one wants to fight them and are willingly surrendering and giving them whatever goods and gold they have to give.


It is almost a death knell for the Tigress as when you embark on this type of life you are never expecting to actually live that long and have no plans for what to do with your life. The crew and Conan are almost unsure of what to do now.

A small ship on the horizon is about to change everything. A small ship with one person still barely alive is found and brought on board. In a few days they realize they have a plague on board. Conan discovers this as he comes up from his cabin wondering why the crew has not docked as they have reached their port of call. I love the idea of this story as nothing is more frightening to an ancient culture then a disease of a virulent nature. These are people of action and adventure who will fight anything, but you can’t fight a disease with weapons or strength of arms.

DeClan Shalvey is the artist this arc and his work looks very good. He is not an artist of any great renown but this is some of his best and is enhanced by one of the best colorist in the business Dave Stewart.

Conan is a book that I love at certain time and Brian has done a great job in doing a different take on the character while remaining true to his basic nature.
Posted by Jim at Tuesday, November 20, 2012