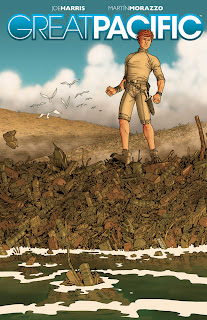 Great Pacific #1 by Joe Harris and Martin Morazzo got off to an excellent start.

Number one issues have the advantage of being a blank slate so that it is new. New is usually always a big plus as a new thing of any type is after all bright and shiny and new. Of course it also has to meet the burden of being new. New out of the box that doesn't work is worse than the old thing that is not working for just a little while.

Great Pacific has to set the premise and give us a reason to come back. It has the burden of not having any familiar character to draw us in. Also, let’s face it Joe Harris and Martin Morazzo are not stars in the industry. Joe has certainly been around and done work in film and comics but has yet to have that signature series. Martin Morazzo is a total unknown for me. Both delivered a very good opening issue.
Starting with the art first. Martin does the art and colors. The coloring part is well done and the art does a good job of conveying the story and makes the book an easy read. At times I think his ability to make enough of the characters distinguishable is not there and most of his design and layouts are standard but it is very professional. I have no clue as to what level of experience he has with comic book work but I look forward to seeing him progress over time. If you look back at many artists their initial work is often rough compared to how they get as they learn to hone their craft.


The story itself is a great start and has the potential to be both entertaining and enlightening as Joe is putting forward information that could feel a little preachy, but started off very well done. I have no problem with a point of view being expressed as I have learned a lot from reading comics and even had my opinion changed by stuff I was exposed to by a writer. My feeling is just make it part of the story and do not stand on a soapbox and preach to me.

As with too many stories we start at in the future (only two weeks) where our main character Chas Worthington III (was this an X-Men pitch at one point?) is washed up on a massive pile of trash located in the Pacific Ocean and a two headed bird wakes him up. We then cut back and learn about Chas. He is wealthy beyond all imagination and the heir to a vast fortune. He also is apparently a genius who has his own agenda. Chas has an unknown scheme that he plans to put into play but first nears to disappear off the grid. His confident and man Friday is his brother Alex. Chas plans out his death to disappear. He also appears to be sabotaging the company he inherited.

We know the story is going to have an ecology theme and we know that Chas is a brilliant rebel who has rejected the culture of what he was left. What we don’t know are what are the plans and what level of danger is Chas going to be in has yet to be determined.

This is a great first issue that draws you in and leaves you wanting more. My one question is does this have the potential to be an unlimited series or is this more of a good long story?
Posted by Jim at Tuesday, November 20, 2012