Another week, another lame intro.  I saved all my words for the reviews...  That's my story and I'm sticking to it.  Just two books this week, Chico and Rita and King City.  Both very good in completely different ways. 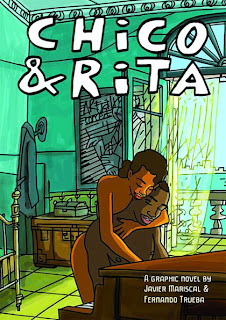 In case you weren't aware, this is actually the comic adaption of the Spanish, animated film of the same name.  I'd heard good things about the film, and it was nominated for 2012 Oscar, so I thought I would give the book a try.  You can see the movie trailer, and hear some of the music here.

You can see what I thought below the break, and hear about the other book I read this week, King City.

Chico and Rita is a love story.  In 1948 Cuba, Chico is a piano player with talent.  All he needs to make it big is a singer.  And he finds the best on the island in Rita.  So begins a torrid romance that is as turbulent as it is passionate.

These days, most romance movies are actually rom-coms.  They are light pieces of fluff meant to pass and hour or two.  This is not a rom-com because... well, there really isn't all that much com in this.  It's an excellent story about two people falling in love.  It's about two hugely talented people whose egos get in the way of the thing they love most in the world, each other.

Trueba has crafted a tight story that manages to hit all the right notes emotionally and at the same time slip in some bigger issues such as racism.  The other issues don't overwhelm the story but they make for interesting sub plots.

Mariscal's art is fluid but not cartoony.  The cover captures his style perfectly so if you like that, then you'll like the rest of it.  The colors in the book are amazing too.  They are bright and shiny in all the right ways and really help draw you into the book.

If you like grand sweeping stories about people living their lives then this the book for you.  My only hesitation is the fact that music plays such a big role in the movie.  And, you can see how Mariscal tries to evoke the sound of music in his art.  Unfortunately art is a static, visual thing and although he does a great job of incorporating music into the art, you still can't hear it.  It won't take away from your enjoyment of the story but I wish there were a soundtrack I could have listened to while reading it. 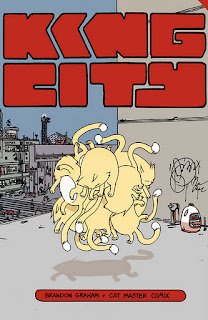 If there were a definition of the phrase disastrous publishing schedules, then King City would be the description.  It started at Toykopop as part of their new manga push, and ended up being completed over at Image.  It's been a long and windy road but it's been worth the wait.

This is manga comix done American style.  Very simply, it's about a group of friends in King City.  Joe, our hero is a master thief and catmaster.  He steals whatever he is paid to steal and has a cat that can well... do just about anything.  His best bud Pete happens to fall in love with an illegal alien.  Like from another planet and breaths water alien.  And there's, Anna, Joe's ex, and her new boyfriend Max who has a minor addiction problem.  King City is the story of their lives in the city and all the crazy stuff that goes with it.

Wow, oh wow was this fun.  Graham has created an awesome story about people being people in a far off, technically advanced city.  The most amazing thing is that the characters are all so real and their problems are everyday problems that everyone has.  They just happen to have jet packs, laser guys, and a cat that does higher math for fun.  Other than that, they are just like you and me!

Besides making the characters likable, and relatable, Graham manages to make the story very life like.  There is danger and tension but it isn't on every page.  The characters aren't rushing from one giant explosion and life threatening situation to the next.  There are points when the characters are just people.  Just people having fun, and that makes it special.

Graham's art is fantastic too.  It's smooth and fluid and influenced by manga.  But, I never sensed Graham's manga influences overwhelmed his own style.  He also crams the backgrounds full of little details.  There wasn't a wall that doesn't have some sort of silly graffiti on it that I was trying to read.  Amazingly this didn't overwhelm his story telling either.  It was just nice filler that made it all the more interesting.

Interestingly enough you can feel the erratic publishing schedule in the story.  This was published over such a long time that you can sense Graham's changing sensibilities and even direction of the story.  At the same time, you can feel him growing as a writer.  Overall this is a fun package that really, really entertained me.