The week itself gets a B+, now as you read my remarks for everything else you may think the grade was a little high, but very few books were just plain misses and a lot of very good books makes the overall grade what it is. 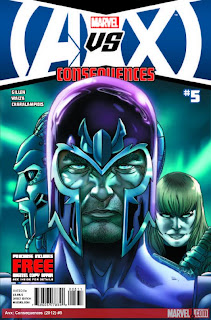 AvX Consequences #5 (of 5) – One hell of a long epilogue and it ultimately is just setting up the next iteration of the Uncanny X-Men title. I like how we will have the young Cyclops and now a fugitive Cyclops both around at the same time. Not sure how thrilled I am that Bendis is handling both books. Bendis has some really great ideas, but his execution lacks at times and his dialogue can be just plan horrible.

Avengers #33 is wrapping us Bendis’ Avengers work and this book is focusing on bringing back the Wasp from the dead since fans have been clamoring for it (haven’t they?)

Age of Apocalypse #9 has the distinction of being a book that I keep questioning why I’m getting it. I’m not following the plots closely, the characters are not all defined well enough for me, the art is muddy and over colored, yet I find myself intrigued by enough of the characters to hang in there. The $3 price tag makes it a keeper also, because this many borderline issues can make a $4 book disappear.


A small aside, with the $4 price point becoming the norm, it also makes it easier for me to drop a book. Price is not the only consideration. If the title is well done I probably gloss over the price point, but if it is questionable in anyway the $4 book gets cut first. It is also of interest to me that the digital price point has remained as high as it is. While all reports show a growth in the digital marketplace I’m betting more pirating is going on than if the price point was lowered. And now we return you to our regularly scheduled programming. 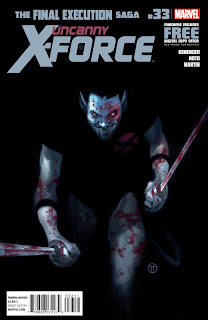 Uncanny X-Force #33 I read on my computer. I have started to collect the free digital versions of Marvel books for no real reason other than to cash in the coupons and give my store some sort of credit from Marvel. I decided to read it on my computer and the experience was not that bad and actually works well when I went panel by panel. If I had an iPad or something similar I could see reading comics this way. I can’t see paying the same price for a digital version. A good series coming to an end and unfortunately Noto’s work is not fitting the tone the book has established.

Earth 2 #6 – The first arc wraps up and still no official team has pulled together. The thrill of this book has left me and while I’m okay with the title it is not a must read.

Action Comics #14 was garbage. Truth be told I have checked out on this book as it never hit the right stride for me. Too many time jumps and artist changes, I got lost and no longer cared about it. That is hard for me to say as Grant Morrison and Rags Morales are both favorite creators. I’m hanging on to give the next team a chance before I drop the title. It was better than Superman, but the books never lined up.

New Avengers #32 – More of Bendis’ wrapping up his story line, just not sure what the heck he is trying to wrap up here. 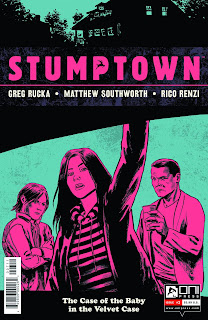 Stumptown #3 – I love this series but this issue had the dreaded middle chapteritis. It moved the plot forward but was also setting up the finale. Middle chapters are not bad and are of course needed, they are just never the wow books in a series.

Guarding the Globe #3 – This series is one where I have to try to remember what happened in the last issue. Still the cast is fun and the group is coming together. Heck it is better than Justice League.

Fairest #9 – Wow Rapunzel led a very interesting life. This is a very enjoyable spin off and I’m glad to see Willingham’s world being played in by other writers.

So that puts a wrap on this week and I managed to put out four parts again. Of course today’s parts were both a lot shorter, but once I see how the week breaks up I type up each one and try and let it be a natural flow. I wish I had more time to give some truly detailed views and analysis of various books, but I can only allot so much time to this endeavor.
Posted by Jim at Tuesday, November 13, 2012