I’m not big on horror movies and can’t say that I am a big horror fan, but surprising a lot of what I buy or at least this week’s pile has horror or horror elements in it. Heck the five books included here all have to be considered almost straight horror books. I guess what it comes down to is I like to look for good stories and genre is only one consideration in my decision process. First up is Bedlam #1 by Nick Spencer and Riley Rossmo. I’m a huge fan of Rossmo’s art and I want to like Nick Spencer’s work more than I do.  I know that creator owned stuff is the best way to go for most of these guys, but I still believe they would benefit from a good editor. I guess trying to hire an editor is beyond the budget of most of the people involved. Anyway Bedlam has a lot of Batman versus the Joker in it and in other ways it plays as a straight horror book. The bad guy is a psychopathic killer of extreme magnitude. They start 10 years ago and show the brutal scene of a mass killing at a movie theater. A Batman like characters comes in to take out the bad guy. Not sure of the need to do the whole Aurora, Colorado deal, but okay we get that he is a bad guy. It is not just him; he leads a group or perhaps henchmen. We then jump ahead ten years and begin a madding sequence of back and forth time jumps that destroy the narrative flow of the story. The present story line appears to be about the same bad guy who now is apparently been released and perhaps is on medication. He is floating around town and almost forces some tough guys to shoot him, has a flashback or hallucination about dying and calls the police and the story ends until the next issue. Spencer loves mystery and being vague, you can call it challenging the reader or you can call it poor story telling. Rossmo’s art will keep me around and hopefully the story will be clearer in time. Personally I think an editor would have told him tell the past story first, and then tell the present story and layer in past pieces more as a page or two at a time instead of panel by panel at times. Also I believe the story had flashbacks and hallucinations and the method of demarking “what was what” was not 100% clear was. It is almost like Spencer is fighting himself as there are some good ideas in the story trying to breakthrough a weak story structure. 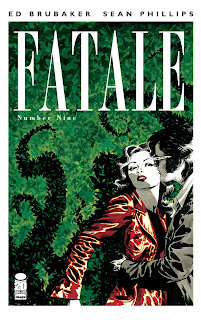 Fatale #9 by Ed Brubaker and Sean Phillips continues its excellent run. Ed now says the book will go 20 issues or maybe more. At this point as long as the book has an ending I’m fine with it being stretched out. With many of Brubaker’s Marvel super hero stories the stretched out portion felt like filler, here it feels like each chapter is adding depth to the story. Sean Phillips is the perfect noir artist and his work with Dave Stewart’s colors is so well done that I take it for granite. I know going in the book will look great and read well. Going into a plot summary is worthless and the only possible issue one could have with the book is it is not an easy book to jump into; it is better read from the start. The horror elements are understated in some chapters and in this issue you could forget that it had those elements. All in all Fatale is one of the best stories that the Brubaker/Phillips team has produced. Oddly enough, even with tons of great work that Brubaker has produced I still think his signature work is yet to come. 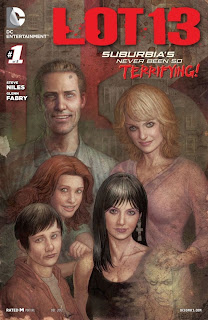 Lot 13 #1 (of 5) by Steve Niles and Glen Fabry must be a left over project from Wildstorm before it was totally absorbed under the DC banner. It does not feel like a Vertigo book at all. I think Steve Niles and Chuck Dixon have a contest to see who can write for the most publishers. This book is all set up and it is well done. We should get into more of the haunting next issue. It starts in 1670 where the townspeople kill the already dead family for the crime of suicide. It is gruesome and bloody ending with a mass grave and as the dirt is being shoved over the grave an eye opens. Cut to today and a family of five is moving out of the city into their new house. Their house is not ready and they have to go to an oddly structured hotel. Little ghostly things are happening around them during the entire story, but we are not sure why this family is attracting these ghosts and what danger the ghost brings. Solid story telling (Dear Steve please edit Nick Spencer’s work) and strong art by Glen Fabry made this an easy choice to add to my list for the rest of the series. I would love to see Niles do more straight super hero work. 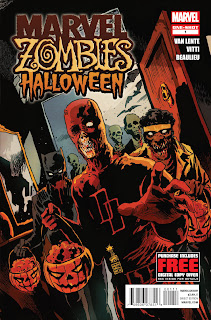 Marvel Zombie Halloween One Shot by Fred Van Lente and Alessandro Vitti was from a week or more ago, but I just got it this week. Set in the Marvel Zombie world it is a surprisingly touching story of a mother and her son surviving in this post apocalyptic world and their celebration of Halloween. The surprise of who the mother is was a nice touch and made a story of zombies into a touching character piece. I always enjoy that writers like Van Lente seems to always put forth his best effort even on books commissioned just to feel a marketing need.

Rachael Rising #12 by Terry Moore was another great chapter in a fun series about witches and demons. Another book that you need to read from the start, but another series that is more than worth the price of entry.

This stuff is all horror based, but none of it is horrible.
Posted by Jim at Monday, November 05, 2012