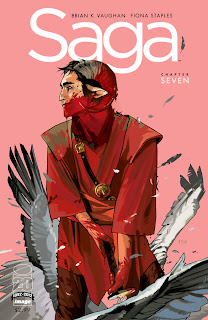 Saga #7 by Brian K. Vaughn and Fiona Staples continued this enjoyable series taking us into the next chapter of the adventure.

It seems that I got locked into different thought processes as I review and think about comics in general and one thing I have realized is that a good unlimited or very long form story needs to have a good premise and an idea of where it is going. At least an outline of the major story beats. As the writer gets into each chapter he has to make adjustments and it may shorten or lengthen his story. One of the great advantages of during creator owned work is you are not beholding to having to extend a story for reasons outside of what you feel the story demands or are forced to shorten something due to a publishing whim.

I have not been a big fan of Vaughn’s work before as I dropped off “Y the Last Man” and “Ex-Machina” but this book has a lot going for it. It is part Star Wars, part Romeo and Juliet and contains the epic story telling scope that makes it a true saga.


What Vaughn has done so well is set this up with a myriad number of elements and players and yet made the story eminently readable and easy to follow. Many writers get lost in their own story and as a reader following a 100 plus stories every month I often can’t maintain what the heck is going on with what and then fall off a book. Vaughn has made this relatable in two ways. First the child of this book’s Romeo and Juliet is the narrator of the story. So we know the story is set in the past and that the child survives to some uncertain time in the future. Second Marko and Alana (our Romeo and Juliet) are the central focus of the story and therefore it makes the book a character study first and foremost.

This issue is great as Alana gets to meet the in-laws who are none too happy about their son marrying into the enemy camp. We also have a flashback from this past to Marko’s early childhood to establish the relationships and then we move forward with the story line. Marko and his Mom go after the dead babysitter that Mom banished with Magic, while Alana and her father in law get to know each other. We also check in with other elements of the story to make sure we don’t lose track of the chase that is on to find the young couple. The art by Fiona Staples is outstanding as storytelling, page design; facial expressions and character designs are all very well done. A good graphic story can fail with inadequate art and now Staples seems to be the only artist I would want to see drawing the book. My one minor grip is the occasional shock scene for the sake of shock. This issue the giant Cyclops like creature is naked man with huge balls hanging down to the ground seems gratuitous and shocking for the sake of a cheap laugh. Still when you get down to it that is just a matter of my distaste for that type of element when it does not serve the story and in no way hinders what is a very good story.
Posted by Jim at Tuesday, November 20, 2012