Lee: This was a short month because of the holiday so Indies has been reduced to one day.  I am not sure I've ever only done Indies in one day for a full month.  Still lots of great stuff though.Thomm: Short month for comics. At work I end up with three paychecks for November because of the way the Fridays fall. Good timing for an extra pay in a month. 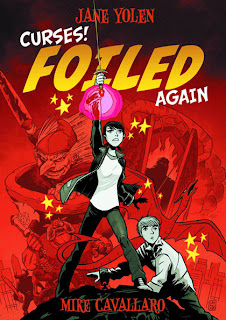 :01 First Second
Curses! Foiled Again GN by (W) Jane Yolen (A/C) Michael Cavallaro
Aliera Carstairs is back. This time she's got her cousin Caroline in tow, and the stakes are higher than ever. The realm of Seelie, the fairy kingdom of which Aliera is the hereditary defender, is under attack, and only Aliera and Caroline can set things right. Caroline, fragile and wheelchair-bound, may seem like more of a liability than an asset, but Aliera knows there's more to her quiet cousin than meets the eye. 176 pgs, 6x8.5 , PC, $15.99  Visit the artist here.
Lee: I've always loved Cavallaro's art and :01 First Second has been releasing great all ages books for a long time now.  This is well worth checking out.
Thomm: I know nothing about this book but it has a good premise. Besides, the title is too amusing.

7 more below the break with a strong mix of old and new. 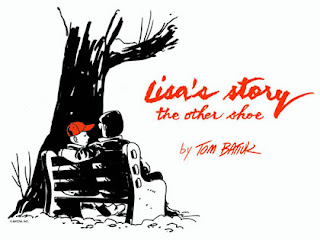 Black Squirrel Books
Lisa's Story: Other Shoe SC by (W/A/C) Tom Batiuk
Originally a gag-a-day comic strip that portrayed life in high school, Funky Winkerbean has evolved into a mature series of real-life stories examining such social issues as teen dating abuse, teen pregnancy, teen suicide, violence in schools, the war in the Middle East, alcoholism, divorce, and cancer. In 1999, Lisa Moore, one of Funky's friends and a main character, discovered she had breast cancer. After a mastectomy and chemotherapy, Lisa was cancer free. Then, in the spring of 2006, the cancer returned and metastasized. Lisa's Story: The Other Shoe is a collection of both the 1999 comic strips on Lisa's initial battle with cancer and the current series examining her struggle with the disease and its outcome. 252 pgs, 10x7, PC, HC $27.95, SC $18.95
Lee: Not a huge fan of the modern Funky but this was a really good series. It’s depressing which is to be expected. But it’s well executed and worth a read.
Thomm: I can’t imagine reading this because my experience of Funky Winkerbean in the last decade has been limited to The Comics Curmudgeon and Chris’ Invincible Super Blog just ripping the strip for its depressing world and generally unlikable cast of smarmy characters. On top of that, the widower of Lisa wrote a very successful book within the strip called Lisa’s Story. A little too meta for me that this is using the same name. 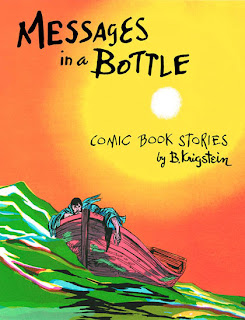 Fantagraphics Books
Messages in A Bottle: Comic Stories Krigstein SC
The stunning work of pioneering twentieth century comics artist Bernard Krigstein spanned many genres including western, true crime, horror and historical fiction, all rendered with a technical virtuosity and emotional depth new to the nascent comics medium. Messages In A Bottle presents 41 Krigstein stories created for a variety of publishers, including the legendary EC (for which he did his most extraordinary work, including the all-time great Master Race). Extensive notation and original art reproductions round out this compelling volume. 272 pgs, 8 x 10.45 , FC, $35.00
Lee: One of the greatest Golden Age artists, this is not to be missed if you like classic material. Krigstein was one of the artists who really pushed the medium before leaving for more lucrative marketing jobs.  Nice oversized format will really show the art off.
Thomm: Definitely beautiful. I can’t speak to the quality of the stories told, but Master Race sounds like a good one, at the least. 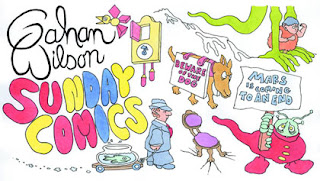 Gahan Wilson: Sunday Comics HC
Gahan Wilson Sunday Comics collects, for the first time, each and every one of Wilson's little-known syndicated strips that appeared in America's newspapers between 1974 and 1976. Featuring his usual cast of freaks, geeks, and weirdoes, Wilson deftly exploits the minimalist Sunday strip form to skewer the everyday horrors of being human. 184 pgs, 12 x 6, FC, $26.99
Lee: Before Far Side there was Gahan Wilson.  He is a modern day Addams.
Thomm: Good works but a little pricey for me. 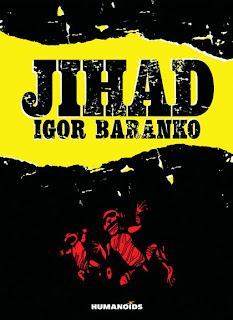 Humanoids Inc
Jihad HC by (W/A/C) Igor Baranko
In the year 1206, Genghis Khan and his Golden Horde dominated an immense territory from the Pacific Ocean to the Caspian Sea with only 150,000 men. In the year 2040, the latest Russian dictator has a unique vision: to invoke the spirit of Genghis Khan and his Golden Horde to create an empire reaching from the Pacific Ocean to the Atlantic. To do this, his secret service must find the corpse of the latest reincarnation of Genghis Khan. 144 pgs, 8x11, FC, $29.95 See artist here.  There's very little Russian but a ton of art samples.
Lee: I love the concept because it sounds interesting.  But I am blown away by the art.  As I always say, if Humanoids puts it in HC you can't go wrong.  This is an easy buy for me.
Thomm: A bit befuddled by the concept. The title draws on Islam but the concept is about reincarnation, a philosophy more comfortably found in Buddhist and Hindu teaching. More befuddling still, Russia is predominantly Eastern Orthodox Christian, and not likely to change from that in 28 years. 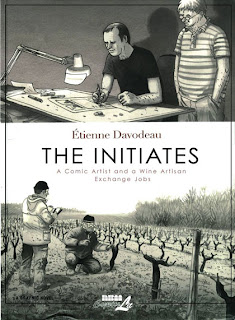 NBM
Initiates by (w/a/c) Etienne Davodeau
Etienne Davodeau is a comic artist. He doesn't know much about the world of wine-making. Richard Leroy is a wine-maker. He's rarely even read comics. But these two are full of good will and curiosity. Why do we choose to spend one's life writing and creating comics or producing wine? For more than a year, Etienne went to work in Richard's vineyards and cellar. Richard, in return, leapt into the world of comics. They opened a lot of bottles and read many comics. They traveled around, meeting authors and wine-makers sharing their passion for their jobs. The Initiates explores the nature of a man's vocation with a true life representation of it from two very different perspectives. 272 pgs, B-W, 8x11, $29.99
Lee: I love this! I can learn how to make wine and comics at the same time.  This is one of those books in which the hype really sells it.
Thomm: Unique is the best description of this project. Intriguing is a close second. Well worth a look. 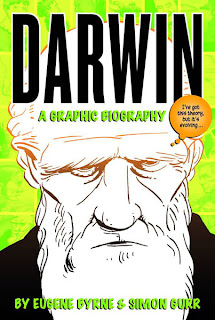 Smithsonian Books
Darwin: A Graphic Biography GN by (w) Eugene Byrne (a/c) Simon Gurr
Presenting Charles Darwin's life in a smart and entertaining graphic novel, Darwin: A Graphic Biography attempts to not only educate the reader about Darwin but also the scientific world of the 1800s. The graphic medium is ideal for recreating a very specific time frame, succeeding in placing the reader right next to a young Darwin on a beetling expedition. With specimens in both hands, and anxious to get another, Darwin ends up stuffing the third beetle into his mouth. The ups, downs, and near-misses of Darwin's youth are portrayed honestly. Darwin wasn't somehow predestined to greatness. He was curious, patient, and meticulous. He persevered. NOTE: Not available in the UK, Australia, Singapore or the Philippines. 104 pgs, 6x9, B-W, $9.95
Lee: The monthly slice of making us all smarter!
Thomm: This is the publishing arm of the Smithsonian Institution, which is run by the US government. I’m surprised the right wing nuts in the House have allowed the publication of anything that might suggest something other than the Bible is the only authority for how the world operates. How’d they not set up a Hyde Amendment for science when they were running the show during 2001-2007? I’m even more curious about the list of countries where the book isn’t available. Will I get arrested if I bring it to one of those? 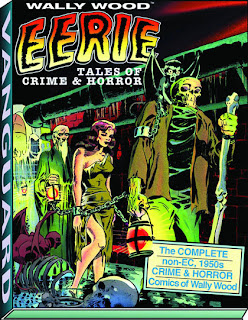 Lee:  For my dollar I have to say the best books are the Krigstein collection and Jihad from Humanoids.  They are too arty for me to pass up.
Thomm: Initiates and Darwin have my vote for best bets of the month. Real slice of life, up close and intimate, in both books. Works for me.
Posted by Lee at Wednesday, November 28, 2012