Where's a Halloween loving person to go for a scary cover?  Why, Marvel's Man-Thing of course!

I'll skip over the 70's version and skip right to the late 90's series written by J.M. DeMatteis, and art by Liam Sharp.  DeMatteis did a good job of trying to control his desire to over write and the series was pretty good, if short lived.  But, the best part was the art.  Liam Sharp drew one of the creepiest, and most frightening Man-Things ever.  You can find these in the quarter bin and it's well worth it, even if you just look at the pictures. 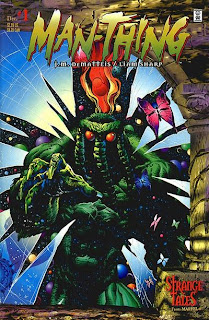 Man-Thing #1, December 1997
Pencils: Liam Sharp
Inks: Liam Sharp
This gives you a feel for what you're in store for.  You can see that Sharp is trying to make the Man-Thing his own. 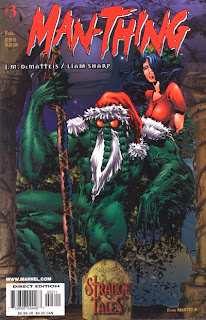 Man-Thing #3,  February 1998
Pencils: Liam Sharp
Inks: Liam Sharp
And you have to love Christmas stories.  This is hilarious. 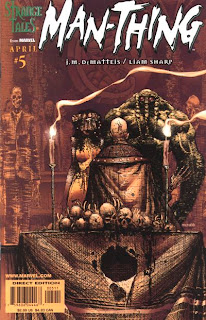 Man-Thing #5, April 1998
Pencils: McNabb
Inks: McNabb
This is just really cool and really different.  This was during a period when Marvel was willing to try new covers. 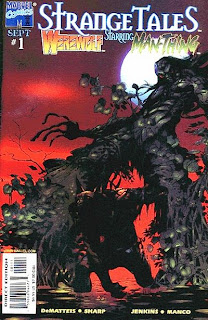 Strange Tales #1, September 1998
Pencils: Arthur Suydam
Inks: Arthur Suydam
How con you not love Art Suydam?  This is fantastic.  The Man-Thing hidden in the trees, if not the trees themselves and some wolf-dog thing sulking around. 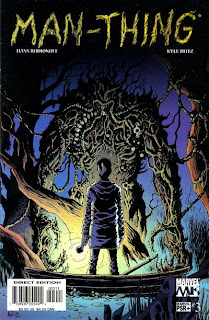 Man-Thing #3, 2004
Pencils: Kyle Hotz
Inks: Kyle Hotz
Ok, after the collapse of the previous Man-Thing series he went on hiatus for a couple of years.  Then he returned with art by one of the great horror artists of the last decade, Kyle Hotz.  The picture doesn't do the image justice!  The story was rotten but Hotz art inside is absolutely fantastic.  Cam out the little skull in the Man-Things body?

Anyway, that's all for now.  Go out and enjoy yourself.