There were so many good comics that came out this week (Batman was stupendous) and my list just keeps getting bigger and bigger lately (not a good thing).  It’s ridiculous -- I’m probably now buying as many books a month that Jim does in a week! Marvel Now! is certainly partly to blame (just like the New 52 was last year).  You just want to get in on the ground floor of the next big thing and even if it doesn’t float your boat, you can always resell it on ebay!  (The Scottie Young “babies” variants have been very eye-catching too.) I’m also a long time Marvel fan, so despite the fact that “my” continuity universe probably died sometime after Heroes Return, I love the characters and want to be excited about reading them again.

Other than the disappointing Point One issue, this was the first week that I really got any of the new titles: Fantastic Four, Thor God of Asgard, and All-New X-men.  Thanks to an unusually calm Wednesday afternoon, I actually got to read them right away (and two of them out loud to my son, so I didn’t rush the experience).  What was the verdict? Read on…

(WARNING there will be SPOILERS) 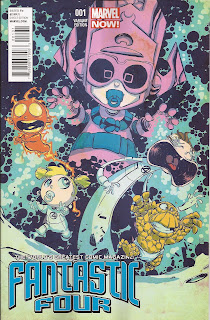 Matt Fraction is doing a terrific job on Hawkeye right now and Mark Bagley’s list of accomplishments is too long to mention.  Unfortunately, this first issue did not excite me too much (it was decent).  I really liked Mark’s Amazing Spider-Man and Thunderbolts work, but Trinity, Justice League of America, and now this all seemed rushed, almost incomplete at times.  The characterizations are okay, but they really seem to be caricatures of their former selves (i.e. The Byrne era).  Johnny’s the juvenile, Sue’s the mother-hen, the Thing is just sulky, and Mister Fantastic is always lying about something.   Those are all elements of their personalities for sure, but something is off somehow.  I used to love these characters, but now I don’t really care about them anymore.  I especially hate the Fox movie Johnny Storm portrayal.  He should not act like a kid!

The story itself does have some interesting plot elements.  The Fantastic Four are in the past when Reed’s arm is severely damaged by a dinosaur bite.  He’s elastic; he doesn’t ever get hurt that way.  It turns out he’s “breaking apart at a molecular level” and it may soon affect the others. There’s also no cure in all the known universes, but what about the unknown ones?  So, he converts Johnny’s Negative Zone warship into a hybrid Jupiter 2 Tardis.  Jupiter 2 in that it is taking the whole family on a space adventure, and Tardis because it can go thru time and space.  The idea is that they’ll just spend a year away and pop back in right after they left (like that ever works).  For some unexplained reason, Reed chooses not to tell anyone the truth about why they’re really going on the trip.  Why on earth not?  And as the first page revealed, thanks to Franklin’s prophetic dream, there’s going to be problems at years end.

So, there are lots of places this storyline could go...“strange new worlds” and the like.  Being off the regular MU grid will allow Fraction to really put the family thru the paces.  The Byrne negative zone storyline was one of my favorites, so this seems reminiscent of that one. I think I’ll come back for at least issue 2, but I really think the FF title is going to be the real hit in a quirky sort of way.  We’ll find out in two weeks if I’m right.   The upside is that while firmly connected to the Hickman era books, you could easily jump right in and start reading, which is exactly the whole intent of NOW! 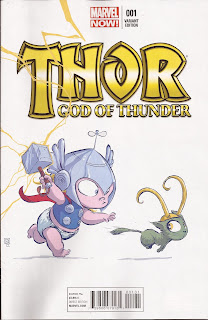 I put this on my list sight unseen at Shawn’s recommendation and I definitely liked it better than Fantastic Four.  The art is simply gorgeous with every panel looking like a painted masterpiece.  Aaron’s story has a really nice organizational structure with three different versions of Thor depicted: past, present, and future all woven together with this intriguing god killer storyline.  The raucous noisy beginning and the lonely quiet ending (before the battle) were nice opposite bookends.  It really reminded me of a Conan tale in some ways.  I really liked Thor’s narration too.  But it’s definitely not just a “talk over” book; there is plenty of dialogue enhanced by terrific facial expressions and body language.

What troubles me is the future storyline.  Thor is sitting on his father’s throne the last of all gods looking like his father Odin fighting off a horde of the god killer’s minions.  It’s a great scene, but I just feel that this reality is going to have to be wiped clean eventually, so there isn’t any suspense to it.  I guess it’ll primarily be a character study in the different situations.  I skipped Aaron’s Incredible Hulk and couldn’t read his foul-mouthed, but highly praised Scalped, so this is my first real exposure to his work and I think this one is a keeper. 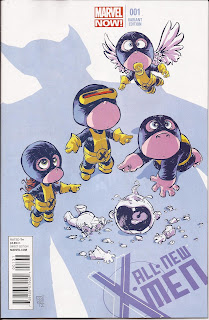 I LOVED this book!  The opening was great with the Beast starting to undergo another painful mutation, one that he feels he may not survive.  His prayer was wonderful.  I really liked the new mutant sequence and it really caught the vibe of Giant Size X-Men #1.  While I hate to see Cyclops as a jerk and totally on Magneto’s side, it wasn’t difficult to accept either and the ideological differences between his group and Storm’s were quickly grasped.  Scott is hurting humans in his attempt to save the new emerging mutants and consequently creating more animosity toward them, which is going to cause big problems for the Westchester group.

Storm fears it will lead to a mutant civil war (none of us want to go thru Civil War again).  Bobby mentions that the original X-Men would’ve hated seeing this situation, which gives Hank an idea.  We next shift to the past (issue #8 page 5 panel 7 or page 184 in the X-Men Omnibus volume 1 right before they encounter Unus for the first time) where Bobby and Hank have just been attacked by a mob.  As Hank starts to storm out, he encounters the present-day Beast who asks them to come to the future and straighten Cyclops out.  The timing is great, because Professor X is underground searching for Lucifer (not the real one).  We don’t get an explanation on how the Beast went to the past, but the new mutant Eva has time stopping abilities, so it’ll be interesting when they eventually meet.  I’m also looking forward to the out-of-time/culture shock that the “old” X-Men will sure to experience.

The story is great and I didn’t get the sense that the characters were all talking with a single voice either.  The art is fantastic (as you’d expect from Stuart), especially the panel layouts, usually over two-pages. If it wasn’t for Batman, this would have been my best book of the week.  I don’t think I’ve regularly purchased an X-Men title in 19 years!  Just please, please keep the story self-contained in this one title…pretty please.

Well, I ran a little longer than I had anticipated (it would’ve gone faster if I had written this Wednesday night).  But I guess it’s just as well, since I’m taking next weekend off.  November 21st is my 20th wedding anniversary and then we have the long Thanksgiving holiday weekend here in the States. So, see you all in two weeks, Lord willing.
Posted by Matthew at Saturday, November 17, 2012

Email ThisBlogThis!Share to TwitterShare to FacebookShare to Pinterest
Labels: Mini-Reviews