Hoo-rah!  Dracula makes an appearance in Scott Snyder's excellent Vertigo series.  Ok, not exactly an appearance.  We never do see him in the series.  But his malevolent presence sure is felt. 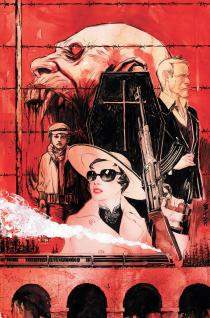 Another in the series telling more about the Vassals of the Morning Star and Felicia Book, this miniseries is certainly as good as its predecessor, Survival of the Fittest.  Actually, I'd say it's better.

Felicia now lives in Paris with Gus, her adopted son who she has cured of vampirism with an experimental serum.  Agent Hobbes, quite possibly the most aptly named fictional character ever, is sitting at an outdoor cafe in London, 1954 when a damnably perky American, sweater tied around his shoulders and all, plops down at his table.  Tommy Glass is the possessed agent of Dracula, who's been prisoner of the VMS in one of the pillars of a London bridge for over 50 years.  As he's talking to Hobbes vampires are breaking out Dracula, or more specifically, the coffin containing Dracula where he's been held and deprived of blood all that time.

Hobbes manages to escape the carngage at the bridge and reach Paris to enlist Felicia's help.  The vampires are supposed to have reached a deal with the Soviets for the coffin to be taken to Moscow but the double cross is on.  The vampires instead take the coffin themselves.  Felicia and Hobbes, with Gus in tow, wind up allied with a vampires who are of a different species than Dracula's minions.

In fact, there's a lot of new information as well as a great story here.  We learn Hobbes' history and how the Carpathian breed of vampire came to be, Dracula being their sire.  Turns out Gus wasn't cured by the serum, either.  It just surpressed his vampirism.  Dracula being out in the world and having the ability to control all Carpathians caused Gus to try to kill Hobbes at one point, but for the most part he's free of Dracula's influence.

I love the wide catalog of vampires that Snyder's created in this and the main American Vampire series.  There's a lot of new ideas he's brought to the vampire genre, and fortunately none of them involved sparkling skin and fetid romance stories.  Although, if anyone could make that genre of vampire story interesting, I'd bet on Snyder.  By the end of the miniseries Felicia is back in the VMS fold.  Looks like Gus will soon be one of their top agents, too. 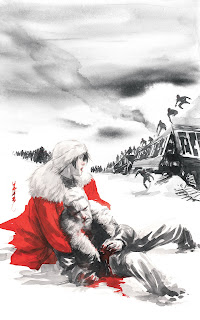 I only had two quibbles with the story.  The one I can explain myself.  The story lays out that Dracula can control any Carpathian, but he controls Gus at one point.  Gus was injected with vampire blood when he was in utero, but that blood was American Vampire blood, not Carpathian.  I presume that because the Carpathian's were the original source of the American breed there's enough of the Carpathian in Gus that Dracula could weild some incomplete influence.

More puzzling was Gus's age.  Hobbes says right in the first issue that it's been 15 years since Felicia took Gus from the VMS.  That was my calculation, too, because Survival of the Fittest took place in 1939.  That would mean that Gus is a minimum of 15 years old, more likely 16 or 17 because he wasn't an infant in 1939.  Despite that he's portrayed as an elementary age kid, at most 10 years old, and more likely 8.  Now, maybe his aging is somehow retarted by his vampirism, but it's never stated in the course of the story.  Hopefully the next installment will explain it.  Maybe we'll have a young man Gus in swinging 1960s San Francisco or something.  Whatever it is, I'll be anticipating it.
Posted by Thomm at Wednesday, January 16, 2013