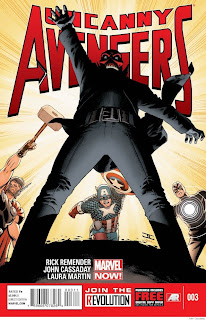 Marvel’s flagship title of Marvel Now, Uncanny Avengers finally got out issue #3 by Rick Remender and John Cassaday. John Cassaday is one heck of a super hero artist and I know that it must be like ripping plating off an armored car for him to turn in pages. I’m guessing he is a perfectionist and that the money he has made allows him to not worry if an editor is screaming at him. This book is showcasing some of his best work in a long time and I think it is only second to his work on Planetary. Of course no one touches Warren Ellis’ ability to write to his artist. Almost every artist who works with Ellis does his best work because Ellis knows how to structure his work to take advantage at what an artist does best. Even more importantly Ellis apparently has an eye for being able to evaluate what each artist does best. For your flagship title you would be hard pressed to have a better artist doing the first arc.

The story itself is darn strange and the entire thing seems to be just setting up what I think will be a long form story with various arcs built in. Remender has cast the Red Skull as the main villain and in order to make him powerful enough he had the Red Skull steal Professor X’s brain. The Red Skull now has the mental powers of Professor X. It is only something that comic book readers could read and accept as anyone outside of comics would just laugh at how the premise is flat out ludicrous.

Remender is also slowly building up this team. This issue we get to see Havok take the lead and start to order everyone around and the action is full throttle. Plenty of great action scenes, a great bit with Thor killing Wolverine (death is so meaningless in comics the game with a death scene is how will the character come back, not “are they dead?”). Finally we have the buildup of making the Red Skull a worthy foe for this powerful of a group.

With all of that praise I will have to say that the narrative flow of the book was exceedingly odd. The action is taking place and we have an almost narrator type voice talking but it is the characters thoughts. It created a strange read and almost stilted at times. Since the Red Skull is trying to infiltrate the minds of the characters I think it worked. It was not perfect but within the context of the story it set things up very well.
The best bit may have been the Red Skull realizing that he cannot bring about a new Reich by force and oppression, but that it needs to be the idea of the people to place him in power. Remender’s Red Skull is nothing if not at least philosophical.

The letters page says the next issue if the climax of the Red Shadow, but I still feel like with most of Remender’s work the opening gambit sets the stage for what will be the main story and the story will play out over 2 to three years.