The week begins with the three part of Death of the Family that came out from DC.  DC is a bitter disappointment to me of late. I truly loved the DC universe and characters and I would dearly want that love to be returned. Instead I feel like I’m a drug addict who can’t kick a habit even when I know it is bad for me.

Oh crap, I’m getting ahead of myself, jumping straight into the deep end. First I need to provide you with links to next week’s book with the Cosmic Comix’s link and the Midtown Comics link. The former is my store that I do mail order with since I have moved. I love their site and like a quick look at the list. I also use Midtown comics’ list to check on a title that I’m unfamiliar with as I can see all the solicitation details which often causes me to add a book or drop a book based on the actual contents. Next week includes Mind Mgmt, Stumptown, Battlefields, a new book Answer, Deadpool Killustrated (I just have to read this), Uncanny Avengers, BW Minutemen and Wonder Woman. It looks to be a great week. 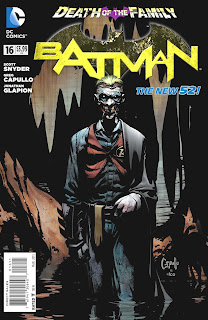 Okay back to the books, Batman #16 by Scott Snyder, Greg Capullo and Jonathan Glapion was good. I think that Scott Snyder is DC’s best writer and I love most of his work. His run on Batman has certainly been epic but somehow it keeps falling a little bit short. To be fair I expect nothing less than excellence from Scott’s work so I have the bar set very high. In Detective I thought Scott had a few missteps when he started his run but by the end of the story line “The Black Mirror” was one of the best Batman story done in decades. It rivaled the work of O’Neil and Adams. Scott’s Batman has been good but I feel it has not hit the high water mark yet. Don’t get me wrong this is the best cape and cowl book coming out of the new DCU but I still have some issues. The Court of Owls book went too far by having a heretofore unknown brother of Bruce be the Court of Owls main assassin. True they pulled back from that idea, but it was left hanging as a remote possibility. Also in the Court of Owls Batman ended up fighting in an Iron Man type armor. Granted given what was going on it almost felt needed, but that was not my version of Batman. It felt more like the old fifties and sixties style Batman where he is closer to being a true super human as opposed to a heroic man.

This particular issue just felt a little strange. I have enjoyed the core book of “Death of the Family” as the Joker has felt more malevolent and scarier than ever.  I think the revelation that the Joker actually loves Batman and is trying to free him from his family is a great concept. I have enjoyed ever single issue and even the tease that the Joker knows everything. Capullo’s artwork has been great and Glapion inks are taking his art to an even higher level. I can only imagine the prices these pages are selling for at this time. The problem is that the story seems to go too far. Batman enters Arkham and a bunch of guards are prisoners dressed as Batman and the Joker dancing. I know the Joker is insane, but this was just weird to the nth degree. The whole battle to get to the Joker was well played, but the Joker had such an elaborate death trap and so many things he had prearranged that it would appear he had the money and resources of a Bruce Wayne. The Joker’s planning and strategic thinking is off the charts. The throne room at the end was odd and not scary. The Joker’s use of other Bat villains was interesting but it felt like it just went a little too far. At the end of the day I believe that this part of the story will serve better in a collected format and I believe this story stands better on its own. The ancillary chapters just add to the unbelievable nature of how is the Joker able to do all the things he is being credited with doing. Comic books live on the suspension of disbelief and if the spell is broken it hurts the entire structure of the story. DC is trying to play off Scott’s work so much that instead of the Joker feeling cold, mad and cunning, he comes off as having resources and plots that would make Lex Luthor jealous.

Again there were great bits in the book, including Batman punching a horse, his fight on the stairs, Batman being killed in an electric chair, the cliff hanger with the serving dish and more terrific scenes. I would rather read a Scott Snyder Batman that I can quibble about then almost any other DCU book. I can’t wait to see how it concludes and I hope DC does a collection with just the Batman stuff. 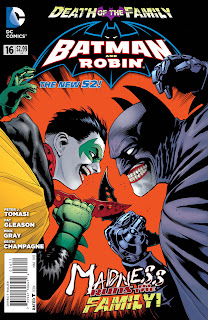 Next up is Batman and Robin #16 by Peter Tomasi, Patrick Gleason with Mick Gray and Keith Champagne as inkers. I know many book no longer have inkers and that with the advent of digital technology there are myriad ways that art is produced, but I still think the best work is the summation of great pencils and inks. This book, as does Batman, has great art. I also love the relationship building that Tomasi is doing with Damian and Bruce. Even though this issue we never see Bruce, Damian’s love for his father is real. The only problem I have with this story is Damian’s battle with the Joker when taken in its totality (i.e. with all the other tie-ins) makes the Joker seem almost omnipresent. Still this is a very good series and one I look forward to each and every month. 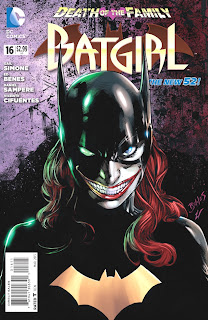 Last and least is Batgirl #16 by Gail Simone, Ed Benes and Daniel Sampere. We can talk about the art first. It is split between two artists and their styles are not that compatible. In fact with Jim Lee being the DC co-publisher and de facto art director too many DC books feel like the Image art work of old. Next the story is weak and Batgirl is portrayed as alternatively weak and overmatched and then vicious. The rationale for her actions is there, but it just never rings true for me. Of course the Joker being everywhere and doing everything continues to creep into my mind as I read this book and takes me out of the story. The biggest crime was to place an age on Barbara; apparently she is 20 or 21 years old. That means she was running around as Batgirl at 15 or 16, shoot at 17 and now back at 20 or 21. The de-aging of the DC characters means the history of these characters can’t exist. No relationship with Dick Grayson that has any gravitas, no Oracle, no nothing. She is an inexperienced heroine that is paper thin. Glad this is my last issue of this book.