Trying to Figure Out the Marvel NOW! Reading Chronology 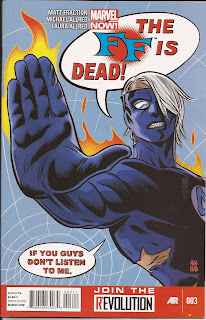 I don’t think I’ve purchased this many current Marvel titles in decades!  And since the NOW jumping on point, I can definitely sense the broader coherent universe.  Of course I realize that Marvel has been having their books tie into events for years now, but the neat thing is that there is no real big event (yet) as the glue – just a lot of titles that read really well by themselves but are obviously connected together.  But how exactly or more appropriately when?  It certainly has nothing to do with the shipping schedule! So come along with me on my journey down the logic train as I try to fit (everything I’ve read) together in sequence.  It will be an abridged study (not all books and I’m not touching all of those future Hickman-ish preview images) and some of my conclusions could be way off base, but I think it’ll be fun – mainly because one of the major determining factors I’ll be basing my assumptions on are appearance changes.

First, let’s take a look at the shipping schedule of the source books I’ll be referencing.  In order of appearance, using the big-endian shipping date (yyyy-MM-dd) I’ll list when the titles premiered (or switched over) and what was the latest issue number:

Okay, now let’s look at the relationships. There are some very definitive logical sequences (“<” means “before”). Last summer’s Avengers versus X-men (A vs. X) series was the prelude to Marvel NOW and the incarceration of Scott Summers and the funeral of Professor X seems to mark the beginning (a).  New Avengers has to predate the Fantastic Four/FF storyline, because Reed is still in the universe and he doesn’t look sick yet and it also predates Avengers because there is a flashback of the Illuminati (m < d + g + k < h). Iron Man has his black and gold armor in Avengers, but not his newest armor (b < h < s).  I believe Hulk probably joins SHIELD prior to his involvement with the Avengers (f < h).  The Beast is his old seemingly healthy self when he encounters the Superior Spider-Man, so Potto® shows up before the young X-Men arrive (i + j + o < c).  Storm gets her Mohawk after telling Jean Grey she’s now the original X-Men leader (u < q).  Punk Rock Storm shows up in X-Force (q < r).  The Superior Spider-Man could be in the Avengers team formed by Cap (o < h). The Jason Aaron Thor storyline is a bit of a floater, and Cap’s Dimension Z could be too; however, Rick Remender said in the letter page of issue #003 that “this is the story that sets [him] on the path into the Marvel Now, and believe me, Steve’s not going to come out without a few scars.”  I take what he says literally, so I think it could occur before Uncanny Avengers.

That was certainly a jumble, wasn’t it?  Finally, we’ll get to the possible reading chronology based on title or arc:

Some of the later ones are a bit of a toss-up, I know, but that’s the best I can do with what has come out so far.  Have a different theory?  Feel free to provide your evidence in the comments!  Boy that was harder than I thought, but at least I can stop thinking about it NOW (pun intended).
Posted by Matthew at Saturday, January 26, 2013