The Christmas/New Year's Holiday is officially over.  Yahooo... now back to the grind.  There was one Christmas book that I wanted to high light in the previous 2 weeks but... well I just couldn't.  As I've gotten older, I found that I really like Christmas and the traditional nature of it.  But, since it's a new year I can talk about it now!  It was a one shot associated with The Main Man, Lobo.  And, as I looked at the covers, I remembered just how good this series was. 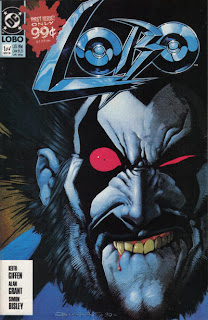 This is the issue that started it all.  Notice the 99 cent introductory price too!  Over the top violence as only Bisley could illustrate.  Believe it or not, the story still holds up today.


It only gets better, and more offensive, below the break. 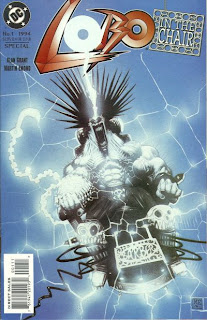 As everyone knows, Biz eventually got kicked off of the Lobo series.  And the franchise got run into the ground as the publishers are apt to do.  But what people don't know is that some of the artists who followed Biz were just as good.  Martin Emond was one such artist.  He was amazing and sadly lost long before his time.  This is worth searching for. 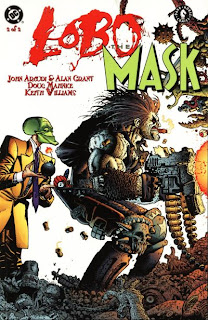 By this point in time the franchise was in series decline but it had one last great gasp in it.  Mahnke produced some stellar over rendered art that perfectly captured the insanity of Arcudi and Grant's story.  It's all about the violence and blowing things up in this series.  And it was great! 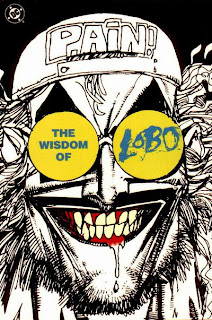 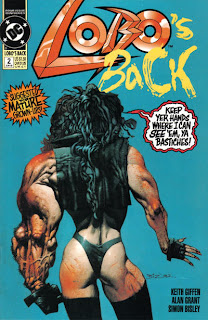 And this is why Biz got fired.  The infamous "phallic muscle" cover.
Apparently it was on issue #1 too, but not nearly as bad.

And I also learned, for even more phallic cover fun, Lobo would direct you to the knife wielding psycho on the cover to Uncanny X-Men #260 from Marvel Comics (this works even better if you cover the bottom 1/8th of that cover with a stray backing board).

I leave you to go find it yourself. 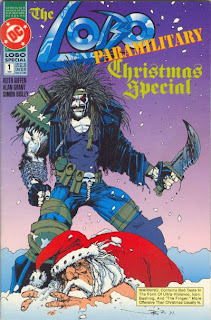 Although I remember laughing my @$$ when this came out, I can see why people were upset about it.  These days it seems tame but at the time it really caused a stir.


Anyway, that's all for this week.  Next week, something less controversial.
Posted by Lee at Sunday, January 06, 2013