The big two are always looking for new and "innovative" ways to get girls back into comics.  In the late 90's, Peter Bagge, of Hate! fame, wanted to write a comic that would appeal to his young daughter.  He roped Gilbert Hernandez, of Love and Rockets fame together they created Yeah!

All covers are pencils/inks by: Gilbert Hernandez 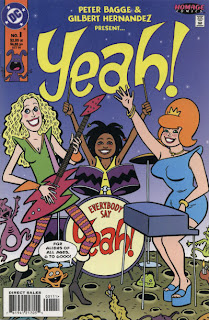 Yeah #1, October 1999
The premise was simple enough, a girl rock band is super popular in outer space, not so much on their home planet Earth.  Think Josie and the Pussycats... with a little edge.  As much as Bagge tried to tame it down, it's more tween... late tween... than anything else.

See the rest below the break 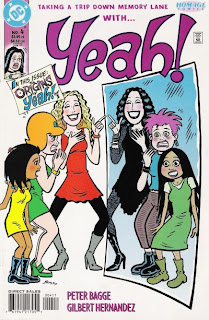 Yeah #4, January 2000
Hernandez does a great job of creating really striking covers.  I love the image of the girls then and now. 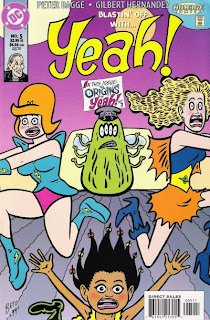 Yeah #5, February 2000
I've always wondered if this was really the first appearance of Doop. 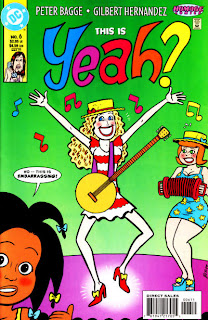 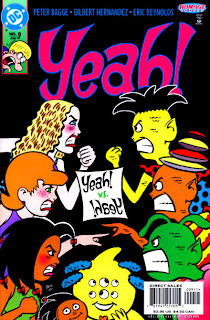 Yeah #9, June 2000
Finally, what is a comic book cover without a homage at some point to superheroes.  Sheesh!

Now then, did you notice that the character in the logo box changed every issue?


If you want to read the series, Fantagraphics collected it a couple of years ago in a fancy tpb.  Sadly they did it in b-w but it's still fun to read.