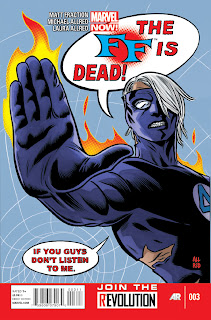 FF #3 by Matt Fraction and Mike Allred was just fantastic (unintended pun). Until just recently I was not a huge fan of Fraction, but between Hawkeye, Fantastic Four and FF he has won me over. The actual Fantastic Four book is a very Lee/Kirby type of space adventure right now. The Hawkeye book is an almost lyrical look at the life of a street level hero. The FF is insanity.

This issue Johnny Storm comes back in time to the surrogate FF that consists of Ant Man, She-Hulk, Medusa and Darla Deering (Ms. Thing).  This Johnny Storm is many years older, has white hair, is missing a leg and an eye. He tells the tale of how the rest of the crew was destroyed by Doctor Doom, Kang and Annihilus. Oddly there is no mention of what happened to Franklin or Valerie.

The group finds it hard to believe this odd character is who he says he is. They even bring in Wyatt Wingfoot to vouch that Johnny is who he says he is. It was a nice touch hearkening back o some very old continuity. At the end of the story Johnny wants to go after Doom today and Scott’s who daughter was killed by Doom is more than willing to sign up for the idea.

Now that is the base story, but Matt is also layering in plenty of other great stuff. We have the Moloids that secretly recruited the Mole Man to attack the new FF so the group would bond. We have Scott going after Darla to bring her back to the FF because the “Terrific Three” is a horrible name for the group. We have the Yancy Street gang attacking Darla as Scott is trying to woo her back into the fold. We have Scott telling the kids to go to bed and Alex Power stating he is 19 and not going to bed at 4:30PM.

Then you add in Mike Allred’s art and the story takes on a whole different quirky nature. I can never place what it is about Allred’s art that makes it so distinctive. His style is pure quirkyness. He is an excellent story teller; it is just the poses of the characters and everything else that is very jarring and different from standard super hero fare and the noir family of artists. Sometime I don’t like Allred’s art but matched with this story it is perfect. In fact I loved his work on IZombie where his style just enhanced the odd story being told.

The thing that makes it so great is not that it is just this over the top insane adventure, but Fraction is building up his cast fast and giving everyone some great character bits. In the span of three issues Matt has given us a good picture of the main cast and has thrown out some intriguing character bits regarding the Future Foundation kids.

This is a book that I picked up wondering why the hell was I getting this to now I’m saying I can’t wait to see what happens next.

Part 3 coming up around noon US East Coast Time.
Posted by Jim at Monday, January 28, 2013