Lee: Let’s be honest, the holidays sucked. So if my picks seem more bitchy than normal, now you know why.

Thomm: More bitchy than normal? Is that possible? I had a good time with the holidays. I got to use holidays ad nauseum to offend the Christian soldiers and Christmas to offend the officious. What’s not to like? You just tailor your greetings to offend as efficiently as possible. 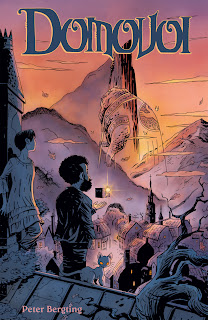 DOMOVOI TP
Peter Bergting (W/A/Cover)
FC, 136 pages, 7" x 10", $19.99
In the Old Town of Stockholm, where myths are alive and creatures of folklore haunt the night, an extraordinary young woman named Jennie is caught in the scheme of a cadre of villains who control the means to free the Domovoi—the lethally dangerous, poltergeist-like spirit of the entire city! Visit Peter’s site here with all sorts of art samples and what nots.
Lee: This sounds a lot like a Euro take on Fables, which is ok by me. I was trying to figure out who Bergting was and he did the final couple of issues of Rick Remender’s Strange Girl back a couple of years ago. I know he makes pretty pictures and can tell a sequential story so I am sold.
Thomm: Sounds great to me. My last Swedish read was The Girl with The Dragon Tattoo series, leaving me with a good feeling about the quality of Swedish writing translated to English. Funny how your take on Fables is American, though. I’ve always thought it had a European feel in the sense that the inhabitants of Fabletown were mostly from European fables.

Even though I was happy with the first book, I get bitter below.  See for yourself. 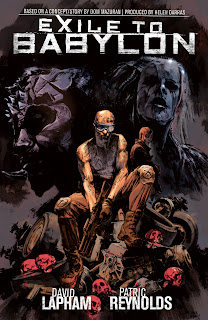 EXILE TO BABYLON TP
David Lapham (W), Patric Reynolds (A/Cover), and Matthew Southworth (A)
FC, 96 pages, 7” x 10”, $14.99
In 2040, a private military operative of reeducated gang members—the Blackshield Angels—are the only hope of liberating a vital fuel supply from a criminal overlord. Blackshield’s best agent struggles through betrayal, love, and a seemingly unending war zone—Zone 12—to complete his mission through a dangerous world where tattooed warlords reign supreme and giant satellites watch men from above like gods. Soon to be a major motion picture. Visit the artist here.
Lee: Is it me or does this just sound dumb? Maybe it isn’t but when I check on the movie’s actual status and it’s only pre-preduction… that’s not close to “soon” in my book. It’s really close to making sh*t up because you don’t know what to write about it. I’m passing which is too bad because Reynolds is an artist that I would like to see more of.
Thomm: I like Southworth’s work on Stumptown, but this promo sounds like a compilation of other people’s sci-fi ideas, ranging from Scout to District 9. 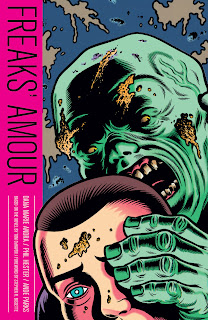 FREAKS’ AMOUR TP
Tom DeHaven (W), Dana Marie Andra (W), Gary Panter (W/A), Phil Hester (P), Ande Parks (I), and Charles Burns (Cover)
b&w, 176 pages, 7" x 10", $17.99
Based on Tom DeHaven’s acclaimed cult novel, one of comics’ most powerful horror stories returns! In DeHaven’s nightmarish America, the survivors of a nuclear blast—twisted by radiation and the contempt of the human population—try to raise money for surgeries any way they can. For brothers Grinner and Flour, that means everything from grotesque traveling sex shows for the normals to the ultimate drug—mutant goldfish eggs! This collection includes the complete series and the covers by Mike Mignola, Charles Burns, and James O’Barr, plus an original prose sequel by DeHaven, and Gary Panter’s adaptation.
Lee: I wanna say no to this soooo bad but I don’t think I can. I am a sucker for cult books and this looks like a doozy. If the reviews on Amazon are any indication, this is full of all sorts of messed up stuff. But “it’s an excellent commentary on how society treats marginalized people.” Being a comic book fan they had me at marginalized people.
Thomm: Harder to argue that comics fans are marginalized these days. Comics are keeping Hollywood afloat at this point. They had me at mutant sex shows, though. 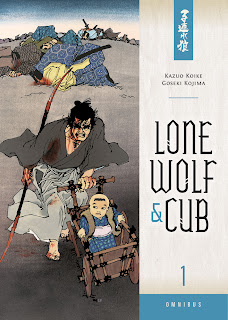 LONE WOLF AND CUB OMNIBUS VOLUME 1 TP
Kazuo Koike (W), Goseki Kojima (A), and Frank Miller (Cover)
b&w, 712 pages, 5" x 7", $19.99
A samurai epic of staggering proportions, the acclaimed Lone Wolf and Cub begins its second life at Dark Horse Manga with new, larger editions of over 700 pages, value priced. The brilliant storytelling of series creator Kazuo Koike and the groundbreaking cinematic visuals of Goseki Kojima create a graphic-fiction masterpiece of beauty, fury, and thematic power. Collects Lone Wolf and Cub volumes 1-2, and stories from volume 3.
Lee: The good news is DH stopped publishing these trades as 4x6 miniature books and up-sized them to manga books at least. The bad news, at 700+ pages this will last one, maybe two readings, before the whole thing comes apart. How about a fancy hc instead? I know I would like that more.
Thomm: Oh, I’m good with this format. A little care and tenderness in handling and this will last just fine. It’s a steal at $20 for over 700 pages. 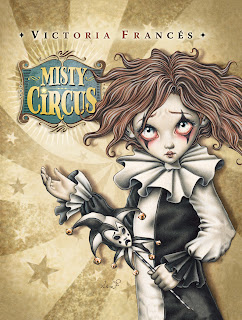 MISTY CIRCUS TP
Victoria Francés (W/A/Cover)
FC, 64 pages, 7” x 9”, $14.99
Renowned artist of the dark fantastic Victoria Francés first made a splash in the US with her dreamy, sensual paintings in the Favole trilogy. Now, Francés returns with a gorgeous storybook for all ages. The tale of little Parisian boy Sasha and his poignant misadventures is at once heartwarming and melancholy, combining a sweetly gothic story with arresting, beautifully painted illustrations. Visit the official page here. Lee: That’s a boy on the cover? Really? Ooookkkkaaayyyyy. Anywho, it looks like this is going to be a book full of beautiful pictures and maybe a story. Maybe not. I’m following Thomm and passing on this one.
Thomm: You really are in a bad mood if you’re passing on the pretty, androgynous pictures. Even if I could get past the skimpy story the pictures aren’t really my taste. 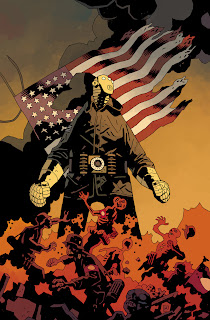 SLEDGEHAMMER 44 #1
Mike Mignola (W/Cover), John Arcudi (W), Jason Latour (A), and Dave Stewart (C)
FC, 32 pages, $3.50, Miniseries
August 1944: a man in a suit of iron armor drops from an American warplane onto a French battlefield, where he attempts to fight his way through an army of Nazis and the massive war machine they keep protected in an armory. Mike Mignola’s version of Iron Man!
Lee: Let’s just list what there is to love about this: (1) I love Latour’s art, (2) It’s the Hellboy team, and (3) as they said, it’s Mignola’s version of Iron Man. This is an easy buy.
Thomm: I’m right there with you. Mignola on Iron Man would be good. Mignola on his own version of Iron Man is great. Bringing along the merry crew from Hellboy only makes it better. 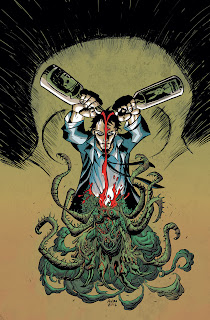 WILD ROVER FEATURING THE SACRIFICE
Michael Avon Oeming (W/A/Cover) and Victor Santos (A)
FC, 32 pages, $2.99, One-shot
Like his mother before him, Shane’s an alcoholic. But his family curse goes deeper than that—Shane needs to overcome the black magic at the heart of his addiction by killing a liquor demon if he hopes to reclaim his soul. New cover, 24 story pages, plus a fantasy short written by Oeming with art from Victor Santos!
Lee: This is another collection of material from DH Presents. Since I don’t read that book, I will leave it to Thomm to tell us if this is good enough to pick up the one shot.
Thomm: Ok, it’s not a good sign that I didn’t remember this one. Checking around on some net sources to try to jog my memory didn’t help, either. On the plus side, the sources I did check were all favorable. I like the art, too. With that topic you’d think I’d remember it, though.

Thomm: I thought the Lone Wolf omnibus was going to be my big take for the month, but Mignola’s version of Iron Man sailed right past it. Still, both of them are likely to be finding their way home with me.
Lee:  Maybe I'll borrow your Lone Wolf someday then.  I want it but I keep holding out for a larger format.