This week it seemed to scream for me to do a series of solo reviews of a bunch of books that I liked. Instead of starting with that portion of the program I thought I would hit a bunch of other books that I read. This is normally my wrap up post, but always good to shake things up on occasion. As with many weeks there are a lot of books that I will be reading later and I did not have a chance to include in the week in review. Monday will be 4 parts and Tuesday will be 5 parts.

Of course before we jump in we have to give you the CosmicComix list and the Midtown Comics listing. Some of the highlights are Invincible #100 (big spoiler at Bleeding Cool), Hawkeye, I Vampire, Batman Inc., and two Before Watchmen books. On one hand I’m sad to see Before Watchmen come to an end on another it is a nice reduction of my list.

Alright, now we can get back to the reviews. 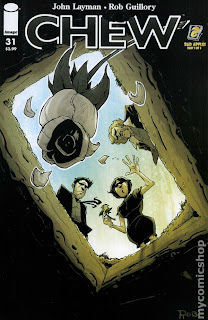 Chew #31 by John Layman and Rob Guillory is the official start of the second half of the story. This continues to be a terrific series. My guess is this book is too dense with all that has gone on before to generate new readers but I’m also guessing no one is jumping off this book. Hopefully via trades and such new readers can still catch up. This issue Tony is burying his sister who died last issue and he is now back on the job with the FDA. Layman gives us more background and sets up the new arc very nicely. Not my best book of the week, but definitively one of the best series on the stands.

Red Hood and the Outlaws #16 by Scott Lobdell, Timothy Green and Wayne Faucher. Not sure what the hell happened to Timothy Green as I used to love his art. The art feels very rushed and looks like crap. The story is a continuation of Teen Titans and I only got this book since it was a Death in the Family tie-in. I really need to stop doing that, missing this book would have been a blessing. This book is a piece of garbage and a waste of money. 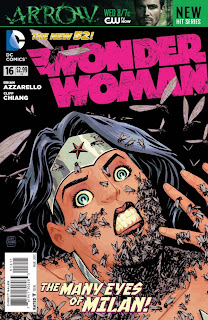 Wonder Woman #16 by Brian Azzarello and Cliff Chiang was great. I love this series. Azzarello has turned Wonder Woman into an interesting and fun read. Cliff as the main artist on the book turns in great artwork. One thing against the book is it is way too dense for anyone new to try and jump in. In this issue alone the cast of characters was Milan, Wonder Woman, Orion, huge savage guy in Antartica, Zoe, Hera, War, Strife and I’m not even mentioning everyone. Steeped in Greek mythological and being moved forward like Marvel used Norse mythological for the basis of Thor. The book is a great read and each issue builds on the prior work. Even if it is not reader friendly for the uninitiated, like Chew, it is worth the effort to come up to speed.

Justice League #16 by Geoff Johns and Ivan Reis was a decent issue. Of course the bar was set so low that it was not hard to get over it. Most of the league is defeated by Orm as the attack by Atlantis looms. Cyborg is calling in the reinforcements and it appears that the JL roster is about to get bigger and/or this is part of the set up of the new JLA book. I worry that JL is being used as a platform book trying to set up specific things for the DCU as opposed to just telling good stories about menaces that needs the group. Also it appears to me that Johns’ version of the DCU has no relationship to the rest of the DCU. There is no cohesion to the new DCU. Often it doesn’t need the cohesion but it is just another thing that is causing me to disconnect when reading the books. The Shazam back up by Johns and Frank is more interesting and a cool study of the new Billy Batson becoming Shazam. When the eight page back up is superior to the front of the book every month you know you have an issue. 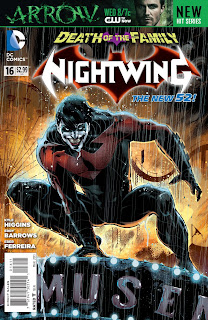 Nightwing #16 by Kyle Higgins, Eddy Barrows and Eber Ferreira was by some accounts a good issue. This story has been consistently built up well since issue #1. It is another Death of the Family tie-in and again the Joker sure is doing a lot to a lot of people.  For me the book is just not working. My feeling of being disconnected with the DCU is not as much of an issue when I don’t care about the character. It is also less of an issue when you do a hard reset of the character and I know there is nothing but the name left. DC tried to have their cake and eat it two with the Batman stuff and it has not worked as the changes are actually rampant but they are trying to pretend they are the same. Dick never led the Teen Titans, his last name was made up and he was supposed to be an assassin for the Owls. Even his stint as Batman feels like it is fast becoming vapor. I like this character and really enjoyed him becoming older and knowing himself. The disconnect hurts more because I had a connection. All in all I can understand that many fans feel this book is done well, but it is not working for me and is almost time to cancel this off my list. I read that Brett Booth maybe the artist soon, that should make the book less appealing.

Legion of Super Heroes #16 by Paul Levitz and Scott Kolins was an alright issue. I was getting back into the series as Giffen is coming aboard and wanted to make sure I had a handle on who was who again. Levitz had chased me off my favorite franchise, which was odd because he was my favorite writer of the series in years past. Now I read Giffen is off the book after two issues. The chaos that is DC is killing me. Not sure what I’m going to do about staying on this book or not.

Deadpool Killustrated #1 (of 4) by Cullen Bunn, Mattoe Lolli and Sean Parsons is just pure mad fun. It is Unwritten with Deadpool as the star. It is metatextual fun with much killing and mayhem. It is a follow up to Deadpool Kills the Marvel Universe and just out and out stupid fun. 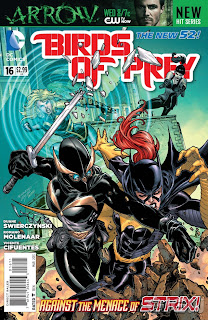 Birds of Prey #16 by Duane Swierrczynski, Romano Molenaar and Vicente Cifuentes is a decent read. The problems I have are Duane is leaving, I never quite got the mission of the group, we have the mystery of Starling being undercover for Waller and now Canary’s powers going out of whack. I was slowly feeling like this book might be okay but now the DC chaos effect has hit this title also and I’m not sure if I want to stay.

Green Lantern #16 by Geoff Johns, Doug Mahnke and a host of inkers was a good book. I enjoyed B’dg (how the flock do you pronounce that) coming in and giving Baz a quick course in how to be a Green Lantern. I also enjoyed that Baz decided to try to heal his brother-in-law with his ring. It is not suppose to work and it did. It showed Baz may have more to him then we thought. The issue even gave us a good reason why Baz is carrying a gun. Of course with the liberal hue and cry over gun control I see DC dropping that bit very soon. We also get a quick peek of Sinestro and Hal hanging out in the afterlife. With Baz as the lead character this book has gotten interesting again which proves the point to me that new blood is needed under the mask, not a new universe.

Green Lantern Corps #16 by Peter Tomasi, Fernando Pasarin and Scott Hanna was almost a continuation from GL #16 and also picked up from the last issue of this book. Baz and B’dg go save Guy Gardner from the Third Army. It is a great slam bang action issue that leads into the GL Corps Annual next week.

Fables #125 by Bill Willingham, Mark Buckingham and Steve Leialoha is the standard bearer for the rapidly disappearing Vertigo line. This issue starts a new arc where Snow White’s “true” husband shows up. This can’t be good especially with Bigby out looking for some missing cubs. The missing cubs confuses me because I thought that was resolved already but since I pass my comics on to others I have no way to look it up and check it out.

The last book for this part is Uncanny X-Force #1 by Sam Humphries and Ron Garney. It did not grab me. Marvel is throwing out a lot of titles and many have been hits, this feels like a miss or a work in progress. It has another issue at least for its try out. It is certainly a convoluted book with way too much past x-history needed to enjoy all that is happening. Right now I could probably drop this series after only one issue, still debating.