Since it worked so well last week, let’s jump right into the review.  As always, there will be SPOILERS! 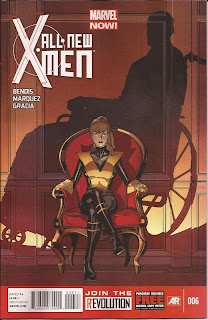 I’m in love with the X-Men again!  I don’t think I’ve enjoyed an X-book so much since Paul Smith left the title back in the mid-eighties.  This book is wonderful and it has cemented itself as not only my favorite Marvel NOW series, but my favorite current ongoing series as well.  David Marquez starts his three-issue stint on the title to give Stuart Immonen a breather and the art quality did not drop a notch!  This issue was rumored to be emblazoned with “NOW2” on the cover, but apparently that was only on the Diamond invoices.  It’s just as well, because we’re really still clicking along with the story.  No part one of six here, just ongoing continuous goodness.  I’m already hoping we get at least a hundred issues on the book.  I know Bendis can do it, even if I did skip his Ultimate Spider-Man and Avengers comics.

Jean Grey wakes up to see present-Cyclops and Magneto beside her bed.  They’re about to whisk her away to safety, when a naked Wolverine crashes through her window and goes right for her jugular.  As she struggles to stem the flow of blood from her neck, her eyes glaze over with images of the fiery Phoenix Force.  Of course, it was only a nightmare, but one that triggered her telekinesis ability on just about everything not nailed down in her room.  Regaining her composure, the items fall to the floor and Kitty Pride stops by to talk to her.  As Jean begins to reorganize her room, she’s bombarded with everyone’s thoughts via a great collage of thought balloons (I tried to read each one, did you?).  Kitty helps her to focus by closing a door on each one.  Jean asks how Kitty learned this and she said Jean had taught her. I loved Kitty’s comment about Jean’s “baby-face”.  Storm joins the conversation and declares that Jean is the now the team leader of the younger group.

“Well, except…It was you who convinced all of them to stay in this displaced time.  They listen to you.  You’re the leader.”

Past-Scott on the other hand continues to be ostracized due to the fallout from present-Scott’s A vs. X activities.  He abruptly leaves the condemning stares in the cafeteria room only to find himself in the garage faced with a tempting situation – a motorcycle with the keys in the ignition.  In a beautiful page layout, Scott drives away in the top panel with Wolverine in pursuit in the bottom panel.  Logan had recognized the sound of his engine.  Past-Scott makes his way to town and enters a convenience store.  It’s a great and funny out-of-time sequence, which culminates in this awesome exchange:

“This place IS a nightmare.”

Then Wolverine shows up and they have a heart-to-heart. (I gotta say I love these two page spreads, but I often read them wrong at first.)  Seriously, it’s Wolverine. How warm and fuzzy can it be? But believe it or not he actually does try to be understanding.  Unfortunately, he mentioned his unbreakable bones and when he least expects it, past-Scott unleashes on him (We’ll call this Wolverine gets “punked” this week part one), before speeding off on his bike.

Next we get a nice three-page scene focused on past-Angel while roosting on the Institute’s roof.  He didn’t want to stay in this time era to begin with and is already feeling abandoned by his teammates.  Then present-Angel shows up.  Five brief panels are all it takes to get his present-self up-to-speed on the time travel deal with past-Angel really curious about those metal wings.  Present-Angel embraces him with brotherly affection and the two kindred spirits go soaring off into the sky.

“Why are your wings made of metal?”

The last page teaser has Mystique learning about past-Scott’s presence and the next issue image looks to be right out of The Graduate.

I’ve heard complaints about Bendis’ dialogue with him using the same voice through different characters.  Well, everything reads true and authentic here.

GRADE A+: Great characterization.  Another FANTASTIC issue of the BEST Marvel NOW Title!

If you’re reading this on Saturday, there is still time to buy my digital copy on ebay. 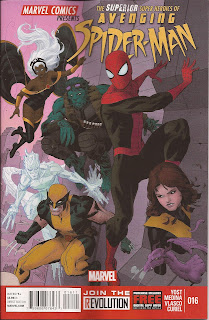 For those of you who think you don’t need to read another Spidey Team-up book.  This is for you.

Potto® Parker is out on patrol as the Superior Spider-Man, responding to the panic-sensors he’s scattered about town, when he encounters a giant garden spider scaling a building.  It reminded me of the old Tarantula model kit my brother had.  Spidey identifies the species via his new tech goggles and is about to pith the creature with a lamp pole when he notices the human eyes!  Lightning strikes and Wolverine and the X-Men (Storm, Kitty Pride, Beast, Ice Man, and Rachael Summers) show up.  Again using his Google goggles, Spider-Man takes the time to identify each of the X-Men, commenting on each one.  He’s a little worried about the telepath. 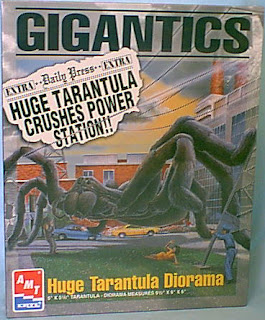 The spider-mutant thingie upchucks on Ororo and Spidey whisks her away.  Then he starts to take charge, much to Wolverine’s irritation.  “It feels right that they obey me,” he muses.  Upon reaching the ground after pummeling the creature, Wolverine starts to whine and complain to him, grasping him by the shoulder.  This doesn’t sit well with the Superior Spider-Man (with his really weird nose piece between his goggles) and he proceeds to TAKE WOLVERINE DOWN!!! (“punked” part two)  It was AWESOME!!!  (I can’t believe this didn’t get nominated as one of the Best Books of the Week on my stores website.)  While he explains his actions to the rest of the astonished X-Men, the Spider drops from the building, crashes to the pavement, and turns into a beautiful, naked blonde with no brains.

As Spidey ponders this latest development, Wolverine proving he really is the better fighter gets him in a choke-hold and demands that Rachael mind-scan him.  Potto® successfully weasels out of his predicament using “God help [him]…a little Parker charm.”  While the X-Men are led to conclude that Mister Sinister is behind this feat of genetic engineering, Spider-Man rightly concludes that the Jackal is more likely the culprit.

What a great issue!  It far exceeded my expectations. The pacing was fast.  The team-up was natural.  I loved the way Spider-Man’s new equipment was introduced and I really enjoyed his superior attitude, especially the Wolverine Smackdown.


GRADE A+:  Better than Superior Spider-Man # 1.  If you like your Spider-Man stories action-packed without all the Peter Parker supporting cast “baggage”, then this is your book.  Chris Yost and Paco Medina have created an awesome “first” issue.  I’m really looking forward to the next one.

If you’re reading this on Saturday, there is still time to buy my digital copy on ebay.
Posted by Matthew at Saturday, January 19, 2013