The beginnings are Star Wars #1 and Superior Spider-Man #1. Neither is true beginning but a new #1 demarking an event or new chapters. 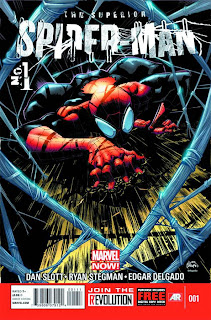 Let’s start with Superior Spider-Man #1 by Dan Slott and Ryan Stegman and yes there are SPOILERS. In fact why should I rehash the plotline as Matthew covered it so well on Saturday as you can see by clicking here. What I wanted to talk about was the marketing job and the planning that went in to how Marvel is handling Potto ®Parker. In the first issue we see that Peter is a “ghost in the machine” for Potto Parker. Peter is still “alive” and he is the guiding hand that is making sure Potto ® Parker does not cross the line. From the jump we know that the end of the story is Peter regaining full control of his body. This immediately saves the series from many fans of the book jumping off because who wants to read a book about the ultimate bad guy perhaps gaining some sort of redemption. Doctor Octopus was not just a bad guy, he was a villain. Of course Magneto has switched sides, so who knows. Still I think Marvel was concerned that they needed to make sure Peter Parker fans were not going to think he was actually “comic book” dead for even an instant. Now the game becomes how long before Peter gets full control and how badly does Peter’s reputation and status got hurt by the actions of Potto? We already have seen the ads that the Avengers will fire him and you have to assume the ruthless nature of Superior Spider-Man is the reason. I also foresee Peter’s friends abandoning him as Potto will seem as rude and obnoxious and will turn off those friendships. The story now becomes the good guy is possessed and the bad guy screws up his life. Then the good guy gets back his life and now has to repair/explain what happened. I’m curious to see if Wolverine is as unforgiving to Peter as he was to Scott Summers.  The book has my interest enough to buy a few more issues, but we need to see some good twists and turns and things I was not expecting to keep me on the series, otherwise I will await the announcement of Peter being back and check that story out. 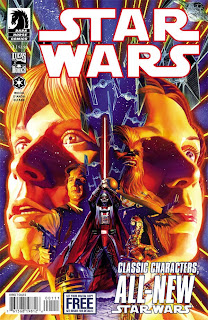 Star Wars #1 is by Brian Woods and Carlos D’Anda. It is the story of what happened after Star Wars Chapter IV and before Star Wars Chapter V. I was hoping for what happened after Chapter VI, but this makes a lot of sense. It was perfect timing as I had not gotten a Star Wars comic in forever and my interest was recently piqued by the advent of a Chapter VII coming out. The other Star Wars material was all about new characters or expanding on the entire Star Wars canon. That material never captivated me. Heck if I saw Star Wars on a comic it was a pass. Seeing Brian Wood’s name and reading they are filling in back story on the characters who I feel in love with it, made it an easy buy. We immediately get to see Luke, Leia, Hans Solo, Chewbacca and Darth Vader. It picks up after the first movie and is now developing what happened to the characters next. Knowing Brian Wood I have a feeling this is a long term limited series with a plan run of 24 or so issues. I hope that is the case and I hope that Dark Horse has the rights for the length of this story as I see no way Disney, who now owns Star Wars, lets Dark Horse continue with the license. What was best about the story is that it was so cleanly set up and reintroduced the key players that I’m immediately comfortable again and looking forward to the next issue.

The middles are Swamp Thing #16 by Scott Snyder and Yanick Paquette and Animal Man #16 by Jeff Lemire with Steve Pugh and Timothy Green II. Both Lemire and Snyder are favorite creators of mine and since issue #13 the story of Rotworld has been moving at a steady pace. Seeing the Rotworld Justice League and a plant Green Lantern, the fate of Abigal and Maxine are all great pieces, but the party has gone on too long. This entire ride is taking a year and a half to get to the conclusion. An epic scale and a grand story can work as an episodic comic if you have end points built in, but this has felt like the story that will never end. To make matters more bothersome since we are seeing the new DCU as a planet that has been overtaken with destruction on a planetary scale we know as comic fans that the magical reset button has to be hit. That means the story has zero impact. I’m hoping it at least has an impact on Animal Man and Swamp Thing going forward, but we know it can’t have a universe wide impact. The story is good, it is just that the first year of it could have been done is four issues to get us from here to there. At this point I’m enjoying it, but also can’t wait for it to end. It is like having a party at your house, it was a lot of fun, but it is now 1AM and that last guest needs to go home.

The ending is Sweet Tooth #40 by the aforementioned Jeff Lemire. This was a book that was told in chapters and led to a brilliant ending. Easily the best book of the week if you have been a fan of Sweet Tooth. In the span of one extra sized issue we see the rest of Gus’ life. He goes from the lost little boy needing protection from the world by Sheppard to a family man and a leader of the new order that is taking over the world. It was a satisfying bookend to a remarkable story of a post apocalyptic world. Lemire’s work has heart and soul in it and if you never bothered with Sweet Tooth, get the trades now and read the story, you won’t regret it.