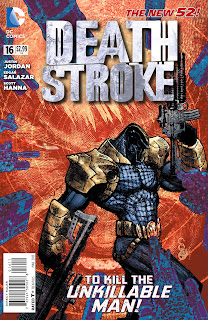 Let’s start with the review of Deathstroke #16 by Justin (Legend of Luthor Strode) Jordan, Edgar Salazar and Scott Hanna. It was a decent book. The man who would not die was killed by his own hand. Deathstroke figured out that only the bad guy could kill himself. Deathstroke set it up where the people of the country over throw the dictator and he is shown to be beatable as long as you keep beating him. The people line up to continue to mutilate him. Even though he can’t die he can suffer unlimited torture. In the end he accepts Deathstroke’s offer and kills himself. The story has a neat twist and was good in showing off Deathstroke as a successful assassin, master planner and top level fighter. Not the greatest story but Jordan’s best DCU work to date. The art was a little super hero generic, but as I said in Part 1 the new DCU has a base similarity in too much of the art right now and the overly designed costume of Deathstroke is a joke.

Jordan’s other work is Team 7, a book I dropped because it is a writer’s nightmare. Team 7 is a book with a mission to fill in back story for the new DCU which is a shifting quagmire. It also has too many characters and is burdened by a heavy handed editorial direction (IMO).

Why I hate the new DCU is no mystery because I harp on it all the time. Deathstroke and Batgirl brought it to renewed light. I’m slowly coming to the realization that while I have not let go of who I think these characters are, DC has let go. I need to get off their island if I don’t like it.

A big problem is no one is who I think they are.


Deathstroke is Slade Wilson but he has no children and certainly none that were a Teen Titan. All of that angst and history of bad blood that existed does not exist. This is Slade Wilson master assassin for hire. Who knows what his history is and since Team 7 is unreadable I never will know.

Batgirl is Barbara Gordon daughter of James Gordon police commissioner. She is not an accomplished hero, she is not the ex-lover of Nightwing, she is not the mentor of a new Batgirl, and she was not Oracle. She is a 21 year old who was in the super hero game as a teenager and was put into a wheelchair for 3 years by the Joker.

Nightwing is not a strong capable hero in his own right and in fact as time progresses his time as being Batman feels to be a faded memory. He was never a Teen Titan running his own group, he was never the lover of Starfire, he was Robin for half a minute and I’m pretty sure he has not had a chance to ever by a member of the Justice League. He is in fact a 22 to 23 year old that had a small fortune of his own and has sunk it all into a circus. He is a hero that is still somewhat untested and not quite as capable as he used to be. He is now a Court of Owls project that escaped them and became Batman’s protégée. In fact his name is a made up lie as his father had no true last name. He is not who I knew.

Tim Drake is a cipher. He is not the uber-smart young man who figured out Batman’s secrets and went on to be the best true detective of any of the Robins, he was never Robin. How he even fits into the Batman family is a mystery to me at this point. The tenuous origin that DC rolled out was forgettable.

Superman is Clark Kent and he grew up in Smallville and maybe he was never Superboy and he might work for the Daily Planet. Lois seems to have some connection to him as she maybe his boss or a co-worker. Jimmy Olsen appears to be closer to Clark’s age, other times Jimmy is a mere teen and still is only a photographer for a newspaper. Apparently Superman was a member of some sort of future Legion of Super Heroes (but he was never Superboy) and maybe he was killed by Doomsday, but I have no real clue. In Justice League apparently Superman and Wonder Woman are a couple. In some DCU ads it looks like she is hanging out in Superman’s book. I have no idea who this character is anymore. I will read Andy Diggle in Action and pick up Scott Snyder’s new Superman book, but I can’t read Lobdell and I have no clue at all as to what is Superman’s back story and who is the supporting cast.

Green Arrow is Oliver Queen and he is now Tony Stark, I think. No romance with Black Canary, no history with Hawkman, no traveling heroes with Green Lantern, no radical politics, he is a young man with plenty of  money and trick arrows. I don’t know him. Looking forward to Lemire’s remake of the character as I hear the whole dropped off on an island thing is still part of his background.

Flash is Barry Allen. There is no marriage to Iris West, there is no Wally West, there is no idea of who the flock Bart Allen is to Barry. Barry has never been tight friends with any other hero. He never died; he has never been much of anything. Apparently he has been around long enough to have a bigger rogues gallery than almost anyone short of Batman. Even if I had wanted Barry Allen back, he is no one that I know.

Hal Jordan is Green Lantern and he was not ever Parallax, he never lost Coast City, he never had some of his greatest battles, I’m not sure what his back story is anymore. He is apparently dead again and we have a new Green Lantern, but the Guardians are mad and yet they still provide power the GL corps. Hal’s back story has become squishy and seems to change as we move forward.

Hawkman is, I have no f**king clue. I read about 2 issues and have never looked back.

Blackhawks are not the Blackhawks, they are GI Joe.

There is no DCU history. The legacy of the DCU was a great strength. It has all been destroyed. The editorial mandates are okay if they have a plan but creators have spoken about the fast and furious last minute changes that have been a hallmark of the Didio era. These rapid fire change of directions seem to be even more prevelant as DC tries to recover from their great marketing stunt. The marketing stunt work, the aftermath and lack of planning is letting us see the new DCU for what it is. It was not the unveiling of a great new world, it was an explosion that caught our attention and has left in its wake scattered debris.

More and more DCU books fall off my list as the slow realization is that I have nothing vested in these characters outside of a perceived past history. I have to move past my love and recognize that what I knew has passed. I can follow some good stories, but nothing to make me want to buy very many DCU titles going forward. Marvel Now is trusting to planning and letting good creators tell stories and not imposing a rigorous house style. DC has quicksand planning, trust in editors, marketing gimmicks and a house style.
Posted by Jim at Monday, January 21, 2013