Disturbing.  Not because it's soaked in gore, though the cover might lead you to that conclusion.  This is disturbing because Kevin Colden, writer and artist, is telling a story about an actual event that occurred in a section of Philadelphia called Fishtown. 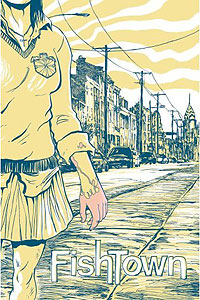 In fact, the Philadelphia setting is what drew me to buy this book.  Well, that and the deep discount on the price.  This makes two weeks in a row of high quality books from IDW that I've located on the cheap.  Not doing any service to IDW's bottom line, though more likely a disservice to the bottom line of Cards, Comics and Collectibles, but my wallet and my reading pleasure are benefiting.

Colden starts with this quote from Jean-Paul Sartre: "It disturbs me no more to find men base, unjust, or selfish than to see apes mischievous, wolves savage, or the vulture ravenous."  If that's not a hint about the low territory we're entering, I don't know what is.

Colden tells the story from the perspective of police interviews of four young people.  They are three boys and a girl, all late teens, high school age.  Through the intereviews he brings out the story of murder until it circles back to arrests and interviews.

It's no surprise that these four have killed an acquaintance/friend.  The story is about how they reached that point, their rationalizations for their actions, and how they carried out the murder with absolutely no thought about consequences for themselves or anyone else.  Of course they have no idea the effort it takes to kill someone using blunt objects.  Of course they suck at covering up their involvement in the murder.  What they excel at is pushing blame away from their individual decisions and onto their cohorts.

It's not a sad story because a young man, or nearly young man, died.  That is sad, and the impact on his family isn't ignored.  The tragic aspect is the utter disgust that you'll feel for the perpetrators.  Colden tells the story so well that you can hope that there's some redeeming quality to these four.  It's their back stories we learn.  They're not unusual people, for good or ill.  And yet they reach the decision that's devoid of empathy for another person.  Sartre may not have been disturbed by this story (and we'll never know), but I was.  I consider that successful storytelling by Colden.

Adding to the bleak picture are the actual pictures.  Colden uses only two colors.  Most things are colored with a shade of pale yellow.  Only blood shows up in any other color, and even that's a pale red.  It lends a washed out feel to the story that's in keeping with the depressed community and even more depressed lives of the protagonists.  Colden has great perspective in his art and employs the interviews of the suspects par excellence.  The deadpan expressions through so much of the interviews, with the occasional dumbfounded or dismayed.  Some come to more of a realization of their end circumstances than others, and Colden has that well displayed.
Posted by Thomm at Friday, January 11, 2013