Once I fall behind on my weekly reading it takes forever to catch up. This week I did not get around to everything once again but these 4 from Marvel I found to be worthy of commentary. It is amazing how many different Marvel books I’m getting now. The Marvel Now stuff has been a great shake up in the status quo and is producing some excellent story lines. While I will never get the true change I want I can get some interesting stories and solid entertainment. 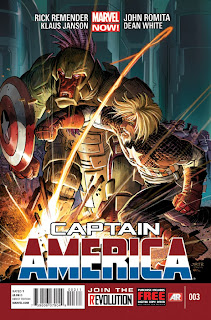 First up is the much maligned (at least comments I have read) Captain America series by Rick Remender, John Romita and Klaus Janson. The third issue has Cap finding out that Zola has grafted some sort of machine into Cap’s chest and Zola is now part of Cap. Remender is truly giving us a madcap Kirby type of story. Also he is mixing in parts of Steve Rogers early childhood and parts of Zola’s past from pre-WWII Germany. Each character is being given additional depth into whom there were which reflects on who they are today. With the one year jump in the time line Remender is playing out the story of Cap being stranded in Dimension Z trying to protect the little boy he rescued from Zola’s lab. Dimenson Z is its own world and Cap is now mixing it up with a monstrous native tribe that alternatively goes from trying to kill him, to saving him, to trying to kill him. The grand reveal of Zola being imbedded in Cap’s chest was odd as how would anyone not notice for a year that part of your chest is now a metal plate. I know it was under his skin, but you would notice something this large. Even comic book logic has to pass muster. The radical departure from a more noir type of Captain America to the pseudo science fiction Jack Kirby approach is very jarring, but at this point I’m enjoying the ride. I have a lot of questions about how or if Remender can make this a true change to the status quo. Since Captain America has had no true status quo before or ever had a private life it is easy to change nothing to something. Still I believe that they will not say that Cap has been out of the MU for all of this time. At the end of the adventure he steps back out of the train like he left only moments before. For Sharon it will be minutes or hours for Cap it will be years. That type of thing can be allowed within the MU. 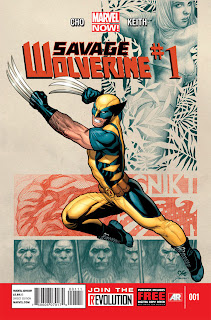 Next up is a book that I almost skipped Savage Wolverine #1 by Frank Cho. Frank draws great women but I was not sure of his abilities as a writer. After issue #1 I’m still not sure of his ability as a writer. Frank’s art is clean and his story telling is solid, still needing a little work on an occasional sequence, but it does the job. One thing Marvel does well and that is to let a creator tell almost any story they want with a set of characters. It exist within the MU but it is never given a firm time and place. Wolverine is a messed up character because of his over use at Marvel. He is the berserker killer, he is the best there is at what he does, he is the ultimate loner, the torch bearer for Professor Xavier’s dream, the headmaster of a school for mutants and is an immortal. While making him a convoluted mess, it means as long as you portray him as the merciless gruff killer with a heart you can make any type of story work.  At times it does not make sense to me why Wolverine gets to be the good guy and Frank Castle is the bad guy. Except I do know the answer, it is comic books and they were cast that way.  So back to the actual comic, Wolverine is literally popped into the Shanna story line of her and some Shield guys exploring a mysterious island in the Savage Land. Shanna and the Shield crew crash in the jungle eight months later Wolverine is just popped into the area with no rhyme or reason. Logan and Shanna are now left to solve the mystery of the island. We have dinosaurs, caveman like tribes and a myriad number of dangers for our couple to face. I’ll give it two more issues to make me care and give me some explanation of why Wolverine was teleported or whatever into the story after eight months. Again comic book logic still needs a logical path. Also the strength of letting a creator tell his own story and not worry about the bigger MU also means the stories have to great since they have no impact on the character at all. Bottom line it was an okay start but needs work. 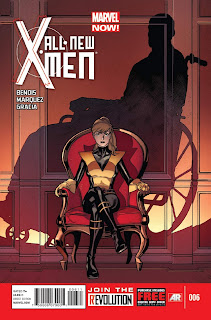 The third book from Marvel is All New X-Men #6 by Brian Bendis and David Marquez. Again Matthew has already reviewed the book and you can see his summary here. I won’t rehash the plot. What I will say is that for the first time in decades I’m truly enjoying an X-Men book. It has a spark and a vibrancy that is unlike what has gone before. I’m wondering if the addition of the Uncanny X-Men title will just add to the overall scope of the books. I have also started to wonder if the end game might be something along the lines of what happened today cements what has already happened. In other words it can be a classic time travel story where you think you are going to right a wrong but in fact do something that creates the wrong. Normally that is done by someone in the future going back in the past, but with some clever story telling this can work just as well in this story. It could be something as simple as Jean and Scott are exposed to something which attracts the Phoenix force to them. Heck if that is the end game this series can go on for a very long time. My big concern is there is no end game and Bendis and Marvel have decided to not care about the time travel implications and just let the old and new versions of the characters run around together forever. That would suck as badly as the ending to the TV series Lost. 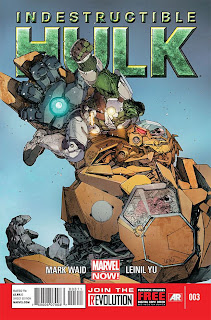 The fourth marvelous book is Indestructible Hulk #3 by Mark Waid and Lenil Yu. Now in the fan press Mark is very opinionated and I disagree with him on certain points, but the man knows what he is doing. All three issues have been solid stand alone chapters with a beginning, middle and end and yet it is building a new status quo for the book at the same time. This is a master class in how to do a series. I know nothing in Marvel or DC is true change, but another chapter in a character’s life done right can be entertaining. Mark is doing just that as this issue is about Shield using the Hulk against AIM and we got the “B” story line of Banner’s staff being pulled together. Something Banner has not had in many years is a solid supporting cast and Waid is building one for us. Lenil Yu is not my favorite artist, but his layouts and splash pages are as dynamic and powerful as you could possibly want. Slowly Yu is winning me over to his style. Finally the AR feature, which is often total garbage, was great on this book and what I want from the AR stuff. The AR was Mark Waid doing commentary that added to my enjoyment of the series. Waid has been a long time editor/writer and someone who has maintained a high level of excellence for decades. Waid has gotten better and better over the years. I wish he was the DC EIC and co-publisher replacing Harras and Didio.