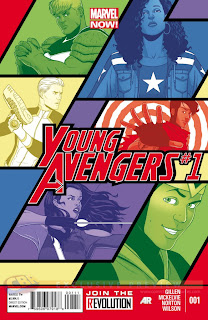 Young Avengers #1 by Kieron Gillen writer and art by Jamie McKelvie and Mike (The Answer) Norton was a surprise. While many people were huge fans of Gillen’s run on little Loki the book just never worked for me. After listening to the AR feature on this book that recounted Loki’s history I’m glad I didn’t follow the whole thing as it is a convoluted mess. The net result I believe is Loki is Loki again, just younger. I’m still not sure. Of course after reading this book the flip side is also true as I may one day want to read Gillen’s run on Loki as I’m starting to enjoy Gillen’s writing a little more.

Credit this book with making me more of a Gillen fan. In many ways it is the typical introduce the cast. It starts with Kate Bishop sleeping with Noh-Varr (ex-Captain Marvel, Protector) in space. Skulls attack and she takes off for Earth. We have brief scene with music playing that felt like a nod to Phonogram which was Gillen and McKelvie’s first claim to fame. I never liked Phonogram and believe it was an age thing more than anything else.

Next we shift to Wiccan and Hulkling. The young gay couple who apparently are trying to lay low with Wiccan’s parents (he is adopted), Hulkling is playing the hero and this upsets Wiccan. I’m still not 100% comfortable with all the emotion and lip locking between a gay males in comics, but it does not offend me, it is just something that at times is still jarring. It is probably a good thing that it is being portrayed more openly because once everyone gets used to it maybe the base line prejudiced that exists will lessen. There is a role for the entertainment medium from a societal side of things. More importantly having never followed the Young Avengers in any strong way before I only have a passing familiarity with the characters and Gillen’s work in these pages establishes them. After reading these few pages I got a sense of their powers, an idea of who they are to each other and their feelings about being heroes. Kate Bishop I already knew from the Hawkeye series and Protector I knew from Avengers. So now we have four possible cast members set.

Next we met Loki and Miss America Chavez. Now within the context of the comic I did not get a clue as to who Loki is now and Miss America Chavez is a blank slate to me. I believe this is her first appearance so her being a blank slate is fine. The whole scene shows Loki apparently trying to covertly prevent Wiccan from doing the wrong thing (apparently getting Hulkling’s Mom back but from an alternative reality?). Miss America Chavez (unwieldy name) shows up and Loki conveniently tells us her powers and a fight ensues. Now I know in the “real” world Loki would not yell out her powers, but this is comics and I appreciated that type of convention being used as it helps establish what she is capable of doing. At the end Loki and Miss American take off as Hulking runs out to see what was causing all the commotion (essentially Miss America doing a little reconstruction of the building).

The book ends with no group even being close to being pulled together, but Hulkling’s mother is revealed as a menace and we have the Skrulls attacking. All in all it is a good opening that has me looking forward to a series that on the surface I could have cared less about.

The art by McKelvie and Norton is just beautiful. The book has clean lines, great layouts and one double page that had graphic designer written all over it. McKelvie’s art seems to be maturing from a slight almost cartoon feel to art that carries a little more weight. I know I’m not describing it well, but his work from Phonogram to this just has a better feel to it.

Another possible winner from Marvel Now.