For a change of pace, let’s jump right into the review.  As always, there will be SPOILERS! 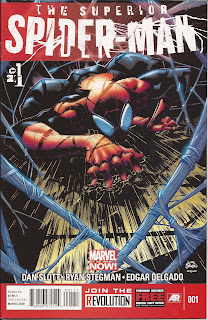 This was an enjoyable first issue, but I did have some quibbles about it. Potto® Parker visits the grave of Otto Octavius.  The tombstone is really weathered and the dandelion laden grass is growing tall around it.  Sounds like an accurate depiction of a cemetery doesn’t it?  Sure, if the death of Otto occurred years ago instead of the day after Christmas.  Oh, I get it.  This must be the tombstone from his first death back in the mid-nineties! Because I tell you, someone is probably still conducting the autopsy on his deteriorated body after ASM #700.


When Potto® hears a dispatch on his blue-tooth earpiece about a robbery in-progress; he quickly changes into Spider-Man.  It’s the Sinister Six or perhaps it should be called the Snickering Six, since it’s comprised of some really B-list villains: Boomerang, Shocker, Beetle (female), Speed Demon, and my two favorites Big Wheel (Overdrive) and the Living Brain!  I don’t think the Living Brain has been seen since ASM #8 (which I used to own in high-grade).  It’s funny over the years when these villains (at least in their original incarnations) first appeared they were credible threats to Spider-Man (or at least challenging), but now they’re nothing but jokes.  Call me sentimental, but I have fond memories of some of those stories.

Potto® is especially ticked off at this gang for misusing the name of the group he formed back in ASM Annual #1 (which I also used to own).  He’s doing a fine job humiliating them when the Speed Demon starts punching him in the head several hundred times.  He’s not about to suffer that type of punishment again, which caused the failure of his own body.  (Reminds me of why I’ll probably never play basketball again.  After the extremely painful recovery of my highly successful sinus surgery, I wouldn’t want to risk a chance of my nose breaking again, which could happen if I accidentally catch the ball with my face!)  So, he swings away right in the middle of the battle.

His departure is short-lived; however, when an explosive boomerang makes a b-line toward a police officer. Spidey leaps down and pushes the cop to safety while the device detonates near his back.  Potto® quires, “Why on earth did I do that?”  Boomerang takes advantage of the stunned web-spinner and attempts to cut his throat with a razorang.  Spider-Man quickly turns and zziks out some claws and then shhripps his chest, drawing blood. “Since when does Spider-Man do THAT?!” Boomerang cries.  The Six escape in the Big Wheel.

A thankful police force asks Spidey if they can do anything for him and he requests that they deliver the Living Brain to Horizon Labs.  At work Potto® is his typical condescending self and has begun to dress in HIS traditional lab outfit: goggles and a white coat buttoned to the side.  Seriously, do you think it won’t take people too long to associate his fashion sense with the bad late doctor?  Max is concerned that much of the inventions Potto® creates could be too easily weaponized, but he can’t argue with the revolutionary ideas he’s producing.  I still can’t get over how quickly people can invent stuff or do complex work tasks in comics; it’s more unrealistic than sticking to walls!

Potto® gets a call from MJ about their upcoming date night.  At first he’s perturbed by the interruption, but he relishes the thought to “seeing” her again.  During their dinner out, I love the way his narration boxes cover up MJ’s word balloons to illustrate how he isn’t listening to her at all.  Throughout he eyes her lustfully, drinks alcohol, and continues to listen to his ear-piece, which is transmitting from the Sinister Six’s location.  His clawing attack on Boomerang had actually released 80 nano-spider-tracers with GPS and audio transmitters. When he learns of their next attack, MJ questions why he doesn’t go out and stop them right away.  “Tactical advantage”, he says.

The Sinister Six’s next target is (surprise surprise) Horizon Labs. They’re about to steal another part to their planned weather machine which they had hoped to use in blackmailing the city to prevent them from unleashing a tornado.  Spidey’s set up several traps for them including a giant spider-web, which he just sits and waits in like a real spider would.  Speed Demon begins running towards it, when Potto® starts one of his inventions that creates a frictionless surface beneath his feet.  He then webs him by the neck almost yanking his head off.  A power dampening field takes care of most of the other members until finally only Boomerang remains standing.  He and Spidey face off in front of the news cameras that Potto® called ahead of time.  When Spidey puts a choke hold on him, Boomerang yields. But Potto® isn’t finished with him yet.  He beats Boomerang to a blood splattering pulp and just before he delivers the fatal blow, he stops.  It was Peter’s influence (depicted as a ghostly form) that stayed his hand.

We all knew Peter would be back somehow, so it’s good that Slott didn’t waste any time pretending it was all some big, long drawn out, mystery.  Everything is set up pretty nicely for a first issue.  You could have come into this series cold and easily understood what was going on.  And it was entertaining to see how Potto® did things differently than Peter, especially the let’s plan ahead instead of using my body as a punching bag method.

I really like Ryan Stegman’s art.  I was first exposed to it when the Scarlet Spider series debuted last year.  There he was inked by Michael Babinski, here he’s inking himself.  It has a sketchy and raw feel to it, similar to the new logo.  His style is slightly reminiscent of Todd McFarlane’s signature ASM work. However, to be honest, I think his pencils look better under Babinski’s inks, more polished and finished.  Maybe the style is intentional, but I think it detracts from the look of the book.

GRADE B: A solid start to the series and a perfect jumping on point for new readers.  It’s fascinating to watch this version of Spider-Man, because as the villains discovered, he doesn't do what’s expected. Enjoy it while you can, because it looks like Potto® Parker may not be around for long.