The Week of January 2 in Review Part 1 of 4 Spider-Man, Spider-Man The Not So Friendly Neighborhood Spider-Man

As always we have a few notes about how this is going to work and why. Not that anyone cares, but I have a desire to explain my rationale as some sort of form of self therapy. I just received the last two weeks of books on Friday as paying for postage on what was essentially a skip week made no sense. So the week in review is including books from the last week of the year and the first week of the year. Next my time is limited as I have a lot of football to watch. I love these two weekends as we get four NFL games all with their own time slots and theoretically get the best teams playing each other. Often these can be the most competitive games, plus I have skin in one game as the Ravens are playing. By the time this is posted we will know if next weekend also has the Ravens or not. What that all means that I’m writing up all the books that I have managed to read. Also I have added an opinion piece to end this week in review cycle and hope to do that more often in the future.  Finally we have the de rigueur links for next week’s books with the clean and concise list here and the detailed listing here. The books I’m looking forward to the most are Detective Comics, Sweet Tooth, Superior Spider-Man, Star Wars (By Brian Wood) and The Legend of Luther Strode. 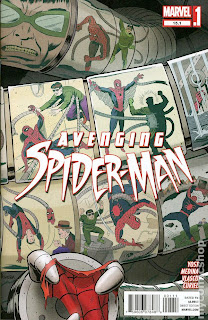 This part is devoted to the two Spider-Man books and we will go in reverse order. Avenging Spider-Man 15.1 by Chris Yost, Paco Medina and Juan Vlasco was a nice bridge from Amazing to . We get our first glimpse of the new Peter Otto Parker. It is a clever examination as the character relives both who he is and who he was. It is also a good sales gimmick to try and drive some sales into Avenging Spider-Man, but I’m long done with team up books so this was a one and done for me. Still Chris Yost does a nice job with Potto Parker realizing that Peter Parker always won the day. Add into that a few costume changes and we get the new iteration of Spider-Man. A very nice companion piece but I still feel this book has no impact on the regular title and therefore will not get added to my list. 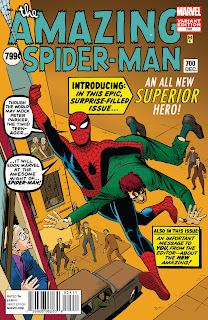 By now you have read Matthew’s review, have read my pre-review and heard a thousand opinions and yet I will still bore you with my impression of the actual comic, Amazing Spider-Man #700 by Dan Slott, Humberto Ramos and Victor Olazaba. It was a decent story. Doctor Peter Octopus and Spider-Octo Man duke it out. As Doc Poto lies dying he has the little robot beam his life flashing before his eyes into Spider-Octo. Potto Parker is now more willing to try and live up to being Spider-Man.

As for what I think of the book, first I’m not a fan of Ramos’ work in Spider-Man. I think he strays too far towards the cartoony side of the coin. The portrayal of the corpse that was Doctor Octopus was also bizarre. I’m not sure how that thing was alive at all, even in a comic book. Ramos is a good story teller but his cartoon style is off-putting to me in Spider-Man. His work on Impulse, Leave it to Chance and other books were better fits for his style.

The story itself was stupid. Doctor Octopus has his brain pattern in a robot. That robot puts his brain pattern into Peter Parker and Parker is put into Doctor Octopus. The base question becomes how is Peter Parker not still Peter Parker?  In comic book logic the bad guy has taken over but we are already seeing hints that Peter is still running the show. Then Doctor Otto Parker tries to use the robot to regain his body but Potto Parker is ready and has shielding inside his costume that protects him. As Peter Octopus lies dying he uses said robot, luckily lying about, to beam his life flashing before his eyes and it overwhelms Spider-Octo into now not wanting to be Spider-Man. Octo Spider-Man then gives Doc Peter a dying wish to essentially be Spider-Man and protect his family and friends. Why is this any different from what had happened before as Spider-Otto has been acting like Peter before this occurred anyway. So we have Otto’s mind imprinted on Peter’s mind and now Peter re-imprinting or something on Otto’s mind which is imprinted on Peter’s mind. Yeah, even comic book logic fails me with this one.

The bottom line is that this is a silly chapter in the life of Spider-Man that will be a nice sales bump as I and others follow Superior Spider-Man for a little while to see how it plays out, even as we know how it will end. It will either be Peter’s mind reasserts itself or Otto eventually gives way and allows Peter to reassert himself. Another possibility is Otto creates a new body for himself and gets out of Peter’s as he can’t stand how “weak” Peter’s mind is making him. In other words various comic book solutions present themselves. At the end Peter Parker is Spider-Man and he is Amazing. If Superior goes too long then I will most likely drop the book. Dan Slott is a comic book writer who has the best job he is likely ever to get. I have the feeling he has been a fan for years and knows how to deliver a good comic book story. I also think he may never have a seminal run that makes everyone stand up and take notice of what he has done with a title. Not everyone can be Alan Moore, Grant Morrison or Claremont/Byrne and it is not a condemnation of his work, just an observation. I have enjoyed much of what Dan has written but see him as a writer that major companies need to produce entertaining stories about their characters.

I think the book at least had people taking about Spider-Man again and not just with hate. It also has the “I never want to read the book again” crowd. At the end of the day it has me signing up for Superior for  a couple issues and that was more then I was buying of Amazing.