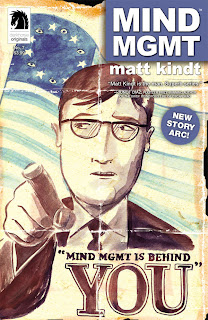 Mind Mgmt #7 by Matt Kindt is another issue in what has to be one of my favorite series right now. Even better it is a reader friendly jump on point with a brief summary of what has come before that gives a reader all they need to know to jump in.

The short story is Mind Mgmt is a secret organization that has agents with various mind control type powers. From influencing people with ads, influencing decisions, making people fall in love and letters that can kill you to healing almost any injury to yourself. The focus of the story is Meru. She is the young girl who survived Harry Lyme’s (one of the most powerful agents) meltdown when he pushed a city to destroy itself. Mind Mgmt itself was disbanded and now it appears the organization is trying to reform. Meru is a target and Harry Lyme is out to try and rescue her.

What makes this series so inventive it the multiple things that are going on at once. Matt is both writer and artist and I can only imagine how much work he is putting into this series. I believe he has a bible about the history of Mind Mgmt and has detailed notes on all of his main characters. I’m guessing he has the main story beats planned out for the entire story of Meru and Harry Lyme. Each issue not only has a standard comic book style of telling a story but the borders of each page often spell out another story that is either related or will be related down the road. This issue in addition to the side of the page, the bottom border also spells out the idea of assassination letters. These are letters that actually kill you if you read them. One great part of the story was Meru telling Harry that she read the assassination letter sent to her and it was just a bad haiku. This makes sense since she was the only one who survived Harry’s meltdown and that means Mind Mgmt has limited influence on her.

Another great element is the idea of what is and what is not real. Since it is about our minds and what can be done with just the mind you have to wonder how much of anything is truly real. In fact that led to Harry’s breakdown in the prior arc as he realized that his wife only loved him because he had influenced her to love him. If you get philosophical how different is that from us wooing our own spouses? I know it is different but the release of the same endorphins could be involved. And that is the fun of this book, not only do you get a great story but you think about what is going to happen next and these other ideas crop up in your mind as you are reading the book. It is a comic and a story that makes you thing and stays with you long after you are done reading the book.

If I have any ability to influence you with my mind powers then right now I’m trying to influence you to buying the series.  I’ll try another mind test and send out a message for Matt Kindt to sell me a page of the art for only $100. Hope this works.
Posted by Jim at Tuesday, January 29, 2013