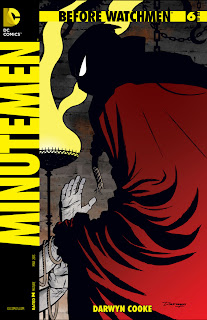 Darwyn Cooke’s six issue mini-series Before Watchmen Minutemen was a great story. Using Nite Owl’s book about the heroes as the premise for opening up the history of the Minutemen allowed Cooke to craft an amazing tale. I think the ending of this series sealed the deal as this being Cooke’s best work since the New Frontier for DC.

The twist at the end is that Hollis was played by the Comedian into taking down the Hangman. Hindsight being 20/20 I should have realized that Cooke would never make it such a simplistic story. If it had played it out with Nite Owl capturing the child killer and taking Hangman down it would have been a little too clean and cookie cutter and would not have rang as true to the source material.

One of the things I remember taking away from Watchmen that no one was 100% clean. There were good people, but even the good people had flaws. Not so much as feet of clay but just that regardless of the fantastic circumstances they were involved in they are still human.

Hollis is the most noble of all the heroes in the world of Watchmen and even he did not quite understand everything that was going on. The Comedian at the end of the day forces Hollis to edit his book and take out some parts and also plays Hollis for a fool by having Hollis take out Hangman. The Comedian never forgave the Hangman for what he did to him.

It was a great scene when the Comedian confronts Hollis and lays out the entire story. The vile nature of the Comedian is oozing out of him as he tells the story. Hollis has to give in to a certain extent but still leaves in the one part about Blake (The Comedian)’s attack on Sally. At the end Hollis retires to run his car repair business as acts as a surrogate father to Laurie (the second Silk Spectre). Hollis is a good guy and is truly heroic and noble, yet he too has his failings.

Cooke’s stories just have such a ring of truth to them. Not the circumstances, but the people. At the core of all of his stories is how the characters act. His people are very real and consistent. In the case of Hollis you are not going to see him betray people who are his friends and his innate nobility transcends any failings.

Once the collections come out, if you missed this stuff, I highly recommend Cooke’s mini-series. Along with New Frontier two of his best works for DC. Of course his Parker adaptations are also worth getting.