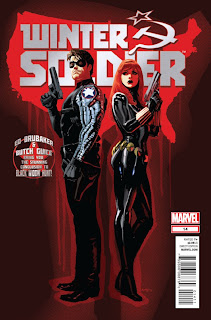 The Winter Soldier was the swan song for Ed Brubaker at Marvel comics and man talking about going out on a high note, Ed hit a home run. I remember Michael Jordan quit after hitting the winning basket for another NBA championship. Years later he came back and played with the Wizards, I hope Ed stays away, at least from this character because this story is one that could even stand as a great way to let the character exit from his own book and go off stage for a few years.

The art by Butch Guice and Brian Thies was great. I loved all the action scenes and while at times the book is almost too dark it fit the tone of the story. It seems that lately more and more I’m reading a book and I say I want to own that page of art. I blame Lee who was the siren calling to me to get me deeper into buying original art. I owned like five pages and now with lee pushing I must have 15 or maybe 20 pages of art. Anyway the one scene with the Black Widow cart wheeling away from gun shots was a page to own.

The actual story itself was the culmination of the rather long Black Widow hunt. Bucky’s final protégée from his Winter Soldier days had captured her and reprogrammed her against Bucky and Shield. The adventure took its toll on the group.

And if memory serves white Nick Fury disappeared from the series. If I’m correct it is just an interesting note that Marvel is pushing so hard for the comics to be more reflective of the movies. I wonder if Disney is not pushing this idea harder in some flawed idea that this is way to push the movie goers to the comics. If they think it is important they should look at Walking Dead, the books are not a perfect reflection of the show and the show has garnered a ton of new fans for the comic. I’m not sure anyone has figured out that formula.

Okay, short digression but sometimes it becomes a stream of consciousness thing in writing these commentaries. What made this book such a great one was the ending and yes I’m going to spoil it. Bucky wins and they restore the Black Widow. The only thing they cannot restore is her memories of Bucky. The love and memories of what they had meant to each other is gone. His friends so they can still try more things but Bucky tells them to stop, she has had her mind messed up enough, leave her alone. This was a true act of love selfless and caring of another.

While due to the long history of any Marvel character that has been around for fifty years, the love affair of Bucky and the Widow could be seen as superficial since she has slept with half the Marvel Universe. Brubaker had eradicated that effectively over the course of his work in Captain America and this book. It all rang true. Bucky’s pain felt very real and while he won and saved the day, he lost personally.

What a way to walk away from a series.

Part 8 is next, you would have never guessed unless I told you, right?
Posted by Jim at Tuesday, January 29, 2013