Indies Previews for March Part 1 of 3

Lee: I found out something interesting this week. Thomm doesn’t look at the covers when he comments on books! How can he not? I basically pick based on cover alone which means it’s a big part of my decision/commenting process. But, to each his own… even if said process is all messed up.
Thomm: I look at the cover if it seems relevant. Otherwise, I’m going with the promo blurb. Art guy versus story guy, once again. :01 First Second
Olympians Vol. 05: Poseidon, Earth Shaker GN by (w/a/c) George O'connor
In the next volume of Olympians, author and artist George O'Connor turns the spotlight on that most mysterious and misunderstood of the Greek gods, Poseidon: Earth Shaker. Thrill to such famous stories as Theseus and the Minotaur, Odysseus and Polyphemos, and the founding of Athens - and learn how the tempestuous Poseidon became the King of the Seas. 80 pgs, FC, 7.5x10, $9.99
Lee: These books are great and I can’t believe wait for the next one. Actually, I’ll have to tell the kids because they have devoured every one. If you, or your kids, like Greek myths then this is not to be missed.
Thomm: Love the Greek myths, and I know all the stories in this book, so I’m not so likely to get it. I like the new twist on Greek myth going on in Azzarello’s Wonder Woman for my Greek myth stories these days. And that has really creative depictions of the gods, too. This one has a Poseidon who looks like Lobo in a loin cloth.

7 More below the break 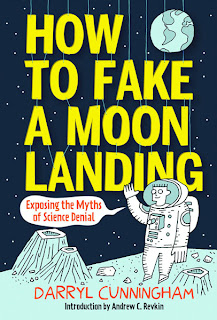 Abrams Comicarts
How to Fake a Moon Landing: Exposing the Myths of Science Denial SC by (w/a/c) Darryl Cunningham
Is climate change real? Evolution: Fact or fiction? Was the moon landing a hoax? Does homeopathy work? Is hydro-fracking really safe? In How to Fake a Moon Landing Darryl Cunningham takes on these and other hot-button topics by using critical thinking to illustrate that facts really do matter, revealing the manipulation, by both the left and the right, of documented information. Cunningham's easy-to-follow narrative allows readers to draw their own conclusions as he presents his research and sources via comic book storytelling. 176 pgs, FC, 6x9, $16.95
Lee: Now this is what I call awesome. A book about science denial is definitely what we need. I should order a dozen copies now and just leave them around my office. Thomm: You work in nuclear engineering. How many science deniers can there be? Now a short trip to Liberty University, that’s a good place to leave these around. This is definitely awesome. It should be posted on line and Facebook. If I could have it could up as an automatic response every time someone puts up some nonsense about god or guns, I would. 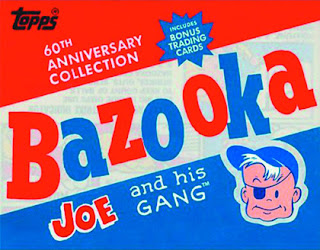 Bazooka Joe and His Gang HC
Bazooka Joe and his gang have dominated the world of bubble gum since their debut in 1953 with the irresistible combination of cheap laughs wrapped around pink, sugary sweetness. This book celebrates the iconic mini-comics and presents an extensive profile of Wesley Morse, the cartoonist and original creator of Bazooka Joe. The book also includes reproductions of 200 classic Bazooka Joe comics, complete with jokes, fortunes, and tiny ads for mail-order merchandise. 224 pgs, FC, 7x5, $19.95  Just in case you don't remember the comics, you can read some here.
Lee: There is a certain appeal to this material because, let’s be honest, who doesn’t remember the Bazooka Joe jokes. They were all terrible which was more than half the fun. The question is, do I need a big book of them. Maybe.
Thomm: See, they should have printed them in the original size, making millions of middle aged nostalgists have to squint for 224 pages. I remember them being blurry and hard to read quite often even when I was a kid. And the gum was terrible. 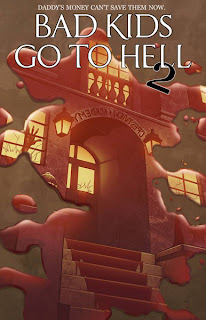 Antarctic Press
Bad Kids Go to Hell Vol. 2 #2 by (w) Matthew Spradlin (a/c) Alex Williamson
Two students are dead as the remaining three make their way through the halls of Crestview in an attempt to escape this Saturday's deadly detention. Though none of them are what they seem, one of the surviving students may have more insidious plans for his or her classmates. #2 of 3, 40 pgs, FC, $5.99
Lee: I have no idea if this is any good but I love the title. I live in the south and I’m pretty sure my kids have heard this before. In their school to be precise. Maybe I should buy a dozen copies of this too and hand them out at the youth basketball game!
Thomm: This is a great title with an interesting premise. Six bucks for 40 pages isn’t bad, and the fact that it’s only got two more issues to this volume means it’s not going to drag on forever. The cover looks good, too. 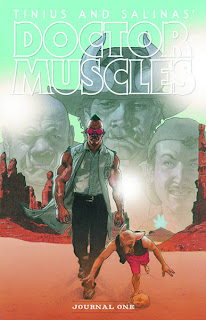 Bogus Publishing
Doctor Muscles: Journal 01 GN by (w) Austin Tinius (a) Andrew Whyte (c) James Brunner
The smartest man in Philadelphia, Dr. Arthur E. Muscles, is about to retire from a life of science when things go horribly awry. A fortuitously modified formula at his research laboratory transports Dr. Muscles to another dimension, known as Quargo. Dr. Muscles now finds himself the lab rat in a maze full of perverted wizards, enslaved species, beastly giants, and western motifs. His only shot at returning to Earth is to reach the Ultra-Lord at the end of the maze. Along the way, Dr. Muscles picks up various misfits and does his best to do the right thing, which usually ends up backfiring. 146 pgs, FC, $14.95 Visit the artist here.
Lee: This is a pure take-a-chance book for me. The hype is ‘eh’ but there’s something about the art that appeals to me. The first time I looked at it, I loved it. The second time I could see the roughness which is to be expected. But, even with that there’s a certain something that appeals.
Thomm: The promo is pure quest story, albeit an unwilling quest. To channel WC Fields, Quargo must be a terrible place if the good doctor wants to get back to Philadelphia. ‘Course, I love Philadelphia, land of my birth (well, its suburbs). 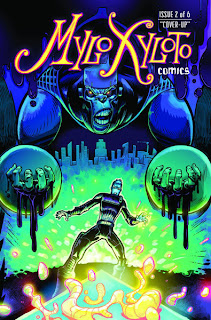 Bongo Comics
Mylo Xyloto #2 by (w) Coldplay (a/c) Alejandro Fuentes
The citizens of Silencia have long been suppressed under the iron grip of Major Minus, but now that the loyal soldier Mylo Xyloto has caught a glimpse of a brighter universe, the world starts to change right before his very eyes. 40pgs, FC, 3.99
Lee: Let’s start with the obvious… Mr. Mxyzptlk has a case for copy right infringement. I can’t pronounce his name, I can’t pronounce the name of the book… seriously, wtf? Oh wait, it appears that I know less than I knew before… Mylo who-z-it is the name of Coldplay’s last album. Who knew? Apparently my musical tastes are not mainstream enough.
Thomm: I saw Coldplay getting the credit for writing. Is it bad enough that no individual band member wants to shoulder responsibility for it?Lee: Maybe a better question is why is Bongo, home of the Simpsons comics publishing this? IDW is always publishing larks by various musical geniuses.
Thomm: Well, that sums it up on whether Coldplay are musical geniuses. 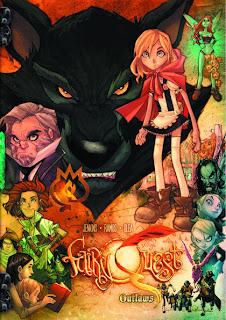 Boom! Studios
Fairy Quest #1 by (w) Paul Jenkins (a/c) Humberto Ramos
The world of Fablewood, where all of the stories that have ever been told live side-by-side, is a sinister place indeed! Under the watchful eye of the dreaded Mister Grimm and his Think Police, Red Riding Hood and her Wolf must risk everything to try and escape and find sanctuary in a mysterious place called the Real World Written by industry legend Paul Jenkins (Sentry, Deathmatch) and drawn by comics superstar Humberto Ramos (Amazing Spider-man), the smash Kickstarter success story, Fairy Quest, is now available in single issue format for the first time! #1 of 2, 32 pgs, FC, $3.99
Lee: Wow, I really don’t remember this. Did anyone read it? Oh well, maybe it will be better the second time around. Well, not better but more noticeable. That said, with Jenkins writing it, and Ramos drawing it, it should be good.
Thomm: Man, I remember when Fables was the lone wolf putting out stories of these characters all living in a world, or worlds, together. Now we have Once Upon a Time and Grimm on TV, movies using the characters in this sort of non-Disney setting, and a plethora of comics. I’d like to know I’m getting something original before jumping into yet another. 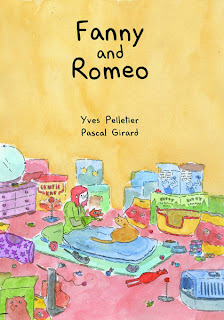 Conundrum Press
Fanny And Romeo GN by (w) Yves Pelletier (a/c) Pascal Girard
It's him or the cat in this charming collaboration between first time author (and renown Quebec comic actor) Yves Pelletier and the established artist Pascal Girard (winner of the Doug Wright Award for Bigfoot). Fanny wants to have children, and Fabien doesn't feel ready. Then a cat called Romeo comes into their lives. She falls in love, but he's allergic. A perfect blend of Pelletier's writing with Girard's beautiful watercolours, this story will warm the hearts of cat lovers and people lovers alike! 136 pgs, FC, 6.5x9.25, $20.00
Lee: As a cat person who is married to someone who is allergic to cats, I totally get this story. In fact, there are days when I wish I could trade the Wife for a cat. And some days the kids agree with me!
Thomm: Ha, I’m glad I’m not living in your household. If your wife actually reads what we write, you’re in the sh*t. As someone who neither likes cats nor people, this is not for me.