To wrap the review of this week I have 4 books from 4 different publishers. One of the best things about comics today is that while the big two still dominate the charts, many other publishers have a lot of great books coming out and often have the best books coming out. The highest sales do not mean it is the best book, just the most supported or best marketed book. 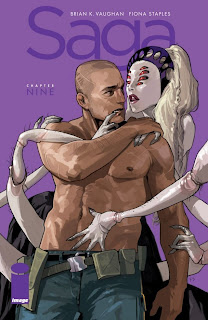 First up is Saga #9 from Image by Brian K. Vaughn and Fiona Staples. The success of this title has been nothing short of phenomenal. Vaughn’s name was a draw but the momentum of the series has been fantastic. I keep hearing about multiple print runs and sell outs. Heck Ebay is going nuts on this book apparently. This issue was a great spotlight on The Will the freelance assassin who is after Alana and Marko. It starts with a brief fantasy sequence, goes to Gwendolyn (Marko’s ex-girlfirend) joining with The Will. Next the two of them save the young girl who is a forced sex slave and then they begin the pursuit of Alana and Marko. The series is infused with a good story that focuses on the cast and has fun with creating a cast of alien creatures that would make the Star Wars bar scene envious. The one problem that I have with the series is remembering the names of the cast. As with many writers today they almost refuse to have the characters use each other’s name. I know it is not a natural speech pattern but when you follow as many books as I do you it is appreciated. At least I have Wikipedia (the made up encyclopedia) as most books have a page and I can refresh my memory of their names. A truly enjoyable series and one that deserves the accolades it has received. 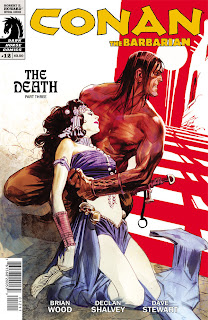 Next up is Dark Horse’s entry with Conan #12 by Brian Wood and DeClan Shalvey. This issue ended the current arc in the overall story of Conan’s adventures with the Queen of the Black Coast. It is a story that has plenty of action and gore but is a tragic tale of loss. Conan’s love for Belit is front and center as he will do anything to try and find a cure for the disease that is ravaging her and the crew. In the end she is saved but a heretofore unknown child dies as she was pregnant. The wall between Conan and Belit that forms at the end of this issue felt very real. Never has Conan had so much depth to his character and yet has maintained true to the spirit of the character. Dark Horse and Brian Wood continue to make Conan an enjoyable series. 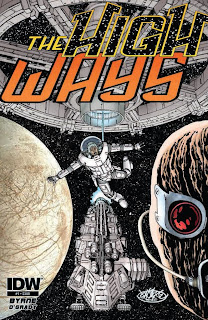 IDW bring us Highways #1 (of 4) by John Byrne. Byrne’s work has been uneven over the last few years and I know his popularity has been in decline for years. Byrne seems to bring some of this on himself, but this series has started out great. It feels like it maybe a classic science fiction/ horror type story. So many outer space stories love to add the monster and we see a possible one at the end of this issue. What I enjoyed about the story was how fast John established the setting. We are introduced to our three main cast members and set up that they are a crew for long haul jobs in outer space. A mystery is established, the characters are established (at least base line) and the series is good to go. 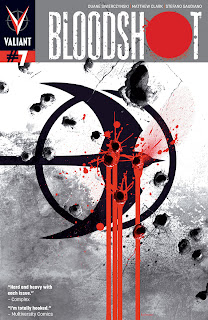 The last book is from Valiant comics. Bloodshot #7 by Duane Swierczynski, Matthew Clark and Stefano Guardino is another good issue in this series. It is a flashback sequence that apparently is going to tie in the Bloodshot story with the Harbinger series. It is nice to watch Valiant build their universe bit by bit. They pay homage to the old as they build the new. The planning and execution of what Valiant is doing speaks volumes to the management of the line. Executive Editor Warren Simons I’m sure is making adjustments as he goes along but he has strong creative teams and solid story telling on each book. In this issue we learn Bloodshot was being used to get back children who the government has found out have latent or active super powers, in other words harbingers. It was laid in nicely from the last issue. It is a total flashback type issue as it never even got back to the end of last issue and it still worked. I think Duane knows how to write well and seems especially versed in high octane action books. He is another writer that DC seems to no longer be associated with and that is a loss for DC.

It is amazing to me to see so many publishers doing great jobs with some of their books. All have hits and misses but I can count on Image, Dark Horse, IDW, Valiant, Dynamite, Boom and Oni to all have some titles that I want to get. If I ever give up 100% on the big two I still have tons of great stuff to read and enjoy.
Posted by Jim at Tuesday, January 22, 2013