I had to do some background search on this one.  When I finished reading I had the distinct feeling that there was a lot more to be said, so if there was more out there, I wanted to make a note.  Well, there's more, but not in comic form.

Another of my deeply discounted sale purchases at Cards, Comics and Collectibles, the name Harlan Ellison made it an easy buy.  You'd think the full title of Harlan Ellison's Phoenix Without Ashes might mean someone else wrote it, but Ellison did pen it.  It's just that the origin of the work was in 1973. 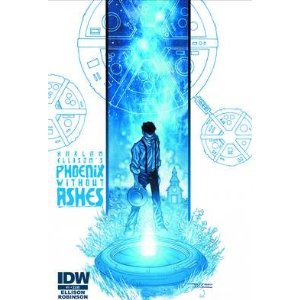 Published by IDW in 2010, this four issue mini-series, collected in one hard cover here, has the feel of a lot of sci-fi from the '70s.  The protagonist is named Devin.  He's a young man in love with Rachel, who's supposed to marry Devin's friend Garth, though Rachel and Garth are just friends.  Rachel loves Devin, too.  It's a family thing.  See, in the society they inhabit a community leader in communication with a god/computer determines who will marry who.  The community thinks the leader is getting his orders from the god/computer, but the leader is programming the decisions himself.  Devin's a troublemaker who questions authority, so he's not going to be allowed to marry his love.  It's all very Puritan, right down to how the people dress and the agrarian economy (not resembling Amish as I read on another site).

Trying to escape the authorities, Devin stumbles on a hatch and falls in.  Turns out his community is one of many spheres attached to a large ship called The ARK.  Devin finds that crew members on this ship are dead from some accident but a helpful computer that gives him some of the ship's history.  It's enough that he realizes that there are a lots of other spheres and that each one was set up to preserve a way of human life and culture when some calamity was imminent that would destroy the Earth.  Some hundreds of years ago the accident that killed the command crew occurred, leaving the ship without pilots.  Presumably, most of the other spheres' inhabitants have lost the knowledge that they're on a ship, just like Devin's community did.

Devin returns to his community, gets caught, and is supposed to be executed but escapes with Rachel, out of the sphere and back into the corridors of the ship.  Garth sees where they go and lets them escape.

Now, in 1973 Ellison was part of a production that created a Canadian Television show called Starlost.  Ellison won awards for his script of the pilot, but the production was such a mess that he left before the first episode, which altered his script quite a bit, aired.  The show ran for 16 episodes, so there's a lot more story out there, and if you want to search it, you can find a good bit of summary in Wikipedia.

Near as I can tell, only the part of the story represented by this collection is Ellison's work, so even though I enjoyed this book, there's nothing more out there to further the story that's the same level of quality.  Ellison has elements of The Crucible, 2001: A Space Odyssey, and Lost in Space wrapped in his story, but more than enough that's new and interesting that I'd like to see a lot more.  This is a starting point to a much larger story, though I don't know if Ellison has any intention of telling anything more.

As for the art, Alan Robinson is the man behind the high quality pictures here, with coloring by Kote Carvajal.  Robinson uses a heavy line and heavy inks.  In fact, if you like Gabriel Rodriguez's art in Locke & Key, you'll like Robinson's art here.  If art could be separated at birth, these two would qualify.
Posted by Thomm at Thursday, January 10, 2013