Each week breaks itself into parts and in order to get the write ups done I decided to give some review/impressions on whatever I read first. Often the order I read is almost random and I also use the Best Books ofthe Week post from Cosmic Comix as a guide since that post is up before I get my books. I have broken up everything else I got around to into two groups, the best of the books and the rest. These six are the rest of the group and Part 3 will be the best that I read.

Teen Titans #15 by Scott Lobdell plot, Fabian Nicieza script, Brett Booth and Norm Rapmund art was total trash. From the first page we the stereotypical impossible pose of a female super hero. This stuff is now routinely mocked and as an industry we should be a little more grown up about our portrayal of this stuff or at least have some anatomical idea of what can or cannot be done. Next is the over laying dialogue that took me a few pages to realize it was Red Robin as narrator. I know they are trying to make Tim Drake this uber-smart tactician who can predict all the actions but I find it a drain on the flow of the book as I had to read captains and then look at the panels. It does not make for an easy read. Next is the portrayal of Bunker, who I believe is a gay character. If I was gay I would be insulted by how he comes off as a stereotype in this comic. I dropped this book a few issues in and only got it again since it was “Death of the Family” book. Bunker comes off as flamboyantly gay and not as just a good strong character. Hell all the Titans are portrayed as caricatures and not characters. The confrontation with the Joker and Red Robin was also boring and not frightening. Yes, Red Robin is being outguessed by the Joker and the Titans are racing to find him. The Joker outsmarts them at every turn and has the Titans as his unwitting accomplices in his plan to turn the populace into people like him. Sadly Titans #16 is another part of the DOTF story line and I have decided to read all the chapters. The plus was Lobdell is only the plotter and maybe he is coming off this book. Nah, it doesn’t matter this book is trash, except for Tim Drake, who has been ruined by his new origin in the new DCU. 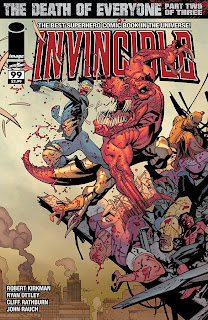 Let’s move onto Invincible #99 by Robert Kirkman, Ryan Ottley and Cliff Rathburn. How can you not love this book? Every single page is a splash page and the entire story is moved forward with an ease that belays description. While all splash pages the story is still effectively told and sets up issue #100.  Dinosaurus starts off saying how this is not the death of everyone, therefore giving lie to the name of the arc. Dinosaurus has a Ras As Ghul type of plan to make the world better but you need to thin the herd and cut back on all of those huge metropolises. The mass destruction goes against what Mark Grayson believes and so the two battle. Mark of course is also dealing with the fact that he supported Dinosaurus as he thought they could make a difference, but never with killing people and destroy cities. The cliff hanger ends with Mark about to have his head squeezed to death by Dinosaurus and now we await issue #100. Out and out great super hero comic book work and made even better since we know Kirkman can do anything since he owns the character. It makes what happens in the book actually mean something to the internal continuity of the characters. 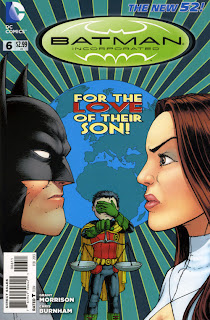 Another good book was Batman Incorporated #6 by Grant Morrison and Chris Burnham. This has been a fantastic series and the art by Burnham is incredible. His style is very distinctive and is perhaps close to Frank Quietly. His work lights up a book. In fact this issue it was easy to see the four pages that someone else did, I guess to ease a deadline burden. This book is obviously Grant Morrison’s final chapter in the magnum opus that his Batman work has become. It is a chapter in an ongoing story but still reads extremely well. Often Morrison fails to make each issue stand on its own, but with Batman Incorporated he has been hitting all the marks. This is a great story about the strangest mother and father battle over their son ever done. 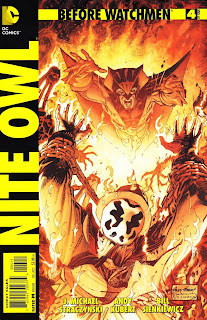 Before Watchmen Nite Owl #4 (of 4) by J. Michael Straczynski, Andy Kubert and Bill Sienkiewicz was a well done book. It has a touch of sadness as Joe Kubert died before finishing inking the series. I have read and commented myself, that this may be the bottom of the barrel as far as BW series have gone. The flip side of that is the bottom of the barrel is surprisingly close to the top. The series ends as Nite Owl, Rorschach and Twilight Lady bring down a mass murderer. At the end of the story Nite Owl and Roscharch are both brought into clearer definition of who they are and what makes up their character. I will want to re-read Watchmen after all the series are concluded. I will deeply miss the great stories that have been produced under this banner. It has been my favorite work published by DC by far.

The final two books for this post are a beginning and an ending. 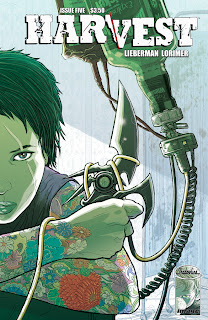 The ending is Harvest #5 (of 5) by AJ (Cowboy Ninja Viking) Lieberman and Colin Lorimer. I loved this series of a disgraced doctor becoming involved in organ harvesting for profit and then his exit from the operation and the battle to bring them down. I did not love that the series did not end and never explained his hallucination of a small boy who continued to urge him on. In fact they added a second child, a young girl to further push the doctor into action. What further sucks is the fact that the ending had nothing from the writer about what to expect next. Is there a second mini-series and if not what was your planned ending? If yes, when is it coming out? I have paid $17.50 for a part of the ride and was enjoying it until you pulled the plug without the ride being over. This is pure crap and piss poor marketing. I’m a grown up and can understand if it did not sell. If I can’t get to see what was planned at least tell me. Also let me know if there is a next part when it is planned to come out. 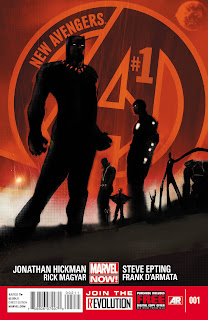 The last book is a new series, Black Panther #1 New Avengers #1 by Jonathan (I craft the longest stories ever) Hickman, Steve Epting and Rick Magyar (who got the smallest font size ever for an inker credit). The book is about the Black Panther stumbling across a cosmic menace that will destroy the Earth and maybe the Universe. He reluctantly pulls together the Illuminati of the MU, to which he was opposed. The problem I had was the Panther exhibits all of these powers I never knew he had. Apparently in the FF book by Hickman the Panther is now King of Necropolis or whatever and has some new mystic relationship with all the dead ancestors from before and I guess this grants him new powers. It was a not a reader friendly first issue unless you are a devout Hickman fan. Also Hickman has great concepts and ideas, but his dragged out story telling style means a 12 or more issue buy in to get to the point. Hickman does not pace his books well. Hickman is the king of enticing me with some interesting concepts but his books can be obtuse as Grant Morrison or Brian Azzarello. over 100 plus titles a month it needs to be a little more straight forward and cleaner for me to sing its praises.