Batman and Robin #1 – A Review 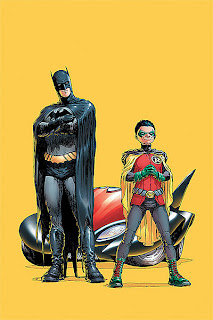 
WOW. What a great comic book. You know when I said it looked like Irredeemable had won best new series of 2009 already, well if you count this as a new series this book started off with a bang and could be the series of 2009.

I have campaigned for Dick Grayson to be Batman for years. Not because I don’t like Bruce as Batman, but because the only way to really being in some life to a character is to let someone else be the character. A flying Batmobile, sky diving from a hovering Batmobile, moving the operations back into the city, a Robin more cocksure of himself, a Batman whose has suffered lose but also was raised with love; can’t be Bruce and Tim, but it can be Dick and Damian.

I enjoyed this book like I have not enjoyed a Batman book in forever and very few comics are hitting this mark. We jump right into Batman and Robin going after the bad guys and a mystery is immediately presented to them as the payoff for the crime was being made in dominoes.

We then cut and see the interplay between Alfred, Dick and Damian and the new dynamic is just great. Dick is the cool and confident one trying to tame the brash and unbridled Damian. Alfred is appreciated by Dick, where he was barely acknowledged by Bruce. Alfred is a servant to Damian where he was a friend and semi-father figure to Dick and Tim.

Next we see a new group of villains being introduced and they are appropriately enough the “Circus of the Strange”. An odd and gruesome bunch and effectively creepy and nasty enough to be a real threat. How appropriate for Dick to fight a circus his first time out as Batman.

The art, ah the art is Frank Quietly and Alex Sinclair on colors and again – WOW. From the double page spread of a flying Batmobile, to the full page spread of Dick and Damian jumping from the hovering Batmobile into the Bat signal, to a car that splashes in the water that forms the sound effect, to burning a doll mask onto a person and to quiet moments between the boys and Alfred, Quietly looks beautiful. The smugness of Damian and the quiet thoughtfulness of Dick come through via body language and expression. I wish Frank was doing the book all the time, but an arc here and there is fine by me. Art and color blend perfectly on each page.

This book has me excited for the Bat universe like I have not been since Denny O’Neil and Neal Adams reshaped the Bat. Back in the sixties due to the success of the Batman TV show Batman and Robin were turned into a campy echo of that show. Denny and Neal turned Batman back into a detective and a creature of the night. Those stories have essentially set the tone for what Batman has been for the last 30 plus years. Soft reboots aside no one has really done anything new with Batman since (maybe Batman Year One by Miller, but that was not a radical change). Now with Bruce out of the way it all feels new again and yet it is still Batman and Robin.

I hope DC is smart enough to realize that leaving Dick as Batman for a year will not be enough. When Bruce comes back (and they should make it longer then a year) maybe he will take a back seat and be more of a behind the scenes guy and let his adopted and real son take over the family business like it has always been predicted they would. The sixties were full of stories of Bruce’s son being Robin and Dick being Batman, some things are meant to be.

Also how are going to keep them down on the farm after they have seen Paris, France. I believe the actual expression (slightly different) was talking about WWI, but the same applies here. When Batman Prodigal son was being done it was just Nightwing in the Bat costume, because Bruce was alive and coming back, just recovering. Now it is Dick being Batman, not waiting for Bruce to come back, it is Dick making Batman into his own creature. So once that conversion is complete, how do you make Dick go back to being Nightwing again? I say, you don’t and Bruce takes a different role. Heck we can always do books like Matt Wagner’s brilliant work a few years ago about Bruce’s early years.

Back to this book, even if you were not fond of Morrison run before, do not miss this book. It promises to be a wonderful tale of two people thrown together by circumstances becoming a team and becoming the legends, while making their own.

Overall Grade A+ - A glorious beginning to what will hopefully be a new era for Batman.
Posted by Jim at Wednesday, June 03, 2009