Recently we have seen four books from four different publishers take a look at what happens when a super hero has a problem. Each one could be considered similar to the other, but each one takes its own viewpoint on the idea. The net result is we have four books that are thematically in the same ballpark, but are all unique and so far each shows great promise to be excellent series. The books are The Mighty by DC, Irredeemable by BOOM, The Life and Times of Savior 28 by IDW and Absolution by Avatar. 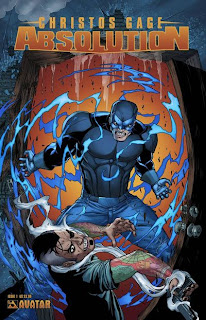 Going in reverse order I want to look at each one and the core theme the book seems to be presenting. In Absolution from Avatar we have a hero who is a government sponsored type. He is not a vigilante and in fact he enjoys a relationship with a homicide detective and has what appears to be a very happy life. The problem is that he can no longer tolerate what he has seen and had to deal with, so he is quietly killing off the people who the law can’t touch or who have gotten away with crimes, maybe on a technicality. So far we only have the zero issue the character and a few interviews and an after word by Christos Gage in the book to give us any insight into the character. Gage has stated this is a character who is probably suffering from a post traumatic stress situation after seeing what he has seen. He is basing this off the knowledge that New York rotates police officers off the SVU squad every two years to allow them a mental break from the horrors they have to deal with.

Whether by intent or not I’m also seeing other elements in this story already. First he is the hero that as readers we often wish the good guys would be. As much as we do not want Batman to kill the Joker, it has gotten to the point where I would pull the trigger to just stop him from ever doing it again. (A great Elseworld 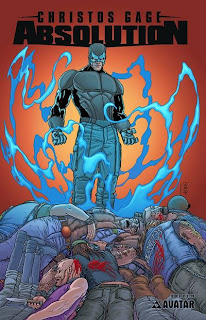 story there, where Batman does kill him and the repercussions that has – Does it make the world a better place or create worse things? - tons of story potential.) Of course if the character takes it too far than the character goes from someone breaking the rules to being the Vigilante or the Punisher. Killing is not just an option, but becomes the only option.

I like all of the story potential in this book. How will his girl friend the homicide detective deal with tracking down the serial killer who is her boy friend? How does the government deal with their own sanctioned super hero who is a killer? How much will is there to capture and prosecute a man, especially if everyone he kills is truly evil? How does the character rationalize going over the line in his mind? How far will he take it? Regardless of the legality, is what he is doing right? Gage has crafted a story that is full of potential and my hope is that the book comes to a resolution and does not leave it too open for anything more. The main character needs to caught or at least found out to end the series. I hope he is not killed as that is the easy way out, leaving it open for another arc is fine as long as this story answers some questions and brings us to a resolution point. Ending too neatly takes away from any real world feel that the story has generated for us.

Absolution is solicited as a six issue mini-series with a zero issue, so we should get a complete story of at least how the character went from point A to be B and what the repercussions of that decision has for him. 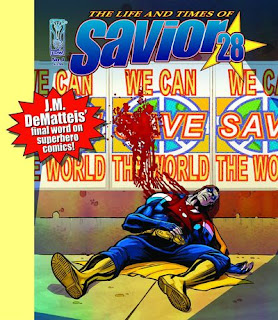 Next up is the Life and Times of Savior 28 from IDW. It has become a cliché to kill off the main character at the end of the first issue, but the end of the story is the beginning for this book. I think it was a big gamble to kill Savior 28 right away, but it is working for this book as we are learning exactly what happened to Savior 28 as each issue unfolds. The story is being told by the side kick of Savior 28 and it is a fascinating tale of how someone’s perceptions can change over time. Savior 28 is a Superman type power level, but also seemed to play the role of Captain America in this story. Savior 28 was the big hero of WWII and then lived on until today. As he had become increasingly disenchanted with the status quo the government decided he needed to be eliminated and his old sidekick agreed and killed the invulnerable man.

As the veil is being pulled back we are learning the Savior 28 was truly a decent person who was trying to do the right thing. One time when he saw a concentration camp he lost his mind and was catatonic for a couple of years. This is the first sign that Savior 28 can only deal with so much and then it overwhelms him. We have seen Savior 28 try to kill himself, walk away from the super hero fights, try to start a political movement for world peace and is being recruited by an old enemy to come work with her.

It is a portrait of a man with incredible power who was caught up in being a super hero. Whe 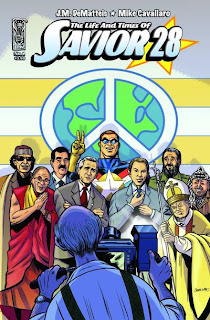 n the real world intruded the first time he shut down. As time progresses he starts to see the hypocrisy in his government and many other things (I know that feeling well). The problem is that he is still trying to find a way to use all of this power he has for more then just beating up a super villain. It is the classic conundrum that Elliot Maggin (decades again) tried to write about with Superman. You have all of this power, but you cannot change the world, human nature is what human nature is and super strength cannot change a mind (which begs for the story when Xavier tries to fix the world).

So this appears to be a story of disillusionment and a simple man’s struggle to try and find his place again in the world. Due to his powers and fame he can’t seem to find it, but his government got worried he could bring about their demise. Savior 28 is also portrayed as a good man, who has obvious depression and other mental health issues. I have read that this is a five issue limited series and as Savior 28 is dead should come to a definitive conclusion. Of course they could say he is still alive and do a follow up series or do a mini about his super hero life, but that would be a weak follow-up. Still JM Dematteis is writing a great story.
Part 2 Will Be Posted Tomorrow at 4PM NY TIME
Posted by Jim at Monday, June 15, 2009