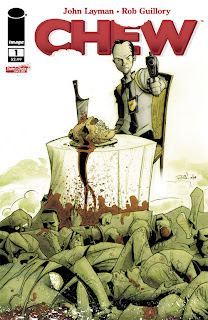 So you have this odd idea for a comic book and you decide to roll the dice and put it out on the market place. To be fair the creators do not have any “star” status in the comic field but they are known. The premise is very different and holds promise, but could be off-putting to many fans. Finally after putting in all the blood, sweat and tears to get a book from concept to execution the big day comes and your comic is released. Chew #1 hits the stands the same week a new Grant Morrison and Frank Quietly book hits Batman and Robin #1. What a bummer. I loved Batman and Robin #1, but you know what in its own way Chew #1 was just as good.

The book starts off with telling us immediately about Tony Chu. Given where the book goes this was a great choice and done in three panels. Tony Chu receives psychic impressions from anything he eats except beets. From what tree an apple comes from to what happen to the cow to what you have been doing if he happens to consume part of you.

Next we join with Tony and his partner. They are police detectives on a stakeout watching a place that you think is a drug dealing operation, but in fact it is a Chicken Speak Easy as the government has outlawed chicken and all fowls due to bird flu. Just as they are about to bust someone the FDA steps in and tell them to back off as they have a major player in the case. As a consolation to the two detectives he tells them to go into the restaurant and have a chicken dinner on the Feds. Inside the restaurant Tony gets chicken soup that a sous-chef had cut his finger preparing. The psychic impression he gets about the guy is not good and the craziness starts from there.

At the end of the day the FDA wants Tony to work for them as a special agent and it looks like Tony’s life has just taken a radical turn where his abilities are going to be put into use.

The first issue was basically building a foundation to get us to where the adventures are going to begin. Instead of being tons of exposition and a laborious ride to get through to the end, it was a great story in and of itself. It could have well been a four issue mini-series to get us from point A to B as many books have tried to do, instead we get a fast paced, highly entertaining adventure of Tony Chu. Now I’m already hooked on this book and I’m looking forward to issue #2.

I have complained often about the three issue mini-series from Image and Shadowline especially, where they only start a story and never give us a complete story. I know that it is a trial balloon to see if the sales will warrant doing another mini-series or an ongoing, but I always feel like a chump for wasting three months to get a partial story and no sense of closure. This book does it right, by first being bold enough to launch as an ongoing and giving us the full value for our buck. The first issue is what too many creators would have dragged out over three or four issues to introduce their character, we get that and more in one and now are awaiting Tony’s first assignment with the FDA.

Layman has crafted a book that is full of tongue in cheek humor and bizarre situations, yet manages to still tell a straight story that has you interested in the character. You feel for Tony and want to know more about him at the same time you are laughing that he has to mainly eat beets to not have the psychic impressions. An impressive first issue and gives you the feeling that Layman has a rough outline at the very least where this book is going for the next couple of years.

The art is equally impressive. Just as the book is laced with humor and still tells a great straight story, the art is a cartoon type style akin to Duncan Rouleau and others in that style category, but still tells a great story and maintains a sense of realism. When a book reads well, you know the artist understands how to tell a story and Rob Guillory is a great story teller. The story moves easily from page to page and you are never lost and never wondering what character is who. At the same time the expressions, the dramatic moments are well framed and Guillory has the entire arsenal in his repertoire.

Chew is another must read and a series that deserves your attention and support. Plus it lends it self to tons of great puns and since I have always enjoyed puns this book will be great fun to review.

A book that is filling.
You can chew this book, but you won’t spit it out.
Choo, choo, but don’t jump off this train.
Chewie watch out, there is a new Chu in town.
I ate this book up.
A tasty morsel that you can chew on for hours.

Overall Grade A – A fantastic start for a new series, get in on the ground floor or be left with nothing to chew on.