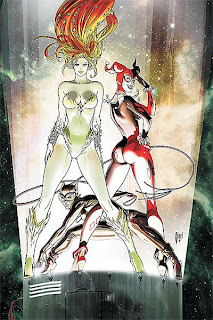 Before I get into the review of this book (which was a good start), I want to talk about the re-launch of the Bat-verse from DC. It has been nothing short of stupendous. DC has had a horrible track record with so many books. Batman and the Outsiders was an incredible miss, Wonder Woman was horrendous and is still trying to recover, Flash first with Bart and then with Wally was atrocious for the most part and is now being redone with Flash: Rebirth. DC has so many great characters and fortunately DC has not destroyed my fondness for them like Marvel has with some of their characters, but DC has been very weak with many re-launches. So it was with fear and anticipation that I waited for this month. I have almost had a campaign going on for Dick Grayson to be Batman (and not just his replacement while Bruce got better), so this was the realization of something I felt long overdue. It worked. It has been a truly reinvigorating experience. From Batman & Robin to Streets of Gotham to Detective and every other book, every single book has been at least good and most have been very good or excellent. Also it appears to be planned so that every week we have at least one Batman title on the stands. Congratulations DC, you have made one fan very happy.

Now I know that was one long prelude to get to my review of Gotham City Sirens. I would like to say that I saved the best for last, but that would be a lie, but I did save the oddest premise for last. I can’t help but to see this as the replacement book for Birds of Prey and instead of good guys we get the semi-bad girl team-up. I wonder if Paul Dini pitched this idea or if Dan Didio wanted some sort of book like this and they kicked stuff around and came up with this or what. Since this odd grouping came out of the blue, Paul had to focus on the why. Why would they team-up?

From that standpoint I think Paul found enough of a little hook to make it work. It is a thin premise to be sure and I’m not quite sure it all hangs together, but at least there is a logical reason. The book starts with Selina recounting all that has happened to her lately and she still does not feel 100%. It is because of her fatigue that she is getting beaten up by a third rate hood and Ivy comes around to her rescue. Catwoman is taking to Ivy and Harley happens to be living with Ivy. Now since Harley is nuts, her wanting to live with Ivy makes as much sense as anything with Harley. In some ways that makes Harley a fun character to read and I have to guess to write also. Poison Ivy is suspicious of what is going on with Selina and tracks down Zatanna to find out what has happened to Catwoman. She discovers that Selina is shaken up and has a lack of confidence since she had her heart taken out of her by Hush (bound to have a major impact on anybody). So after trouncing the bad guy, they leave the Riddler (don’t ask) to figure out what happened and they buy a nice hideout together. Ivy abruptly drugs Catwoman to ask about Batman’s secret identity and the issue ends. Of course Batman has done something to protect his identity with Selina, so that will be quickly resolved next issue. I enjoyed the story and the interplay between the characters; I’m just not sure I’m buying what they are selling yet. As Paul Dini has been doing great work with DC lately I will trust him to keep this book as a good one.

The artwork took a little while to grow on me. A personal preference would have been to get more of a good girl artist, but perhaps Mr. March will grow into the role. What Guillem can do is draw and layout a comic book. From his wonderful opening splash page to the final panel of us seeing through Selina’s eyes he did a good job. He has and exaggerated style when it comes to action and people get stretched somewhat out of proportion during the fight scenes, but I think he is trying to emphasize the action. Some panels he convinced me that he was the artist for the job and other panels I still have reservations. All in all the artwork was a plus.

Overall Grade B – A good start to a book that has the oddest premise of all of the books in the Batverse.
Posted by Jim at Thursday, June 25, 2009