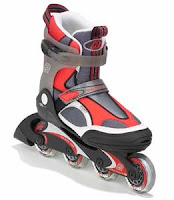 So, I went out rollerblading at lunch today. Nothing makes you feel more alive than rollerblading for 3 miles in 85 degree temperatures and 100% humidity.

Anyway, as I was going I realized that the ipod was set to Prince. Granted it was the Greatest Hits, but still the purple wonder Prince. Which begs the obvious question, is it too girly to listen to Prince while working out? Is it wrong to sing "Raspberry Beret" while traveling at high speeds?

Is it mitigated by doing sprints to Killers, "Somebody Told Me" and cool down to Kinks "(Wish I Could Fly Like) Superman"?

Or should I stick to NiN, "Hand that Feeds"?

Occasionally, I wonder if I have too much time on my hands if I'm wondering about my ipod track list. Oh well, more pointless musing later...
Posted by Lee at Wednesday, June 10, 2009