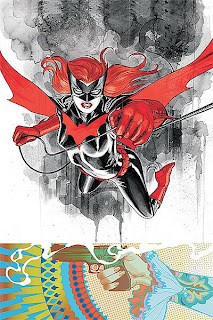 There are a lot of things to like about this new series and first and foremost I like that DC took Detective Comics and gave it to a different character as the star. Sure it is Batwoman and therefore automatically part of the Batverse, but Kate Kane is essentially still pretty much a blank slate. I also like that DC respects the numbering of books and we did not get a new #1, but instead have #854. Additionally I think it was an excellent choice to give us the back-up feature as the Question, since Greg Rucka has been shepherding these characters in the DCU since he introduced both of them in 52. Finally what an artist to start out this series with JH Williams III is an amazing artist and is unlike anyone else in the field. For anyone who thinks DC does not have top artistic talent on their side, they need to look at this book.

As comics are a visual medium, I have to give it to JH Williams III as he did an outstanding job this issue, From the dark heavily inked scenes when it was Batwoman, to the light lined and less shaded work when she was Kate, the book had a distinctive feel for both halves of the character and by one artist. Dave Stewart matched Williams work with coloring to keep both sides perfect. Add into that JH’s innovative layouts and page design and you have a book that is dynamic and draws you in right from the beginning. Not since Neal Adams has an artist managed to do such innovative page designs and not hurt the storytelling or flow of the book. Many artists will try different layouts and such, but they usually screw up how the hell you are supposed to read the page. Instead of being innovative they hurt the book and the storytelling. Mr. Williams designs work beautifully. Your eye flows from panel to panel and the design of the page enhances the story telling and heightens dramatic moments. His realistic style is further enhanced by his ability to put his characters emotions across. He does it with expressions, but he does it with body language as good as anyone else in the business. There are panels to remember throughout the book, but two panels show his ability with body language very well and they are Batwoman when she sees Batman and Kate when she gets dumped by her girl friend.

Greg Rucka is a writer that I have learned to love over the years and I have gone backwards and read Queen and Country and Whiteout over the last couple of years. When he did not sign up with DC for an exclusive I was worried, but boy is he back with DC big time and making some waves in the DCU again. This book has to be his special baby as he has been the only writer for Batwoman and for Rene Montoya as the Question. Both stories were well done.

With Batwoman Greg dives right into the story of Batwoman going after the 13 Covens in Gotham that are awaiting the new leader of the Crime Religion. This is a story that has been flowing in and out of a few books over the last couple of years. Greg rewards readers who know of it and brings new readers up to speed at the same time. The reveal of the new head of the religion was very cool and the cliff hanger ending was nice as Greg flipped a comic convention on its head by having the new bad person appears to be getting killed at the end instead of the hero. Plus the new heavy is a good opposite to Batwoman.

Greg’s character building parts of the story were also well done. While we all know Kate is a lesbian, Greg plays her getting dumped as it should be done, which is like any relationship. Straight or gay, relationships are relationships and Kate’s new girl friend thinks Kate is fooling around as it obvious she is out till all hours of the night. So she tells her to call her when she can grow up and that is when we get JH Williams III great picture where her body language tells the whole story of how Kate feels. Then we get scenes with Kate and her Dad and are starting to learn a lot more about whom Kate is and what is her back story. The subtle hints dropped in this issue have me wanting a six part mini-series of her origin.

The Question story was also well done, but suffered from a lack of space. I don’t know if the plan is always to have only eight pages or expand it to ten, but eight pages just got the story started. Still Greg has set up Rene’s Question as someone who is trying to help people get answers to their (dare I say it) questions. This issue a young man’s sister never made it to the states and the Question starts her search. What she finds does not look good as it seems to be a pornography ring or worse.

Cully Hamner provides the artwork for this series. Cully’s style has grown on me over the years, but the problem is that he stands as a very different kind of artist against Williams work in the front of the book and for me it suffers in comparison. That comparison is not fair as Cully is every bit as professional of an artist as anyone and he can convey the story very well, but not as good as JH in my opinion.

This back-up is a solid addition to this book and rounds out a great package from DC.
Posted by Jim at Wednesday, June 24, 2009