Remember my opening on Monday about the super stupendous colossal extra special unbelievable jaw dropping earth shaking cross-over we were having this week, well we had a publishing schedule issue and just like the big publishers we are publishing parts out of sequence.
Jim: In the odd timing of things I have just finished doing our Image review post for July and I’m now starting the review of August. Lee made a salient point last time (it has to happen occasionally) that Image had better material coming out when Larsen was running the company. Maybe Eric should get back into a more active role, because Image is starting to look like a weak publisher.
Lee: I understand diversifying your offerings but Image seems to be going about it in a haphazard way. Personally, it appears to be weakening the Image brand overall and not improving it. Stick to the core business people! Image isn’t even doing that very well these days. 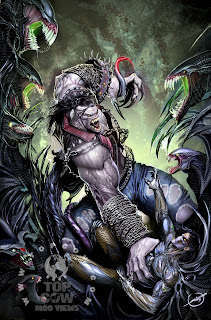 THE DARKNESS/PITT #1 (of 3)
story PAUL JENKINS art DALE KEOWN covers DALE KEOWN & ERIC BASALDUA AUGUST 26 / 32 PAGES / FC$2.99
Dale Keown's classic hero Pitt makes his return to comics! What else do you need to know? When Tim and Pitt's mission to track down those infected by an alien virus brings them to Jackie's stomping ground in New York, they are invariably drawn together. Both attract the unwanted attention of the Federal Government and mayhem ensues!The crossover reunites The Darkness writer Paul Jenkins (Captain America, Mythos) and Pitt creator Dale Keown (Hulk: The End) and features two covers by series artist Keown and a variant cover by Eric Basaldua (Witchblade Annual).

Jim: good luck with this book. Pitt has been nothing from my perspective and I never read the Darkness and oh by the way the 3 issue mini-series which seems to be Image’s norm and that means an incomplete story.
Lee: Unfortunately I have multiple copies of Pitt #1 sitting in long boxes that I can read if I need more Pitt. This is assuming older Fanboys have some sentimentality left for the character. I might… and that’s a big might… get the trade if it ever comes out because I like Keown’s art. But even that’s a long shot. 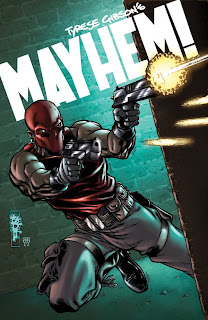 TYRESE GIBSON'S MAYHEM #1 (of 3)
story TYRESE GIBSON, MIKE LE & WILLIAM WILSON art & cover TONE RODRIGUEZ AUGUST 5 / 32 PAGES / FC$2.99
Los Angeles, the City of Fallen Angels, is a city swept up by a brutal crime wave led by a kingpin known only as Big X. The body count builds as only one man can stop the flow of drugs and violence, only one man can stop Big X. He is the embodiment of vengeance and raw justice, the faceless arm of those who cannot defend themselves. He is known as Mayhem, and along with his sexy but deadly partner Malice, their goal is to dismantle the kingpin's organization, unravel the dark secret that mysteriously links them to Big X, and save the city they grew up in.
Jim: Maybe it is my more austere budget approach, but this is another book that does nothing to make me sit and up and take notice of it or even want to think about ordering it. Also it is again a 3 issue trial balloon; float that baby to someone else.
Lee: Are you sure that Tyrese, the world famous rapper & actor, isn’t a bigger selling point for you? Because I know so many of these actors turned superhero books sell like hot cakes. I’ll pass. 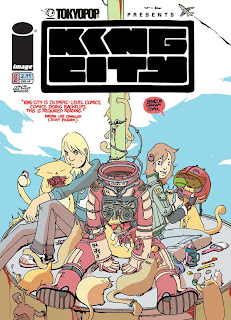 KING CITY #1
story BRANDON GRAHAM art & cover BRANDON GRAHAM AUGUST 19 / 32 PAGES, BW$2.99
Pete falls in love with an alien he's forced to betray...Anna watches her boyfriend literally turn into the drug he's addicted to...and Joe has a cat that can become any tool or weapon.
It's all just another day in King City, where mystery is down every alley...and weirdness is crawling through your window.
From critically acclaimed comics vet BRANDON GRAHAM comes a comic unlike any you have ever read!
Jim: This sounds fun, but I’m going to want to glance at it on the stands before making any commitment.
Lee: This is a very weird listing because it’s appears to be a reprint of Graham’s Tokyopop material. I think you can still get that, more pages and as complete a story as King City ever was instead of this. I’ve read the original, it was good for ¾ of a book and then crashed and burned at the end. This is the good stuff so it’s worth buying. 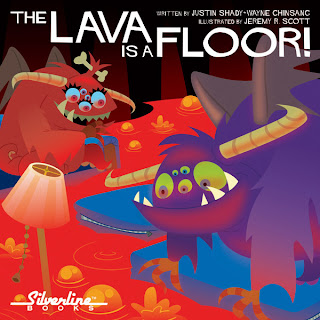 THE LAVA IS A FLOOR! HC story JUSTIN SHADY art & cover JEREMY R. SCOTT AUGUST 5 / 32 PAGES / FC $12.99
THE MAGIC OF A MONSTROUS IMAGINATION Two monster children dig deep into their imaginations to become the weirdest creatures of all: humans! The brother and sister duo Blarg and Clarg live in a cave in the crater of a live volcano, playing and pretending all day long. To them, their lava-filled bedroom is a plush carpeted floor, their dinner of critters and grubs a tasty meal of spaghetti and meatballs. While what they pretend may be ordinary to humans, it's fantastical and exotic to them!

TIMOTHY AND THE TRANSGALACTIC TOWEL GN story MIKE BULLOCK art MICHAEL METCALF cover MANNY TREMBLEY AUGUST 26 112 PAGES / FC$16.99Timothy is a young boy being raised by his single father. His dad always has to go away on long business trips, but makes sure to bring home a special gift each time. His latest trip was to Hawaii, and he brought home a multi-colored beach towel. Timothy thinks the towel kind of sucks, until he discovers it can transport him to other worlds and times! In this, the first of a projected series, Timothy is transported into the heart of an inter-galactic war!
This is a Silverline Book by the award-winning author and illustrator of "Lions, Tigers & Bears."
Jim: I’m passing on these, but these seem to be children books and should be targeted for book stores and not necessarily for direct market comic shops.
Lee: I would think the kiddie book market is absolutely brutal. I’m surprised Image has targeted that as a growth point. Oh well, my kids are past this too so I will pass. Maybe you should get it for the Grandkids! 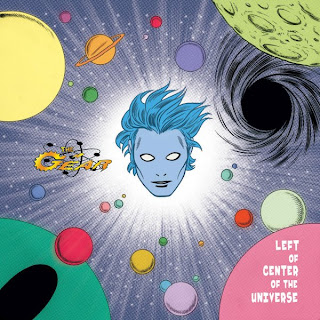 HE GEAR: LEFT OF CENTER OF THE UNIVERSE CD AUGUST 12 $12.99 S&N $24.99
This album takes off through hyperspace from where the previous album from The Gear left off! Imagine Pink Floyd and Alice Cooper melding with The Beatles and Bowie after gorging on blackberry cobbler then taking a time machine into the year 2010 and you might get some idea of what to expect from these sonic gems. Includes the modern classic "Nasty Snack" with special guest-star Courtney Taylor of The Dandy Warhols sitting in. This special limited edition CD includes special die-cut packaging with rotating artwork. Check out aaapop.com for free previews where you can get a taste of the psychedelic pop of the future! GINCHY!
"Really cool- Phantasmagoria"--Courtney Taylor-Taylor of THE DANDY WARHOLS
Jim: CDs, really! Talk about desperation and if you are looking for a product that is dying out faster then print, than you have found it with CDs.
Lee: I’m with Jim! CD’s? Seriously? I disagree they are dying faster than print but what makes Image think they will be good at this? They are a publishing house, not a record label. There are some very, very poor decisions being made at Image these days.

TED MCKEEVER LIBRARY COLLECTOR'S SLIPCASE AUGUST 19 $12.99
Image Comics is proud to offer this handsome collector's slipcase for your TED MCKEEVER LIBRARY hardcovers!
This item is specifically designed to preserve and display all three volumes of the TED MCKEEVER LIBRARY which include BOOK ONE: TRANSIT, BOOK TWO: EDDY CURRENT and BOOK THREE: METROPOL.
Black with gold printing, this one of a kind, quality product will enhance any bookcase and make a great addition to the aficionado's Library collection.
Jim: Not a comic, not a children’s book, not a CD, not a hard cover, not a trade, no just a slip cover to collect your other books. LAME! This is what passes for Image’s solicitations. Soon it will be conversations like, Do you remember when Image comics were around?
Lee: OOOHHHH I’m gonna get killed for this. I was hoping you wouldn’t pick it but… I think it’s cool. $13 is pricey for a slipcase but I have all the original books. A slipcase would make the grouping look great. OH OH OH! I think I’m gonna get it. 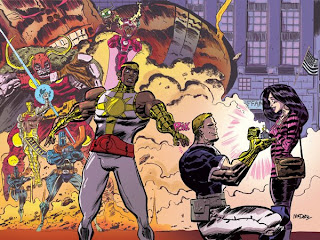 JERSEY GODS, VOL.1: I'D LIVE AND I'D DIE FOR YOU TP story GLEN BRUNSWICK art & cover DAN MCDAID AUGUST 5 / 144 PAGES / FC$14.99
You're a fun-loving, high-maintenance girl that grew up in a New Jersey suburb. You live close enough to New York City to want the clothes and the cosmopolitan lifestyle, but you're not brave enough to move away from you over protective parents. What's a girl to do? If you're Zoe, you marry the first God of War that crash lands in town during a life or death struggle with his evil adversary! But, what happens when even an all-powerful God can't exactly measure up to your elevated expectations? The trade paperback collects the first five issues, plus alternate covers by DARWYN COOKE, PAUL POPE, MIKE ALLRED and ERIK LARSEN, and a special "art of Jersey Gods" section featuring new, unseen artwork by series regular artist DAN McDAID.
Collects JERSEY GODS #1-5
Lee: I didn’t get this when it started but I’m jumping on the bandwagon now! Yahoo, Image got this right. Ok, so I picked this just to point out that Image does have SOME good books. Like Proof. Ever read that? That’s still very good.
Jim: Proof, yeah I have heard of that. Proof and Jersey Gods both great books, along with Four Eyes and Chew.
AND FINALLY 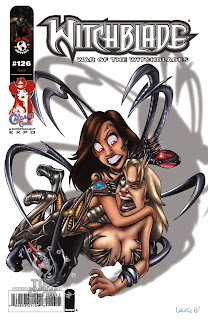 WITCHBLADE #126
CALGARY COMIC & ENTERTAINMENT EXPO VARIANT cover LAURIE B! SIGNED
32 PAGES / FC / $10.00
Don't miss your chance to get this unique cute take on Sara and Dani's epic struggle previously available only at Calgary Comic & Entertainment Expo! Quantities are limited, allocations may occur.
Lee: I couldn’t agree with the hype for this book more. What a “unique and cute” cover. It looks like she fell on a pair of water balloons. Cutesy at it’s best!
Jim: LOL – how is Witchblade still surviving?

Jim: Pathetic. Image better pray that Kirkman does not go off on is own or they are through as a viable publisher.
Lee: Yep. Image is in a slump. I think they are trying to go to a Dark Horse model and offer more varied things. The problem is that Image’s selections for new material just make no sense. Oh well.
Posted by Jim at Wednesday, June 10, 2009