Persepolis: The Story of a Childhood - Review 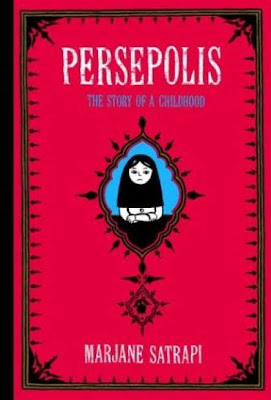 A month or so ago Lee sent me a box of books. Among some items of questionable (but humorous) taste was a rare gem. The first book of Marjane Satrapi's "Persepolis" was both a unique experience and a beautifully told story.


I'd like to start off this review by admitting my ignorance as far as much of Iran's history is concerned. While Iran has been a frequent topic in the news for many years it wasn't a country that was given much attention in any of my history classes. I do know quite a bit about ancient Persian history but much of post/modern Iranian history was unknown to me when I began to read Persepolis. Not only did Persepolis give me a broader historical perspective but it also sparked enough of my interest to encourage me to learn more about Iran on my own. When I can read a comic and bring away new knowledge and understanding I know that I have found a story worth passing on. In fact I've already ordered a copy of Persepolis as a gift for someone.


Marjane Satrapi both wrote and illustrated her comic book memoir. The simplistic design is accessible with it's block paneling and basic black and white contrasts. The really impressive aspect to Satrapi's art is her ability to convey complex emotions with very little line work. While her art isn't something I'd buy seperately it does the job of telling the story and telling it well. In fact the stark colors and lines especially emphasize the dramatic and harsh scenes that play such a big role in the plot. More detail would detract from the tale being told. Another benefit of symplistic art styles is that it allows the readers to more easily place themselves in the roles of the characters. The is especially effective in telling an emotional story such as Persepolis.


The story itself starts out with a brief introduction that sets the scene with information about Iranian history. Satrapi then tells us her purpose in writing her memoir: "I believe that an entire nation should not be judged by the wrongdoings of a few extremists." She then goes on to say that she doesn't want the Iranians who have suffered to be forgotten.


The story is of a young Mari growing up in Iran. In 1980 she was 10 years old. The story follows her life until she is sent away at age 14 to live in Austria with friends of the family. One of my favorite parts of the story was how much we see Mari change and grow. The reader is allowed to share in Mari's life as her dreams grow and change. I love when she's young and wants more than anything to become a prophet. She's resolute in her desire and endearing as well. Mari's struggle with "the veil" is a central theme in the story. When the story starts out Mari has to wear a veil at school. She explains that only the year before she hadn't worn a veil and she didn't understand the reasons behind it. Her mother even goes to protests against wearing a veil. You can follow the different time periods in the book by paying attention to whether or not Mari is wearing a veil in public.


I think the thing that really drew me to this book was the raw honesty displayed by the author. She doesn't apologize for anyone's actions she just shows her readers what her world was like and how Mari reacted to it. Seeing the ups and downs of a nation through the eyes of a child is a powerful way of gaining new perspective. Satrapi portrays this perspective masterfully.


Even if you don't think you'd find the story of a young Iranian girl of interest I'd still encourage you to give this book a chance. If you enjoy it there is a follow up book (Persepolis: The Story of a Return) which I recently began reading. I'll probably put up a review for the second book as well.