I was really pressed to have a best book this week and I know my thought process is a best book can just be the one that is forced to the top by competition, but really nothing was in the best category, so Batman from a pure interest level made it to the top of the list. Oddly enough even with that being said I enjoyed a lot of books this week and thought we had some strong entries in some good series and I threw that into my other category. If not for that category I would have moved some books into the best, but I feel this is a more honest appraisal. 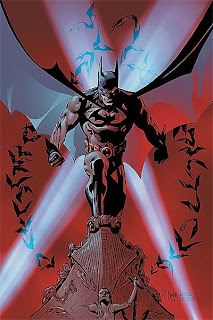 Batman #687 - Writer Judd Winick, Pencils Ed Benes, Inks Rob Hunter,Colors Ian Hannin & JD Smith. This was an odd book. It was sort of a bridge between the ending of Battle for the Cowl (before Dick took over being Batman) and the start of Batman and Robin. My initial impression of the book was that I thought it was a little ordinary, but since it has been a few hours since I have read it, I think it was a good first issue for a book that will apparently focus on the solo adventures of Dick Grayson as Batman. The problem I had with the story structure was I found myself trying to put it into a place and time and it was not a seamless fit with Battle for the Cowl. It was also a little strange it how it portrayed the sequence of events and an almost random visit from Superman and Wonder Woman. What made it work was that you could almost sense this issue was Judd trying to find Dick’s voice as he takes over being Batman. I still think it was mistake to have Judd do this book as Peter Tomasi had a perfect Dick Grayson and I was dying to see him handle the character. See my full review here.

Uncanny X-Men #511 – Cancelled. When was the last time this book was any good? Fraction’s captions as each character is introduced are just too stupid and reek of someone who thinks he is too cool for school. Example: Logan-Wolverine, Claws, Mean, Not talking to Scott. My version: Fraction – Writer, Disjointed, Irrelevant, Only Thinks Liberal Thoughts – I mean it is not funny. The vibe is like some sort of in-joke or something, it really does not work for me and detracts from the flow of the story. Land’s art leaves me as cold as the writing. This is not to say that I will not pick up this title on occasion, just no longer always on the list.

Buck Rogers #1 – Cancelled. It was like I was reading the opening sequence of the first episode of Farscape. Instead of Buck Rogers it was John Cricthon. The costumes suck, the reworking the jump in time as the Farscape idea was obviously unoriginal. Sadly Buck does not make the cut. I’ll always have the

Unthinkable #2 (of 4) – The second issue read poorly as the book tries to be doing way too much. Then when you add in that the paper stock BOOM is using makes the comic feel thin and cheap and you have a book that had a great premise, but has lost me. Cancelled.

Batman Confidential #30 – Andrew Kreisberg has done a great job in the Batman Confidential book and this follow up to the Joker story was very enjoyable. Hard to believe it is the same guy writing Green Arrow / Black Canary. The bit with Barbara Gordon as a little girl was priceless. I hope to see more of this material with this creative team.

X-Factor #44 – I’m enjoying this series again and this issue was another good one in it is advancing but the Madrox/Layla future plot and the current story line. I mention this issue only because I’m sick of how fawning the vast majority of comic creators have become with Obama. Love or hate him, have the good sense to not anoint him as the second coming until you can judge the results of what he is doing. As much as I believed no one could be worse then Bush, I’m starting to think I was wrong, but the love affair is making me gag and I’m tired of this crap. All of this mini-rant is due to Layla telling Jamie that JFK Airport is now BHO Airport – blecch. Tell Peter David and the rest to make you viewpoints known, but stop trying to make someone into something so great when we are less then six months into his term.

Booster Gold #21 – This is the first comic from DC to have a co-feature and a $3.99 price tag as its regular price. This was a little daring tacking on a $4 price point for a marginal title like Booster Gold (came in at #103 on a recent sales chart with sales of 23,200). If the truth be told it saved me from canceling the title as I have been borderline on this book, but I wanted to see the Blue Beetle back up. As the actual story of Booster meeting Dick Grayson as Batman was good and Blue Beetle was a great start to the back up the whole plan worked. Plus we are getting 30 pages for our $4 entry fee.

The Life and Times of Savior 28 #3 – This series is really doing a nice job. While we have a lot of books that have a similar thematic basis, each is really its own thing and each one is doing a good job with its subject matter. Savior 28 is dead and we are now learning how we got from him being the world’s greatest hero to someone that his ex-partner felt had to be stopped. This issue explores what happens when the world’s most powerful hero tries to make the world a better place by being a spokesperson to help the world as opposed to actually trying to save the world.

Absolution #0 (of 6) – The fourth entry in the currently popular theme of examining what happens to a super hero once they cross a line. In this one we learn that the good guy has gone bad(?), from the stance that he is secretly killing people who he feels need to be killed. These are the bad guys that can’t be touched by legal means. On the surface he is still the altruistic good guy, so how long before he gets caught and then what does the government do with him? A good start to what should be a strong mini-series.

as Jack of Fables. This issue Fables has been turned into Jack’s book, which I have grown to dislike. One of the charms of Fables is it stayed within itself and I could just almost relax and enjoy a continuous read. Sandman, Preacher, Lucifer and other great long term Vertigo book never resorted to this gimmick and personally I see this as a low point in the Fables saga, especially since the book has just returned to excellence recently.

Flash Rebirth #3 (of 6) - The story is only okay, but the thing that I can’t help but notice is the pace of the story is so slow and this is for a character called the Flash. It is almost obvious that to you need a story that moves at top speed with almost every page being exciting to make this re-launch work. Plus the de-aging of Bart and sending the character back two steps is annoying. This series is decent, but I want it to be great.

Green Lantern Corps #37 - Sodom Yat appears to have sacrificed himself to turn Daxam sun yellow which gives super powers to all the citizens. That means super men and women galore versus the Sinestro Corps. Over on Oa it looks like Blackest Night is about to begin. The GL Universe is moving at a rapid pace right now and it looks like the proverbial crap is hitting the fan.

JSA vs Kobra The Engines of Faith #1 (of 6) – This was a nice start to this mini-series. It picks up on threads from Checkmate and what happened in the recent Kobra one shot. Right now this is the better JSA book as I have been unimpressed with Jerry Ordway’s take on the group as he has filled in on the regular series. Eric Trautmann did a great job with Power Girl, Mr. Terrific and the rest of the cast and Don Kramer is one of DC’s true art stars as his work is always top notch.

of my favorite DC books and fast moving up the list of favorite books. Tony Bedard is utilizing all of the material from the old Legion and Rebel series as well as bring in stuff from the LOSH. Plus this issue we see that Starro is an actual person and the starfish is his means to conquering galaxies. Fast paced, fun, dynamic, action packed and more, this is frankly comics done right.

Red Robin #1 -Writer Chris Yost, Art Ramon Bachs, Colors Guy Majors. Red Robin was good and bad. As I have learned over the years you should talk about the good first. Plain and simple the good is that the premise for the book is a solid idea. Tim (Drake) Wayne believes Bruce Wayne is alive in and out in the world somewhere and needs help. Tim will be the one to find and save him. Since the Robin costume has been taken, he picks up the often used Red Robin costume and takes off the find Bruce. The bad is the actual execution and the way the first issue was told. It was very jumpy and went from past to future and place to place with almost no rhyme or reason. Tim stops a kidnapping in Spain, we cut to Czechoslovakia for some reason and then Tim is in Paris and stopping a crime. In between we jump to the past and see Tim get pissed about Dick wanting to have Damian as Robin. Tim gets pissed and breaks some stuff and says Bruce is alive and then goes on his quest. There is no rhyme or reason to why he comes to this conclusion. See my full review here.

Miss America Comics 70th Anniversary Special – The first story was very good. I have really been enjoying the new tales of the Golden Age Marvel heroes. This story focused on Miss America had plenty of story and plot, great action, great artwork and was flat out a good fast paced well done comic. The Golden Age back ups are always fun. Marvel ahs done a great job with these anniversary books and DC should be taking notes.

So while the worst beat out the best, it was still a solid and entertaining week of books.
Posted by Jim at Tuesday, June 16, 2009