Mini Comics and You...

Mini Comics are something that I know very little about. Ask me about Marvel Comics from 1963 until the mid-90's and there's a good chance I know the answer. Ask me about mini-comics and you'll get a blank stare. I do know that many indie creators started out creating mini-comics. Long before the internet, mini's were a great way to gain experience creating comics and get your material out to a larger audience. These days, webcomics have all but replaced mini's.
Brian John Mitchell decided to go old school and make comics. He printed up some mini's and sent them for us to review. Each mini is 2"x 2"and 26 pages long. Standard to mini's, there is one panel per page. 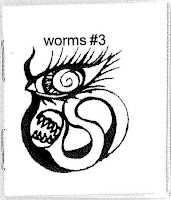 Worms #3, (w) Brian John Mitchell (a) Kimberlee Traub
Worms is a fairly straight forward horror story. Our heroine wakes up in an institution where bizarre medical experiments are being conducted. Now, she is one of the experiments.

Of the three books Brian sent, this was the weakest. It's a fairly straight forward horror story with some bizarre moments. The art is typical of what I expect in mini-comics. By that, I mean it is very raw, and the artist needs to develop anatomy & proportion. In addition, the single panel format really forces the artist to make the most of the little composition space. Sometimes, Traub succeeded, sometimes she didn't. There's nothing particularly wrong with this, but neither was there anything to particularly draw me in. 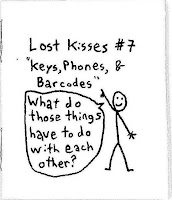 Lost Kisses #7, "Keys, Phones, & Barcodes"
Written by Brian John Mitchell, this is what I always imagined mini comics would be. A small rant against the world told in single panel format. In this issue, Brian rants about an ex-girlfriend who is still acting like his girlfriend, and his inability to confront her.

What you see on the cover, and below, if what you get. This is stick-figure theatre at it's best. The stick person is there to provide something to look at other than words, and little else.

What makes this so much fun is the internal monologue Mr. Stick goes through. Brian has a stream of consciousness discussion for 26 fun filled pages. I liked this particular story because I could relate to it. As someone who has trouble dealing with confrontation, there was many a smile to be had.

Here are some pages from the inside - 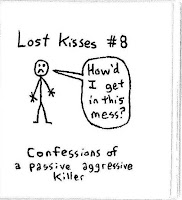 Lost Kisses #8, "Confessions of a Passive Aggressive Killer"
This issue presented contained another internal monologue about the ex-girlfriend. It's entertaining and much like issue #7.

Overall, these weren't groundbreaking but they were fun in a fun format. If you're looking for something different, then this could be for you. And, if you've ever wondered how to easily self publish, this is a good way to do it.

The comics cost $1 and get be gotten at the Lost Kisses website here
AND, and, Brian is affiliated with an independent record label here.
Posted by Lee at Thursday, June 11, 2009