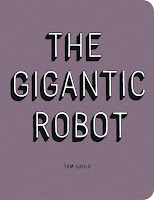 Buenaventura Press
Gigantic Robot HC by (W/A) Tom Gauld Drawn in a beautifully simple style, Tom Gauld's The Gigantic Robot is a wry fable about war, weapons, and waste. Leisurely paced, the comic follows the production of an impressive secret weapon whose promises go unfulfilled and who, in the end, loses the battle. There's nothing in comics like Gauld's marriage of streamlined prose and playfully precise art. $16.95 Visit Tom here

Lee: Maybe it’s the thought of a giant robot that made me choose this because the cover is about as nondescript as you can get. Visiting the website, and reading Gauld other previews, sold me on this. Gauld has a simplistic art style and vicious sense of humor. I bet this is very good.
Jim: I love the premise as it sounds like a good story. Without Lee's link though the marketing of a book like this with a bland cover is a bad idea. 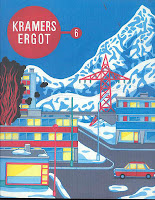 Lee: If you like indie comics, and anthologies such as Mome from Fantagraphics then this is the book for you. Ergot is cutting edge is a collection of cutting edge comics that really push the medium. More than art, more than men in tights, this is a really cool book.
Jim: Sounds a little too much like bad art work masquerading as art. Whenever someone says art is progressive or cutting edge it sounds too much like what was called modern art, which was often crap. Plus $35 to look at a bunch of different unknowns is too big of a price tag.

Candlewick Press
Outlaw: Legend of Robin Hood GN by (W) Tony Lee (A) Sam Hart, Artur Jujita
How did Robin of Loxley become Robin Hood? Why did he choose to fight injustice instead of robbing for his own gain? Expressive and gritty, this graphic novel whisks readers back to Crusades-era England, where the Sheriff of Nottingham rules with an iron first, and in the haunted heart of Sherwood Forest, a defiant rogue-with the help of his men and the lovely Maid Marian-disguises himself to become an outlaw. 160 pgs, $11.99 Visit Same Hart here

Lee: We get new books on The Phantom, Zorro, and even Buck Rogers all the time, but for some reason we don’t get a lot of Robin Hood books. I still remember watching Errol Flynn’s version of Robin Hood on Saturday mornings/afternoons so I have a soft spot for this material. I like Hart’s art and he’s had enough experience that I trust he can tell a story. If nostalgia gets the better of me between now and order time, I might have to try this on.
Jim: I love the old Robin Hood legends and this book sounds like a good one. Plus it is only $12 so I'm signing up for this one. 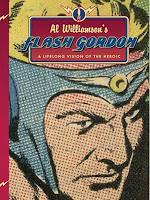 Comics Books
Al Williamson's Flash Gordon: A Lifelong Vision of the Heroic HC
Edited by Mark Schultz. Introduction by Sergio Aragones. Al Williamson is widely acclaimed as the artist who best exemplifies the original spirit of Alex Raymond's creation, as well as being the most distinctive and lyric. Collects all the major works of the artist featuring the character. The book encompasses Williamson's three stints of depicting Flash in comic book format: the King Comics stories from the 1960s, the 1980 adaptation of the Universal Flash Gordon motion picture, and the Marvel Comics mini-series of 1994. Plus, Williamson's Flash drawings done for commercial illustration and prints, his assists on the Flash Gordon comic strip, a variety of Flash images contributed to amateur publications, and a selection of largely unpublished images. Available as a hardcover or a softcover. 256 pgs, FC, $44.95

Lee: Al Williamson is one of the greatest comic book artists ever. And, by many accounts, Flash Gordon was some of his best work. I am looking forward to this for the art, but I know the story is good too, so this is an easy buy.
Jim: I want to pull the trigger on this one as Al Williamson is one of the true masters of the artform, but Flash Gordon is not a favorite of mine. I'm totally on the fence on this book.

D. D. P. / Devil's Due Publishing
I Am Legion SC by Writer: Fabien Nury Cover & Artist: John Cassaday
World War II rages as two supernatural entities pursue collide in a conflict hinged on ideologies and the lives of men. The outcome will decide the end of the war itself! Beneath it all, the Nazi pursue a project called LEGION, centering on a young Romanian girl with powerful abilities. $18.99

Lee: A book with Cassaday art! How did I miss this? I seem to remember the series but I don’t remember hearing anything about it. Nazi and supernatural elements clash and all beautifully rendered by John Cassady. This is an easy buy.
Jim: I have been reading the comic and it has been hard to follow as the story is very detailed and dense with a fair number of characters being key to the story. While as a series the book has lacked something I have enjoyed the art a lot and the story enough to buy the trade. I beleive it was meant to be read as one story and the gaps between issues have hurt this book.

:01 First Second
Cat Burgler Black GN by (W/A) Richard Sala When K. Westree arrives at Bellsong Academy, she thinks she's left her cat-burglaring past behind her. But K. soon discovers the school has a mystery of its own - and she's the only one who has a chance of solving it! $16.99

Lee: MORE RICHARD SALA! I have most everything he’s ever done and I’ve loved it all. Sala is one of the greats at creepy, spooky, eerie art. He’s right up there with Gorey and Adams. This will definitely be coming home with me.
Jim: This is something I'm totally unfamiliar with. so we will have to go with what Lee says.

Color of Heaven GN by (W/A) Kim Dong Hwa
In the heartwarming conclusion to this lyrically written and delicately drawn trilogy about a girl coming of age in turn-of-the-century rural Korea, Ehwa's true love comes at last, and as her mother looks on, she takes the final steps towards becoming an adult. $16.99 An interview with Hwa with generic preview pages here BUT a highly recommended 16 page preview here

Lee: Here’s something different, a Korean slice of life book! Yes, this is the third book in the trilogy but that doesn’t mean you can’t get it. As a story about people, this sounds really interesting. I found this interesting then made the mistake of reading the 16 page preview. Now I am completely sold. Read the preview!
Jim: This is where Lee and I usually part company. Lee loves the slice of life stuff to death, add the coming of age phrase and you have him hook, line and sinker. Now in fairness I skipped the preview because the premise is not appealing to me at all.

Stuffed GN by (W) Glenn Eichler (A) Nick Bertozzi
When Tim and his wife inherit his father's museum of curiosities and find herein a taxidermied African warrior (The Savage, or so the museum's placard labels him), Tim's quiet suburban life starts spiraling out of control. A dark comedy about family, race, and politics by Glenn Eichler and Nick Bertozzi. From the writer of The Colbert Report and the creator of Daria. $17.99 Visit Nick’s website here

Lee: First Second has quickly become one of the best independent publishers these days. The premise here sounds interesting even with the weak hype. I really like Bertozzi’s art so I’m willing to give this a try.
Jim: Pass. For so many reasons that I will not bore you with them.

Fantagraphics Books
Captain Easy Vol. 01: Soldier of Fortune HC by Roy Crane Roy
Crane is a GIANT among cartoonists and Fantagraphics is embarking upon an ambitious reprinting of his best work within Captain Easy, Soldier Of Forturne. Dig in and bask in the radiance of these FULL COLOR, prismatic Sunday strips! Discover with each page a buried treasure of adventure and chicanery replete with Crane's mastery of comics storytelling. Citing Crane's influence on comics, the artist Gil Kane once said, Superman was Captain Easy; Batman was Captain Easy. BEWARE! Beautiful women! Pirates! Sunken ships! And fun! fun! FUN! are barely contained within this beautiful package brought to you by Fantagraphics, the torchbearer of quality when it comes to classic comic strip reprints. 10.5 x 14.75, 160 pages, FC, $35.00

Lee: One of the reason I love these old reprints is because I want to see who influences some of my favorite artists. If Gil Kane said this was good then that’s the best recommendation there is.
Jim: Count me in on this one too. Plus Fantagraphics is a publisher that you can trust. 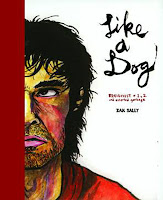 Like a Dog HC by Zak Sally A DELUXE COLLECTION OF SHORT STORIES FROM THE ACCLAIMED ARTIST Zak Sally is the renaissance man best know for his 15-year career as a musician, having anchored the Duluth, Minnesota band Low for over a decade in addition to moonlighting with the Dirty Three, Enemymine, Hot Tears, and Kid Dakota, and making cameos in movies like Shopgirl. He also is an acclaimed cartoonist and operates his own small press, La Mano, in Minneapolis.Of all of Sally’s creative pursuits, Like a Dog is the one he’s been working a lifetime toward. This hardcover book collects the best of his acclaimed short stories from the past 15 years, created in between band tours and recording sessions for publications like Mome, The Drama, Your Flesh, Dirty Stories, The Recidivist, and more. Like a Dog spotlights Sally’s uncanny ability to create emotional havoc out of claustrophobic images, situations and dialogue. Stories like “Don’t Move,” “The War Back Home,” and “Two Idiot Brothers” share little in common on the surface but are united by Sally’s forbidding style, creating a sense of dread that permeates almost every page.Sally also turns his eye towards nonfiction in Like a Dog, including “At the Scaffold,” the story of the imprisonment and trial of Fyodor Dostoyevsky for allegedly subversive behavior, and “The Man Who Killed Wally Wood,” a story about Sally’s brush with a former publisher of the legendary comic artist. It also includes “Dread,” a collaboration with NEA Fellowship recipient, Edgar Award finalist, and O. Henry Award winning author Brian Evenson (Altmann’s Tongue). Like a Dog will also include extensive “liner notes” by the artist, previously unpublished material, and other surprises. 7 x 10.25, 144 pages, PC, $22.99

Lee: Ok, I have to admit that this hype isn’t the hype that you will find in the Previews. While researching this book, I found this write up which is WAY more interesting that the drivel previews put together. I had limited interest based upon original previews but after reading this I’m very interested. Sally’s art is very cool too. So much for me not adding this to the collection.
Jim:I think Lee likes it because the guy is in a band. Lee has certain hot buttons and the music comic connection is strong in Lee. I can sense the music/comic force in him and it is strong.