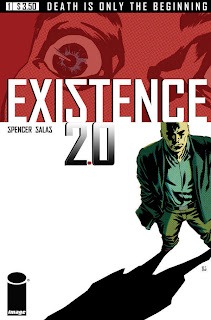 Existence 2.0 #1 (of 3)
Publisher Image Comics
Release Date July 1
Writer Nick Spencer
Artist Ron Salas
It’s a Phillip Dick short story merged with the noir genre and set to the pace of the movie Crank. All in all as first issues go, this was a hell of a good ride and a book worth seeking out for your own perusal.

The book opens with the death of a scientist Sylvester Baladine. A hit man is stabbing him 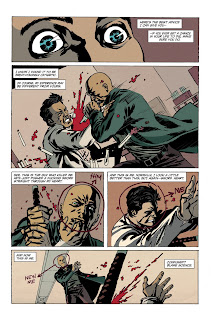 through his heart and we learn that he has been working on a machine to transfer consciousness from one person to another. He also has a remote in his hand and hits the button as he is being killed and instantly he is now in his killer’s body.

As any of us would ask if we survived our death, Sylvester asks who the heck wanted him dead. Hopefully unlike most of it, his list of people who would have been happy to see him die is rather long. From there the action and pace of the book never lets up.

The art work on this book has the same type of feel that Sean Phillips gets with Criminal. It is a realistic style that is simplified as far as heavy details go, but sophisticated and professional in the ability of the artist to tell a story. One thing that often concerns me with some artists who I’m unfamiliar with is there ability to distinquish between the characters. This was never an issue with this book as all the characters I needed to be able to tell apart I could. The action was well done, the layouts were great and the writing and art went hand in hand to keep the pace of this book always at a high energy level, which is why I equated it to crank.

The dark tone of the coloring and the fact that the main character is a real bastard is certainly part of this book’s noir feel. Plus we start with his death and then go backwards and forwards. 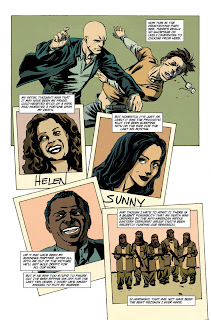 We find out he skims money from the business, has a mistress on the side and is generally a real SOB. It is only his scientific brilliance and ability to make a lot of money that probably keeps anyone near him.

The Phillip K. Dick aspect of the story comes into play as Dick always did great things about identity. What are we and what makes someone who they are, were themes in many of Dick’s work. This book started to touch on those things as our main guy Sylvester is learning that his body knows a lot of what to do by itself. Of course we have not even had the chance to see what the long term implications are of becoming someone else (although Heinlein’s I Will Fear No Evil also played with what is identity in a similar scenario).

The issue ends with Sylvester trying to find out who wants him dead, who the killer (now him) is working for and what happened to his daughter (as his daughter has been kidnapped). A lot is going on and it is all happening at a breakneck pace.

Some of the overall ideas and concepts are just thrown out there for our amusement and some of the story begs for a little bit more of an exploration of what is going on. Also I think there are 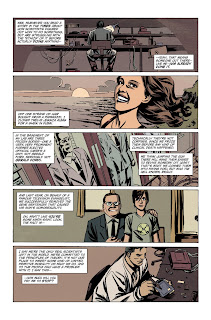 a few plot points that appear to have some holes in them, but all in all these guys made the right decision with this book. My complaints with the book can be resolved by the time with get to the end of the story and if they slowed it down in the first issue it would have taken away from the pure high energy excitement you get by reading this book. It is one of those books where you start to skim read it to get to the next page.

Overall Grade A – A great fast paced action/adventure/noir story with some great concepts and ideas thrown in just to keep it interesting.

And don’t just take my word for it, do a Google search on this book and I have yet to find a bad review. In a summer of Batman and Robin, Blackest Night, Wednesday Comics, Dark Reign, Captain America Reborn (all books that are or should be good) it is easy to miss a book from a smaller publisher. Now if you miss Existence I won’t say you r life will be over, but maybe your chance at life 2.0 could be hampered.
Posted by Jim at Monday, June 22, 2009